I mentioned the SC/MP, National Semiconductor’s Simple Cost-Effective Micro
Processor, in my “Introduce Yourself” note as my first microcomputer. So I
wanted to offer some further documentation of that experience.

It was 1975 when the SC/MP kit came out and I upgraded mine to SC/MP II as
soon as the upgrade came out. The first photo shows the 512 byte SCMPKIT 5204
ROM in the upper left corner. Next are two 2101 static RAM chips providing 256
bytes of programmable memory. The white button on the right is a reset button
that reboots the ROM monitor program.

Part of the appeal of the Scamp kit was its builtin serial interface at 110
baud for use with a Teletype machine as its I/O device. To use this you had to
build an RS-232 interface as shown in the prototyping area on the lower part
of the board and the connector on the end of the white cord. This was done
according to instructions in the Scamp kit documentation.

All of this worked as claimed in the documentation that came with the
Scamp. Yes, I really did use a Teletype to communicate with the Scamp. At the
time I worked as a systems programmer with a Prime 200 minicomputer at the
Atmospheric Sciences Department at the University of Washington. This was part
of the team that put two Viking Landers on the surface of Mars, and the Prime
was used to store and analyse the atmospheric data that was sent back by
telemetry over the next several years. The Prime computer used a Teletype as
its console I/O device. And at the same time I had just started my effort
toward a master’s degree in the Computer Science department while working
full time.

As you can probably imagine the 256 bytes of RAM was extremely confining as
far as doing anything very useful or interesting in software. I found the
Morrow MicroStuff 4k x 8 Naked RAM board as a candidate for expanding memory
to a useful capacity. The board contains 32 Intel chips marked as A7621A, and
other markings as 5039927 MOS, but I have been unsuccessful finding any data
for these chips. The board has jumpers in the upper left corner for Bank
Select LO and HI, and Page Select 0 through 7, but I don’t recall how these
were supposed to work. At the time, circa 1975, I tried to interface the
memory board to the Scamp through 2 by 36 backplane connectors, but I was
never successful getting it to work. The second photo shows the backs of the
two boards where I tried to hook up an interface using wire wrap wire
carefully soldered in for the backplane connectors.

A couple of years later I had the pleasure of meeting George Morrow and his
wife at his house in Berkeley, California. He was a delight to talk to, full
of ideas and enthusiasm about the future of microcomputers. A doubt if I ever
asked him about the Naked RAM board. By that time we had both moved on to
other things. 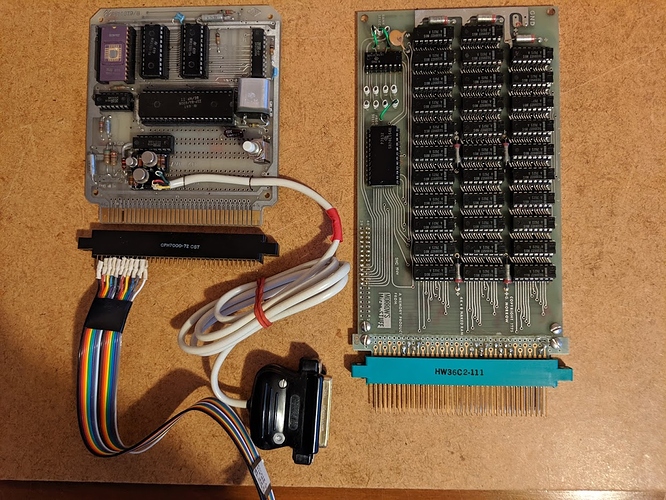 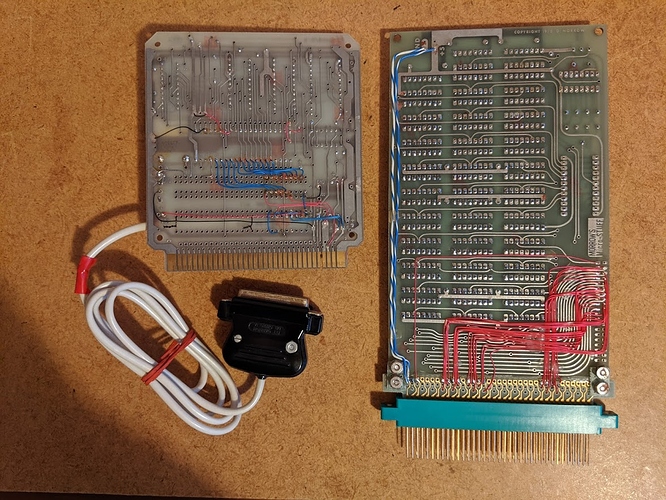