Teaching, at university, with 8 bit micros and Basic 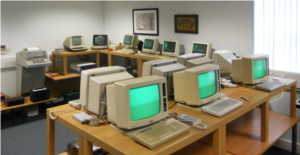 The Minimal Computing Lab at the Centre for Textual Studies (CTS) at De Montfort University (Leicester, England) was created to help students of arts and humanities subjects to understand how computers work, with a special focus on how they can store and process writing.

At some point, BASIC and the Altair 8800 or the Amstrad PCW are inevitably not powerful enough for the students’ ambitions. With even a relatively short piece of text such as Chapter One of Jane Austen’s novel Persuasion , a word-frequency analysis running in BASIC might take days to complete. (We can mitigate this by using our Teletype machine as the console and leaving it on all week; the results will be captured on paper even if they appear at 3am on a Tuesday, and cannot ‘scroll’ off the screen as with a VDU.)

As a college educator with a passion for old machines … this is my favorite thing that I’ve seen in a while. It looks like they’ve been doing it for half a decade or more, I’m sorry I just found out about it!

The Amstrad PCW taught me that there are many different ways to relate to computers, and importantly, many of them were just as valid as any formally correct method.

I was brought up around computers. I knew about files and organization and all the things you should do in working with computers. My partner, however, had never worked with computers and needed one to write her PhD thesis. Someone had advised her to get an Amstrad PCW, and she’d written most of the thesis on it before we were together.

One of the charming features of LocoScript on the PCW9512 was the way it used the screen character memory to play through the document as it checked the spelling. If you were a fast reader, your could use this scrolling display to proof-read your work.

For final printing, though, I’d got LocoScript for my 386 and we were going to print the 450+ pages on a DeskJet 500 and a couple of reams of Mellotex (a now-discontinued very high quality repro paper). It was certainly going to be more restful than banging out all the pages on the PCW’s painfully slow daisywheel.

Catherine wanted to do one last spell check, so we started it, and … no scrolling display! How was anyone supposed to proof-read if you didn’t get the text scrolling by as it checked? Here was an advance in technology that was counter to human expectations: a 32-bit machine that didn’t provide the utility of an 8-bit one.

Was reminded of this thread which might benefit from a bump.

Two other papers of interest from this Minimal Computing project:

One of the charming features of LocoScript on the PCW9512 was…

I particularly like the PCW for its minimal bootstrap approach: there’s really nothing there until it loads code from the floppy. As a consequence, if you boot with a Locoscript disk, you get a word processor. If you boot with a CP/M disk, you get a command-line based OS. It’s even more illustrative and educational and minimal than boot-to-Basic, although it’s by no means as instant.

With a conventional desktop PC, you learn when you swap hard drives that the personality and content of the machine is held in the drive, and you learn that in a visceral way.

It’s a nice thing, in my view, about the Pi, for all that it’s not perfect: you put in an SD card with your project on, and that’s what you’ve got. You can break a Pi and replace it, or turn up to a class and pick a Pi out of a box, and all that matters is the SD card you boot with. (Or, these days, a thumb drive.) And that SD card can boot to one of several linux distributions, or to a bare metal project, or to RISC OS, and so on.)

People also liked that about the Xerox Alto: your whole world was not in the machine but in the pizza disk sitting on your desk. Taking that disk to any Alto would make it your own. When microcomputers were floppy only (between the tape and hard disk eras) they were like this as well.

This is why Steve Jobs tried to push the optical disk only configuration for the original NeXT machines and he made a big deal about it in his early demos. Sadly, Unix needs a fast disk so he was forced to ship a hard disk with each machine and students would no longer be able to do what he had said.