I recently found this website in German, but showing screenshots of different version, ads and a video (in English). There was even WinMate. Has anybody used that? Or other windowing systems for DOS? Personally, I only used ViewMax on DRDOS (next to Windows 3.0).
But why using another GUI (unless you don’t want to support Microsoft). What software were there, only the included office tools? But nice retro graphics. Pictured is the 1986 version. 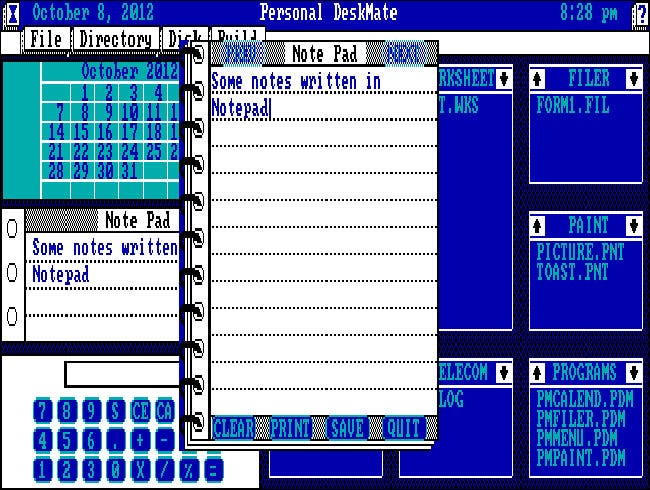 Another English site with downloads

My first computer was a Tandy 1000 RSX. It has a 25MHz 80386SX processor, 4MB of RAM and 100MB hard disk drive. With the small hard disk drive, not many software could be installed, only Tandy Deskmate, Windows 3.1, Microsoft Office 4.3 and some... DeskMate is a software application that provides a graphical operating environment. It originally was for Tandy Corporation's TRSDOS Operating System for their TRS-80 line of computers, but eventually shifted to MS-DOS. Like GEM from Digital Research, it is not a full operating system, but runs on top an existing system. Initial ports only ran on Tandy's PCs such as the Tandy 1000, but later became available for true IBM PC compatibles and competed with early versions of Microsoft Windows. Some ...

Considering at the time MSWindows wasn’t as established/entrenched as it is now. Consider that the GEM Desktop was for a time an equivalent competitor. And DeskMate, as a runtime environment (there were applications written specifically to run under DeskMate) was less resource-intensive than MSWindows (even then).

At one time I had the developer toolkit for DeskMate. One particular feature I remember from it was that the desktop was actually a much larger virtual space, and the UI would render down to what your system’s actual resolution was. The UI looks pretty crude now (OK, it was probably a bit crude even then) but if you compare it to MSWin 1.x (and perhaps 2.x) and even more so GEM Desktop, it wasn’t so far away from it’s competitors.

And since RadioShack was still a viable operation with a large network of stores, it had a good distribution network. I had 3 or 4 of the 3rd-party DeskMate applications at the time (a music editor, a port of PFS:First Publisher, and others I can’t remember all these years later). Lotus ported 1-2-3 to it, as well as a database application from Small Computer Company.