Steve Wozniak on his early- to mid-'70s work

Over in another thread I mentioned that SmartyKit was having a “webinar” about their product. I stayed up far too late last night/this morning (it occurred at 03:00-04:00 Tokyo time) to watch it, but it turned out to be well worthwhile because Steve Wozniak (!) showed up and spent more than twenty minutes talking about the Apple 1 and other things from the early- to mid-70s.

(I have no idea why, and it’s probably a bit silly, but it felt to me pretty amazing to have him talking there “live,” as opposed to listening to a recording, even though I’m sure he had no idea I was there. It felt almost like meeting him; this was probably as close as I’ll ever get to that.)

Here are my notes on what Woz said.

Excellent! There’s a photo of the cream soda computer, and some quoted words from Woz, here. 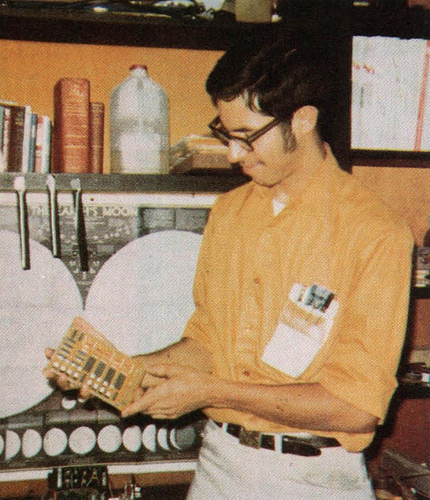 image965×1121 514 KB
Caption: “In 1971, Wozniak and a close friend, William Fernandez, built a small 8-bit computer made out of logic ICs. Fernandez (above left) holds the computer in his hand.”
From: Stan Augartner’s rather good illustrated history “Bit by bit”

There’s at least one version of 101 BASIC Computer Games online. Time to type in some Basic!

The movie “Pirates of Silicon Valley” replaced Bill with Steve Jobs in the scene about this computer.

Perhaps best known as the guy who introduced Steve Jobs and Steve Wozniak, Bill Fernandez speaks out on Apple's founding magic, how love built the first Mac, and the interface of the future.

Daniel Kottke, one of Apple’s first dozen employees, said, “[In 1976] the Apple II did not even work. Woz’s prototype worked. But when they laid it out as a circuit board, it did not work reliably… It was unacceptable. And Woz did not have the skills to fix that… But, it was even worse than that. They did not even have a schematic.”

Newly funded by investors, Apple had just hired Rod Holt as the company’s first engineering chief, and this was one of the big problems that Holt walked into when he took the job. At the time Woz’s Apple II prototype was a bunch of wires and chips in a cardboard shoebox. The tiny Apple team had to take this amazing concept machine and turn it into a product that could be manufactured and sold in stores.

When it came to computers and electronics, few people knew the workings of Wozniak’s mind better than Fernandez. The two had grown up as neighbors and had known each other since the fourth grade. In high school, Fernandez told Wozniak that there was a kid he needed to meet because he was into electronics and practical jokes just like Woz. It was a kid named Steve Jobs. Later, Wozniak acquired a bunch of different electronics parts and took them to Fernandez’s garage, where the pair worked on assembling the stuff into their own working computer that was years ahead of its time. Then, before Apple got started, Woz helped Fernandez get a technician job at Hewlett-Packard, where Wozniak was an entry-level engineer. So the two had a lot of history together.

A decade (or so) ago I had the pleasure to do an interview with Fernandez for an Italian magazine. I later republished it online on my website Stories of Apple.