Interesting, but not a new idea… For a more ‘retro’ one, then … 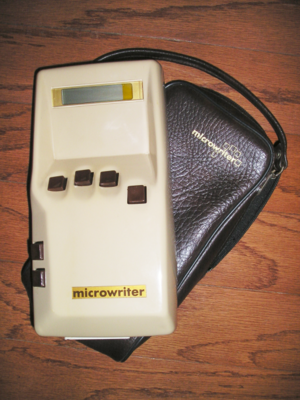 The Microwriter is a hand-held portable word-processor with a chording keyboard. First demonstrated in 1978, it was invented by UK-based, US-born film director Cy Endfield and his partner Chris Rainey and was marketed in the early 1980s by Microwriter Ltd, of Mitcham, Surrey, UK. By using a mnemonic alphabet, it was claimed[by whom?] to allow note-taking of up to 8,000 characters at an input rate averaging 1.5 times that of handwriting. Although there was an earlier unit with an LED display, the...

There was also a spin-off called the Quinkey which you could use with a BBC Micro and I used one for a short while, however after not using it for a week or 2, I more or less forgot how to use it, so never bothered after that…

I remember reading about some later chord keyboard in some computing mag in … mid-1980s?

Fun fact: Chorded keyboards (at least the Engelbart ones) are just manual input devices for Baudot code. Be your own ticker tape!

Edit: with 12 keys, we could go fully EBCDIC.
(Mind that there are never more than three punch holes or keys to be pressed at once in classic Holerith code.)

Vik Olliver (one of the hardware designers at Amstrad, and later a 3d printing pioneer) worked on Microwriters and Quinkeys, and has released an Arduino-based 3d-printed Microwriter-alike: VikOlliver/Microwriter: A reboot of the 80’s Microwriter accessible chord keyboard done using an Arduino. I built one, and it worked quite well, but the choice of switches needs a little work.

Other chording devices that see other than niche usage:

As I (currently — until the end of the month) work for an assistive technology charity, I couldn’t pass up the chance to mentioned the inverse of chording keyboards: single-key Morse keyboards! These help people with very limited movement to access computers. For instance, one person I know of wrote their entire PhD thesis using a bite switch and morse controller. An example of a very advanced one of these input devices is the Feather All-in-One Switch from Makers Making Change, the group I work for.