Shelfies: bookshelves with a retrocomputing angle

I have been known to take photos of bookshelves, especially when visiting computer museums. Perhaps some of the titles will spark some recognition. I’ll include one of my own bookshelves, and I’ll leave it as a puzzle as to which is which. We have Leicester, Cambridge, Swindon, Bletchley Park, Fimber, and home sweet home - but not necessarily in that order. Do share your own shelfies, of your own shelves or of some you’ve seen. 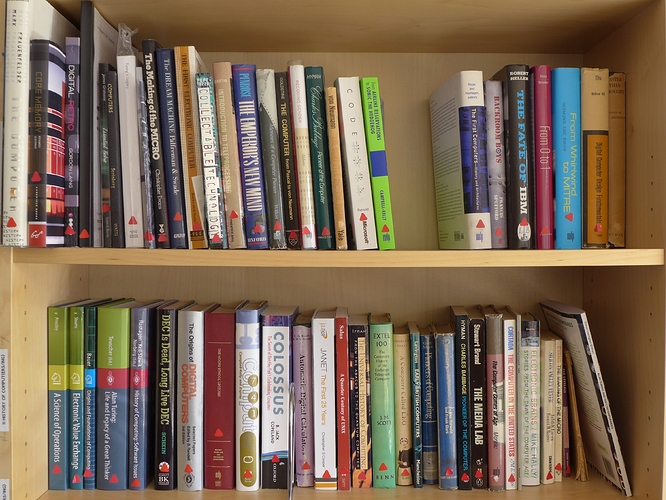 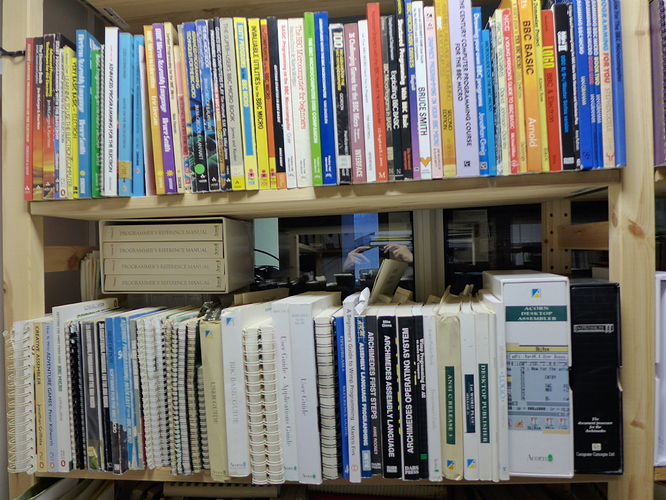 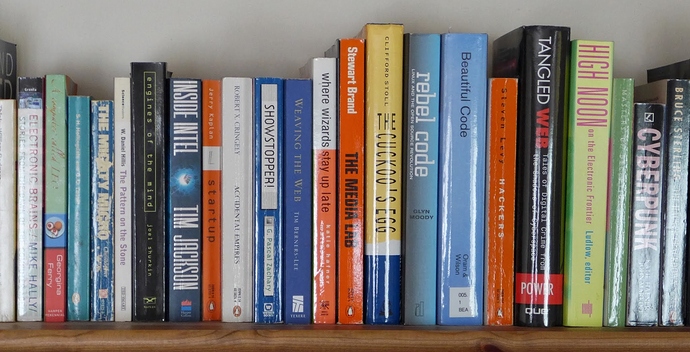 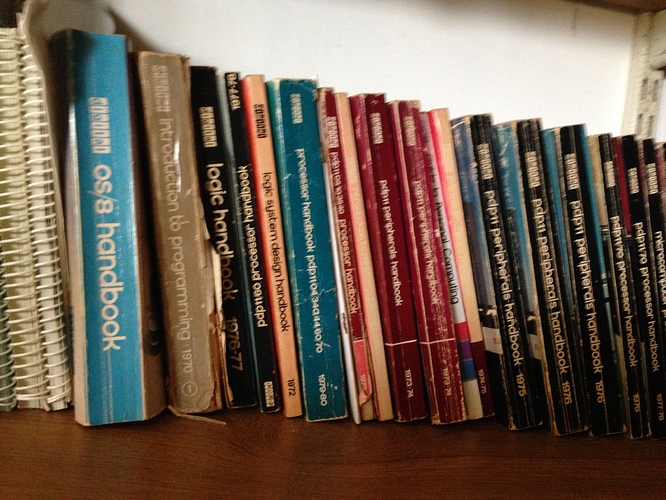 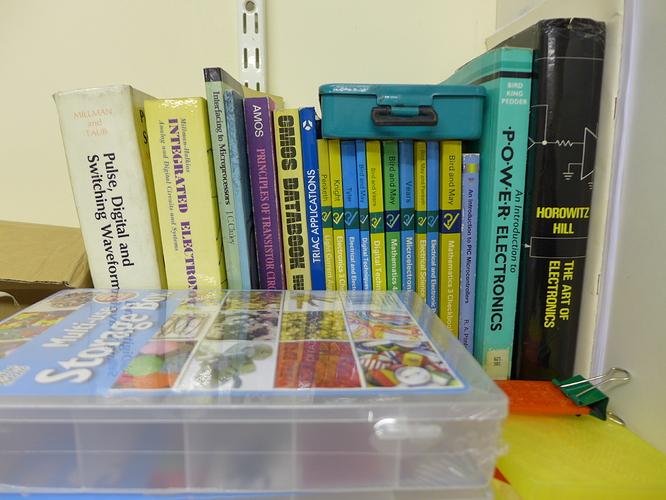 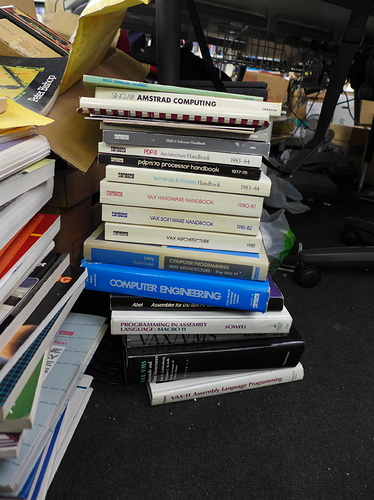 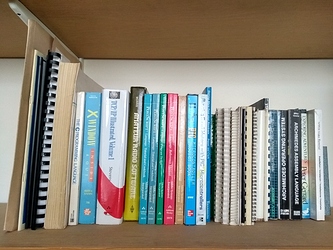 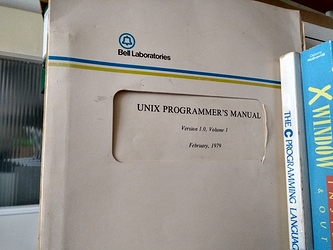 Not as impressive as your pics, but this is my bookshelf here in the office. Mostly my own books, brought from home to save some shelf space there!

Edit: Just to add - the large folder on the far left is my O level Computer Science project from 1984. Mainly handwritten, with dot matrix listings and stencilled flowcharts.

Excellent! I get an unreasonable amount of pleasure from shelfies. You have a few unusual ones there too, as well as a small handful of overlaps with my own shelves. We can see why spiral bound books are a little unsatisfactory for this purpose.

Also, on the end of the row - probably the most useful book I had for a couple of years:

Finally got round to this - well one shelf for now… A lot of the books I have are ring-bound or just flat with no real spine, so you don’t get to see, however here’s something to go on with: 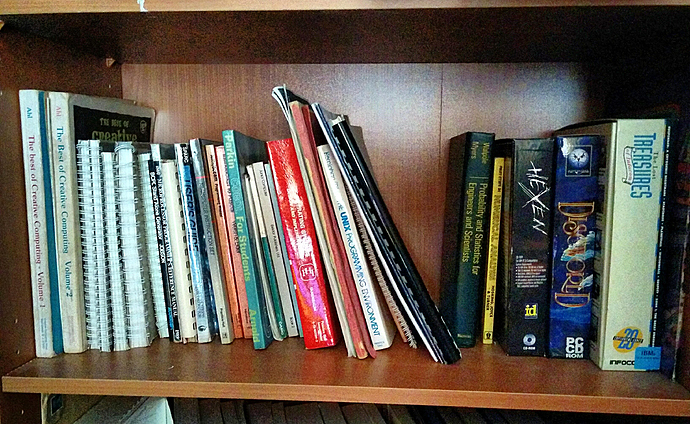 The wire ring bound ones are mostly Apple II manuals the plastic spiral-wrap one is the Softworks Adventure Games Toolkit. The tatty red one is The WozPack II …

Enjoy recognising the others

Another shelfie - this one not quite retro, so I thought I’d put it in a separate message: 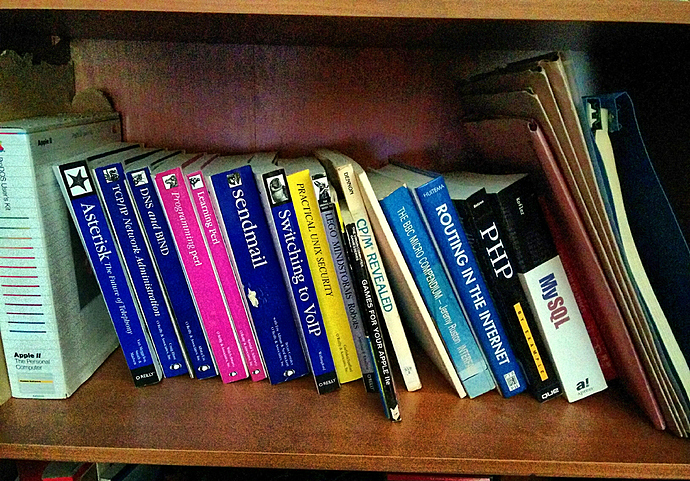 Although there is one big Apple II one to the left, and an “illegal” book in the midst if you know what you’re looking for … The blue folder at the far-right is a listing of a big set of 8080 assembly programs I wrote some 35 years back - the last time I wrote any assembler on an 8080/z80.

A few books I inherited from another professor: 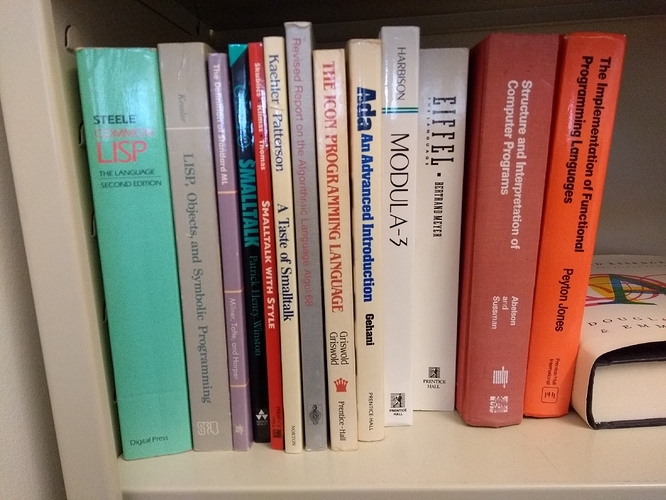 Gave me a good excuse to reorder my shelves… so here goes, four shelves in two images. Not all retrocomputing as such, but bear with me. 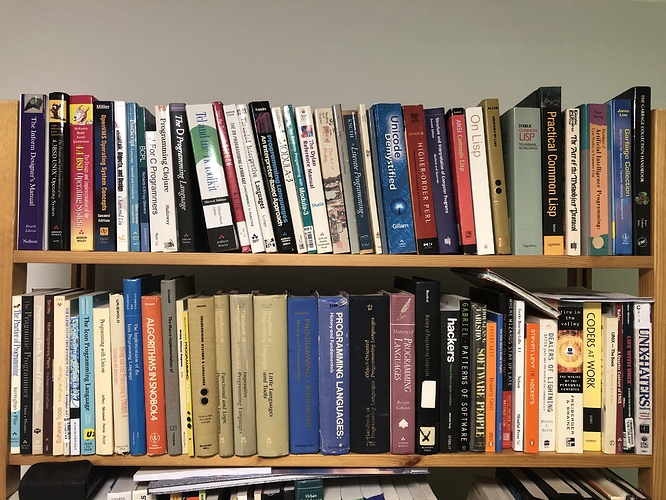 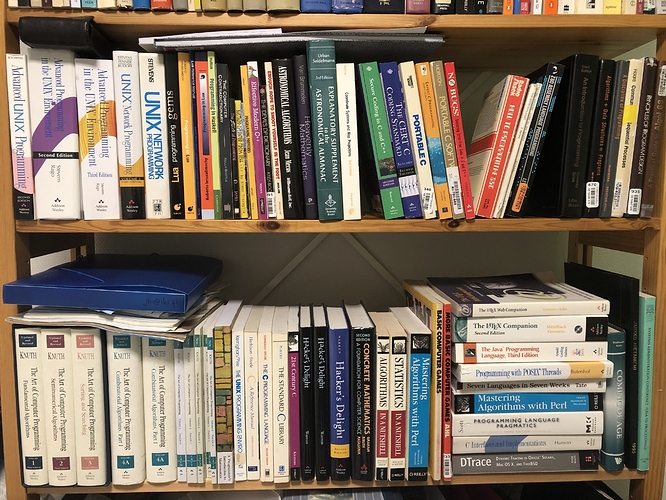 I found I’d got quite a few books lying around and not at all shelved - some recent purchases, some pulled out to look something up - so I did a bit of shuffling and found a shelf I could populate, in relatively random order. 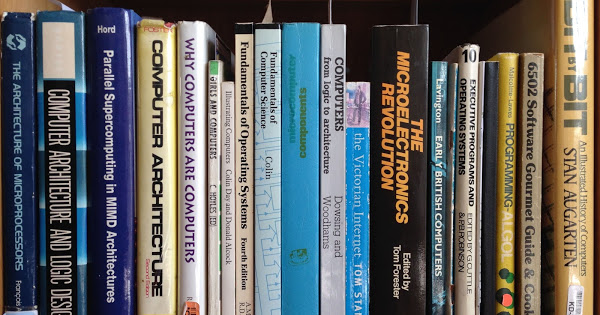 My PDP-11 stack (not including DEC manuals). The Minicomputer in the Laboratory is particularly interesting, as it’s about helping scientists use those new-fangled computer things to do work. 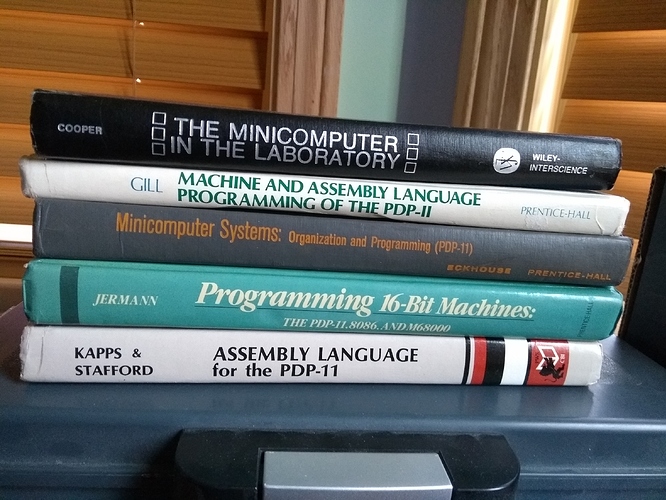 My PDP-11 stack (not including DEC manuals).

I was kind of hoping someone would post a legacy photo of the “Wall of Orange” that was a VMS documentation set back in the day.

I was kind of hoping someone would post a legacy photo of the “Wall of Orange” that was a VMS documentation set back in the day.

I don’t have that, but I have the RT11 wall of orange!

I don’t have that, but I have the RT11 wall of orange! 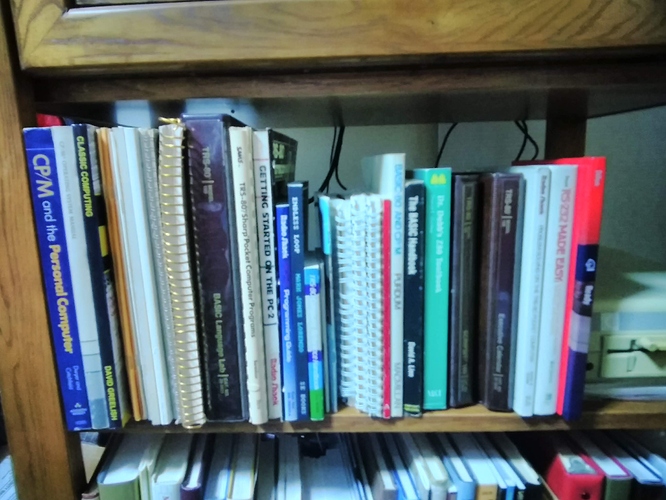 The pocket computers are a fascinating species!

This book stood out as different from your others:

Yes, there are a couple new books. The history of the BASIC language is interesting.

I’ve always liked the pocket computers. I had a PC-4 through college. With only 1.5K, you could do alot.
When I got a PC-2 in my lot from the Radio Shack auction, I started exploring that. Not many people know that the PC-2 was as powerful as the desktop PCs of the time.

Endless Loop : The History of the BASIC Programming Language by Mark Jones Lorenzo

Obviously I haven’t read the book, but from the description, and then someone else’s review, it’s a shame that it seems to be incomplete.

The weakest part of this book is that it does not really cover the rise of minicomputers in the middle 1960’s and early 1970’s and the prevalence of various dialects of BASIC on these machines, at the insistence of their customers and users, most of whom had learned BASIC at college. Prior to microcomputers appearing in the mid-1970’s minicomputers gave rise to automation in many industries and fields that it had not been economically or technically feasible to automate with mainframes. The book has some mentions of DEC (which was famous for it’s BASIC) but so was HP, Data General, Wang, Prime & MAI to name some of the major minicomputer firms that not only offered BASIC, but pushed it heavily.

I think that has to do mostly with documentation. Kemeny and Kurtz’s story is well documented. Many of us were around when BASIC took off on PCs. But BASIC on minicomputers is sort of part of the misty old time computer scene.

The oldest minicomputer that I programmed for was an HP Series 1 RTE-A and we used FORTRAN. I wasn’t even aware if there was a BASIC compiler for it. Even at the Vintage Computing Festival, looking at the old minis that they had, BASIC wasn’t part of their displays.

I’m going to throw in another shelfie - my shelves are rather disorganised so it’s not very thematically consistent but at least it’s quite diverse: