BYTE magazine old issues are always fascinating and bring out pretty cool surprises.
Issue #10, vol. 10 (October 1985 - Byte Magazine Volume 10 Number 10 - Simulating Society : Free Download, Borrow, and Streaming : Internet Archive) has a little advertisement in the bottom corner of page 18 that thrilled me.
I purchased this magazine back then (I was young…) but never fully realized this is a S-100 board featuring hi-res graphics (1024x1024…) that was supposed to work (somehow) with AutoCAD on on MS-DOS PCs.
Maker was Illuminated Technologies (OK): does anyone has more info on this board and - mostly - how was it supposed to work “in conjuction with AutoCAD” as per the ad text? 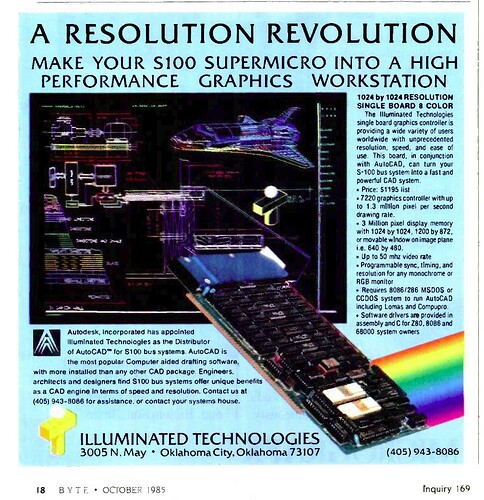 Indeed S-100 bus featured x86 CPU boards, but this one talks about “software drivers provided in assembly and C for Z80, 8086 and 68000 system owners”.
I wonder how did thing worked

Here’s a little info on hardware of the time, but doesn’t help at all with the question of drivers:

A few of the later S-100 board manufactures had their own 68000 CPU card. Amongst the best well known were the ones by CompuPro and Dual Systems. Peak Electronics had an 8 bit 68008 CPU board and Cromemco even went as far as a 68020 board.

As I understand the text of the ad, the card is actually a stand-alone feature. MSDOS or CCDOS on 8086 or 80286 is apparently required to run AutoCAD, but not to access the graphics card per se. For this, in order to access the card from other programs, there are the drivers, so that you can access the card directly from your Z80, 8086, or 68000 CPU systems (using any program that links the driver code or has it directly included in a C source).

In the old days stuff like autocad had a driver interface of its own for graphics devices. You got a DOS driver for autocad with your fancy graphics card. VBE didn’t have any support for acceleration until VBE/AF and that was quite late.

So for autocad at least you’d build the autocad driver (if a binary wasn’t provided), add it to your autocad set up and you’d get the graphcis on a second monitor.

Some big names started out in the S100 space - notably Matrox.