Restoring UNIX v0 on a PDP-7: A look behind the scenes

Very nice. Unix running on a restored PDP-7. Here’s a video of it in action.

[Ayse H.] I recently sat down with Fred Yearian, a former Boeing engineer, and Jeff Kaylin, an engineer at Living Computers, to talk about their restoration work on Yerian’s PDP-7 at Living Computers: Museum + Labs. The PDP-7 (short for ‘Programmed Data Processor’) was introduced by The Digital Equipment Corporation (DEC) in 1964.
[…]
On November 7th, 2018, after over a year of correspondence following Yearian’s initial visit, a handful of Living Computers engineers including Jeff Kaylin, Cynde Moya, and Stephen Jones arrived at Yearian’s house to extract the PDP-7 from his work room and load it onto a truck bound for the museum.

From there, the team began working to load the UNIX Version 0 operating system onto the machine. This goal was an homage to the fact that Ken Thompson wrote UNIX Version 0 on an old PDP-7 at Bell Labs in 1969. UNIX also turned 50 this year, which made the restoration project all the more timely.
[…]
After countless hours of work, the team booted UNIX v0 on Yearian’s PDP-7 on Monday October 28th, 2019 for the first time. The engineers logged in as user ‘dmr’ as a tribute to Dennis M. Ritchie, who created UNIX with Ken Thompson in 1969.

Marvellous! I noted the appearance of hello world written in B - or is it BCPL??
@ CAT HELLO.B 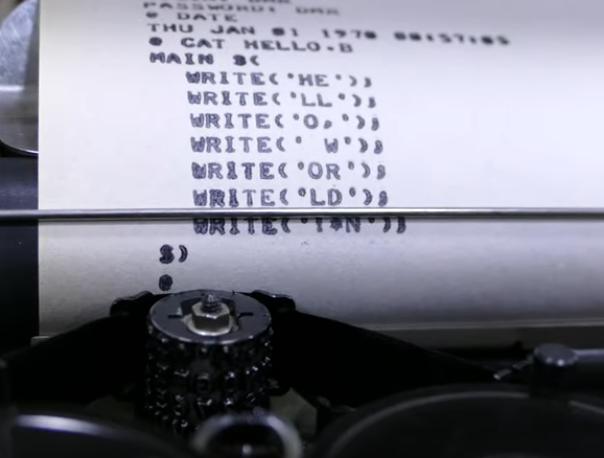 First bringup is in this video, including the all-important toggling in of a bootstrap: