Sometimes, an architecture is built to execute a particular programming paradigm - in this case, Object-Orientated programming. And the audiophile connection is that the work was done by a division of the Hi-Fi manufacturer Linn, to serve the business’ own needs.

The Rekursiv system was designed to provide an efficient (fast) implementation of the Lingo language and to provide support for other languages by allowing their high-level programming constructs to be microcoded into single instructions. For example, the CONS of the Lisp has been microcoded and benchmarked against other hardware platforms.

Also from there, this article in BYTE (issue also covers parallel computing, and the NeXT.)

How Linn came to design a new microprocessor is an
interesting story in itself…
…
In 1981, programmers and a compiler writer were hired, a Glasgow computer science lecturer was taken on as a consultant, and a language system called LINGO, with many of the features of Smalltalk, was written. However, the performance of LINGO on the VAX proved to be far from adequate for the task of automating a whole factory.
…
In 1984, Linn Smart Computing Ltd. was set up and Dr. David Harland joined as technical director, a job he combines with being visiting professor of computer architectures at the University of Strathclyde. He and his team have designed a chip set with which to implement a persistent-store, object-oriented processor.

A bit about the implementation:

The Rekursiv achieves high performance by having multiple internal memory buses so that many operations can occur in parallel, instead of a highly optimized serial instruction pipeline like a RISC, Built from three custom gate arrays and several megabytes of fast static RAM, the Rekursiv is a single-board rather than a single-chip microprocessor.
This SRAM holds the microcode and the pager tables used to
keep track of objects; it exists inside the processor like a conventional processor’s register set. The SRAM is organized into six different functional memory spaces, each with its own data and address buses, a side effect being that the gate arrays require the largest packages ever: 299 pins to handle all the lines.
Since there is also a dynamic RAM (DRAM) interface for the main object store memory, the Rekursiv could be labeled a seven-memory architecture. 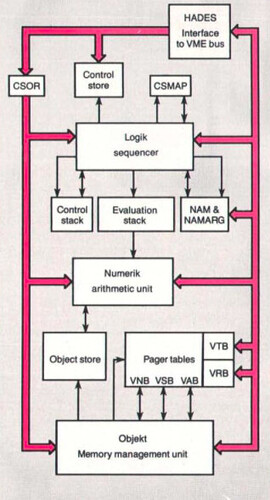 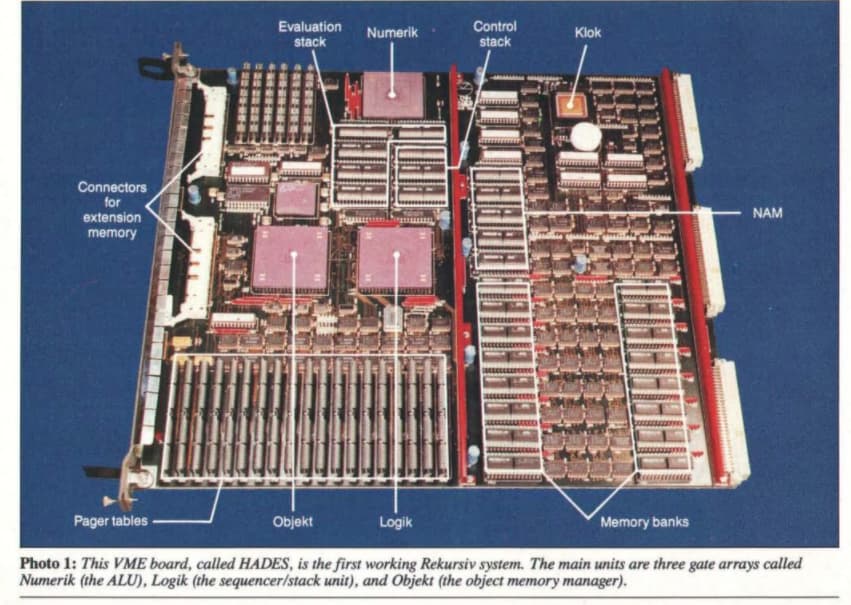 You must have the ONLY copy of the book, I can’t find it else where.

I suspect while RAW speed for other systems doomed this architecture,
nobody looks at what was being done as system rather that individual instructions.
How fast is processing a list in software compared to hardware assuming same random
acess ram speeds. Ben.
Real Audiofile’s use VALVES for audio, and transistors for computers.

PS: Electrostatic speakers are quite nice too.

Online copy of slides from lecture

Nice finds! A copy or two also held at the British Library - almost any book is free to read there, and you can even take photos if you use a handheld camera or phone, but only for your own use.

From those lecture notes:

This lecture will concentrate on the: practicalities of configuring the REKURSIV to a variety of different application domains and will discuss topics such as

Various examples will be given.

Demonstrations :
A simulator for the microcoded architecture 10 run on a Sun using X-windows will be available, as will a REKURSIV accelerator board for a Sun.