I thought someone might be interested in a recent project I’ve been putting together.
It’s a transputer emulator running on a Pico that has transputer links made using the PIO feature. The links run standard 10mbps traffic and can attach to a real IMSC011 link adapter (and eventually to a PC over USB). 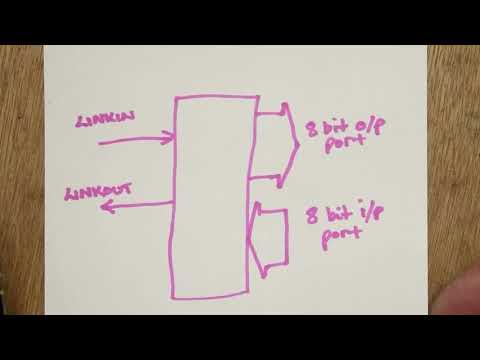 Wow! Extremely interested - an excellent project. And I see you have a handful of RP2040s too - at less than £1 each, that should make for an impressive hypercube!

I will now be working my way through your six videos so far.

Very much hope you will be sharing your source, too!

(And, welcome! Please feel free to Introduce yourself)

Glad you like it. Yes, I have quite a few RP2040s, and Picos. I’m probably going to switch over to using them instead of the STM32F103 blue pills and ICs I have use din the past. Partly because of the supply problems and partly because the RP2040 is so much more capable. And they are cheap, the ICs probably less than an equivalent STM32, and the Pico around the same as a blue pill.

I was thinking about a multiple Pico computer this morning. There’s quite a lot of extra components needed for an RP2040, not least of which is external flash, so I am wondering about just stacking Picos. They are castellated so wouldn’t necessarily need aPCB, just run wires down the sides of the boards. I’m not sure using the ICs would be much smaller or cheaper once the extra componentry is added.

I’ll be setting the github to public, yes. The code is a bit untidy at the moment so I’ll tidy up and open it up. If anyone’s desperate I could put that towards the top of my list. If no-one asks for a project then I leave the github stuff until I have spare time.

A tower of picos connected by stiff wire would be quite the thing. Remember to leave an air gap. In fact a toast rack of picos might be a better idea.

Great to hear you’ll share your code! Ideally you won’t apply too high a standard of tidying up - it can happen that projects are never published because they are never quite ‘ready’. I’m particularly interested in which transputer emulators you’ve found, and how much change is needed to embed them into a pico.

And of course your implementation of links on the PIOs, that’s going to be interesting.

I do like the pre-boot protocol of the transputer - and I also like the worm which can explore and then describe your network. I’d rather like to have a play - and I even have most of the kit - but haven’t quite scraped up the energy.

Hmm, yes, sorry, should have tried harder to find a better way to put that… I’ve certainly published some ropey code in my time. Mostly my failure mode is not to get started.

There is probably a few of us in the same boat.

Code is now on my github repo here:

It is very much work in progress and very messy. To run this code and do anything you will also need to build the IMSC011 hardware. I’ve had a thought about running the Pico direct to the PC server, then you don’t need the IMSC011 and the only hardware necessary is a Pico. I’ll look in to that. Of course you can’t talk to real transputers that way. You could still use the PIO code to run real transputer links to other Picos though…