The 200 and 400 use an early version of the SIBO system (it lacks some features of Series 3 operating system) and the MC600 uses the MS-DOS (3.3). They are actual laptops with full-size full-travel keyboard keys (the layout is a bit compromised, of course) and with 640x200 (640x400) passive black-white LCD screen (the MC200 has smaller display). I never measured it but think it’s about 9".

I personally use the MC600 for writing PSION Organiser II software in OPL (there is an IDE with emulator for MS-DOS!), to sync data with the Organiser II and for other tasks (reading ot TXT files, writing, some light computing and so on).

These machines can run on 8xAA batteries and are perfectly happy with modern rechargeables. Can survive months ins sleep and 40+ hours of active work. They have no HDD - they use PSION SSD disks (up to 4) instead. So the same media as Series 3 use. There are same limitations of SSD size - flash-based msut be Type I and no larger than 1MB, RAM-based can be of any size (though finding a 2MB third-party RAM SDD is quite hard - I have only one). The device has usually 1 serial (mac-type connector) and 1 parallel port. These port are in an removable module and (in theory) one can se 2 of those modules.

The MC600 can communicate with the Atari Portfolio on the parallel port, by the way.

I can say less about the SIBO-based MC400. If is even nicer (GUI interface similar to later Series 3 interface, large touchpad etc). Some Series 3 applications have version compatible with the MC (for example the dictionary) but software for this device is not common. There is a text editor, an OPL interpreter, a serial communication program and not much more (an alarm clock, a calendar and a calculator). The word processor (RTF-capable) and a spreadsheet (can do Lotus123 files) were sold separely. They are quite basic (no graphs in spreadsheed, for example) but easy to use. An then there is not much more. The OPL interpreter cannot use any GUI or graphical elements (one cannot draw even simple line).

Interesting - I’m not sure these slightly later Psions even came up on my radar, which is a bit surprising. (So, as you might guess, I’ve never used one.)

Pages for logged out editors learn more The Psion MC (Mobile Computer) series is a line of laptop computers made by Psion PLC and launched in 1989. Developed by Psion towards the end of the 1980s, informed by market research about the mobile computing needs of potential customers in the 1990s, the MC 400 was introduced in late 1989: an approximately A4-sized laptop or notebook computer featuring a full-size keyboard, 600 x 400 pixel monochrome liquid-crystal display and a multitaski... 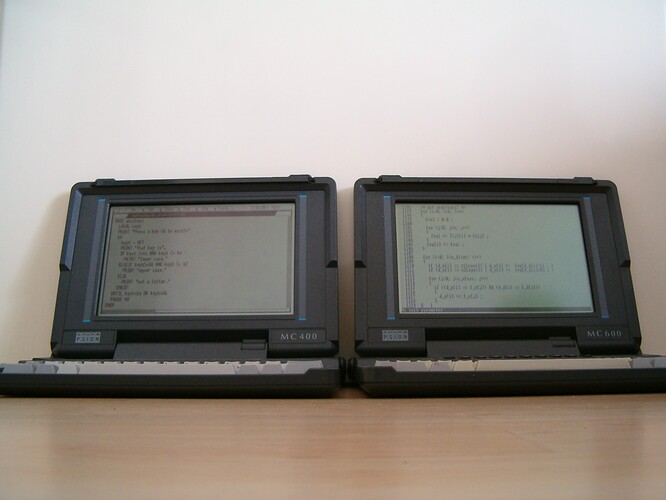 (For earlier psions, see this earlier thread: The Psion HC - in between the 1 and the 3 (?) and maybe MalayBook: Special version of the Psion netBook produced for schools in Malaysia)

These two are mine!

That’s marvellous! From what you say, I think the MC400 is my instant favourite - nice screen compared to the 200, and still pre-DOS unlike the 600. How do the keyboards compare to the Series 3?

They are much like average PC keyboards of their days (~1988). Thus much better than Series 3 tiny keyboards.

If I remember correctly the early Apple PowerBooks (which are of similar size) had much worse keyboards.

I briefly owned an MC400 in the 1990s and I’ve regretted selling it ever since. After a loft/attic clearout in 2020 I rediscovered some of my old Psion collection I started looking on eBay for MC400s… now I have 3!

I’ve hooked one of them up to “the internet” via a Raspberry Pi (what else?

One of the 3 is in really poor state of repair as is has some serious leaked NiCd damage to the main PCB… this has to be the best candidate for a Pi-transplant, or possibly just donate the keyboard (with matrix/USB adapter of course) for some good old mechanical keyboard vibes

The latest one I found on eBay is very interesting - basically a stripped down “MC WORD” version with OEM OPL to create a remote text processing and transmission terminal for journalists to submit stories back to a central news desk. Created as a direct competitor/replacement for the Tandy TRS-80 200 - link

I wondered if the MC400 was available from an online retailer I am aware of. Sure enough, it is:

Psion MC600 laptop The year of the Lord is 1989, Psion released a multitasking sub-notebook with grafical user interface System is based on MSDOS More

If you have to ask the price then maybe you can’t afford it.

I still enjoying using it. But it is the DOS model (without the GUI).

For that reason I’d love to see an MC400 emulator

The user interface is clean and simple and I would love to see it preserved for posterity in some sort of emulation environment.

I’ve imaged the ROM of one of my dead machines…

Edit: Ah, I see you’ve already started! I didn’t see initially that the post below is yours…

I found an interesting recent post about an adventure which may yet bear fruit:

I read an online post about creating an “MC400 emulator”. That got me thinking about the ROM, and the 28F010 flash chips that realise it…

Yeah, that’s me - I’ve started but my skills run out at:

I’ve imaged the ROM of one of my dead machines…

I have the ROM image, I have the HDK/SDK from Alex Brown’s Psion Documentation Project (via his Hackaday page “The Last Psion”) and that’s about it :-d

And by the way, these machine do not use the 8088 as the title suggests. In common with the Series 3/3a, HC & Workabout ranges they utilise the 80C86. 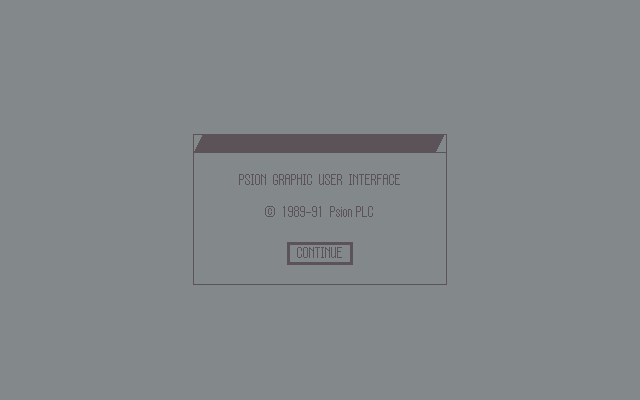 I’m contemplating whether it’s worth trying twitter/LinkedIn/Facebook groups to see if any ex-Psion/Symbian engineers can help. But it’s ~30 years ago this stuff was current

Perhaps slightly OT, but as I’d somehow missed that the MC line was a precursor to the whole palmtop adventure, as penance I offer this history:
3-Lib History of Psion

I remember picking up a glossy promotional brochure for the MC line - it was A4 sized and when you opened it up it looked just like the MC400, full-page pictures of the screen on the left page/keyboard on the right. This must have been 1989/1990 ish. I was instantly hooked

At that time having a truly portable computer this size blew me away! I’d used “luggable” PCs at work (something like this luggable Compaq 386 ) and knew smaller was better

My Teensy LC code is here 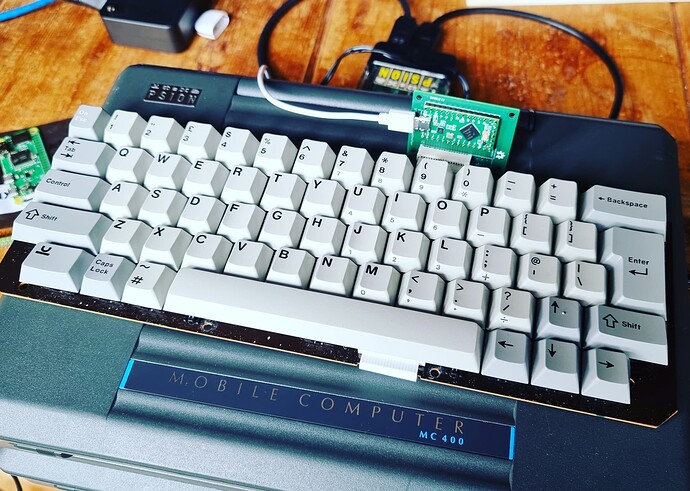 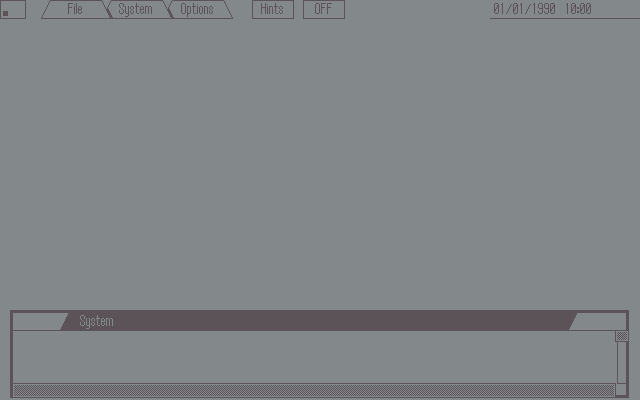 2 of them have serious “screen rot” (or LCD “cancer” or “bleed” depending on who you ask!) - looks like mechanical failure of the frontmost layer (polariser?) 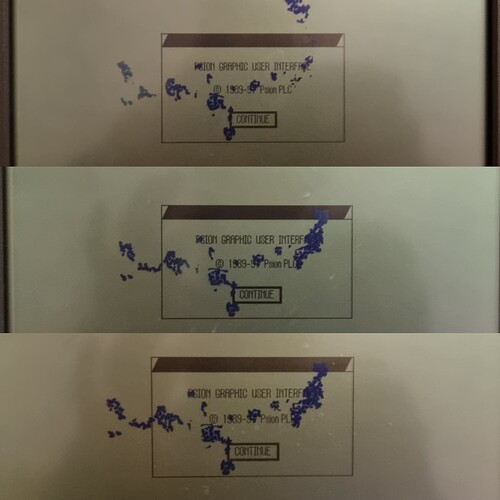 1 has a screen that is completely off/dead - I haven’t looked but surely that’s just a cable/connector fault.

1 of the machine’s keyboards had been battered, it looks concave in the middle and another machine has a really quiet speaker.

Surely I can piece together 1 good machine from the 4… but I need t set aside a couple of days maybe to do it properly.

For central creeping blackness, one suggested solution is warmth - face down in sunlight, on a radiator, or in an oven on a very low heat - see the final two minutes of this video: 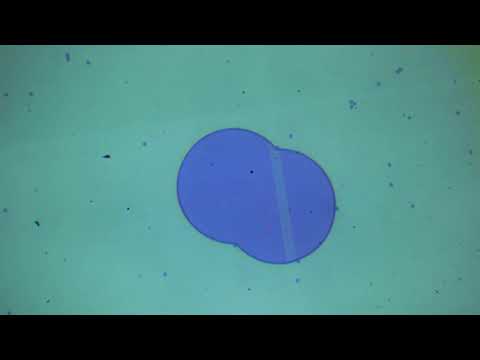 the success recipe seems to be 90min @ 85C, where small temperature changes made a huge difference

Dead rows or columns are of course something else - perhaps a failed flexible connector?

And any creeping blackness from the edges of an LCD could be a leak or a seal failure.