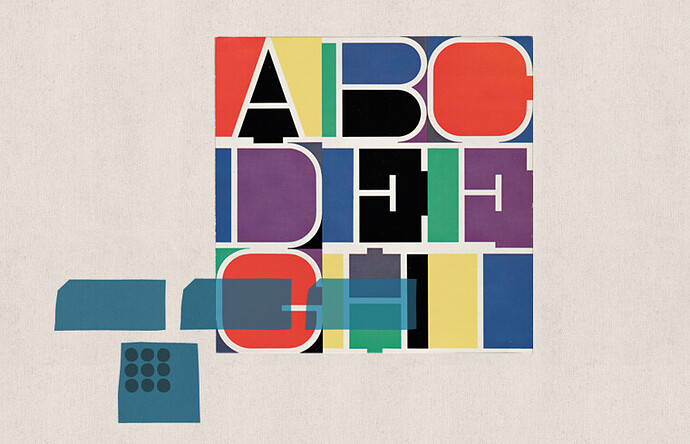 Time for a summer romance.

Oh yikes - glad to say I’ve read this one before, and feel no great need to read it this way! It does perhaps concentrate the mind on the text as written. I think we should call this art, and feel free to spend as long (or as little) contemplating it as we like… Bravo.

Yes, it’s certainly slightly off-topic and a bit artsy, as well. However, so many punch cards can’t be wrong!

Are there any stories about reading lengthy texts and/or sources directly from punch cards, e.g., because no printer had been available?

For the more practical side, are there any metrics for a stack of 10,700 cards in terms of weight and height? The only thing I found was this table for calculating card stock by IBM http://ibm-1401.info/CrownPaperIBM/TabCardStockManSpec.pdf

(A Quora answer works out 12.5 billion cards to hold a terrabyte, which translates to “1,205,467 cubic feet of space and weigh 34,097.5 tons” – no idea, how accurate this is. But I’m rather sure there would have been some formula ready to estimate storage requirements of data on card stock, back in the day.)

A stack of this size would take an IBM 802 about 10 3/4 minutes to sort it (this was rather fast at 1000 cards/minute), but it would take an IBM 548 Alphabetic Interpreter about a week to label the cards. (This one labels two rows of 60 columns for 60 cards a minute, so it’s a bit unclear how it would perform, if it could actually work on 80 columns. You probably wanted to print the labels directly on the card punch.)

A bit of calculation could tell us what we need to know, then!

Here’s a photo of 62,500 punched cards, being the SAGE software, 5MByte apparently: 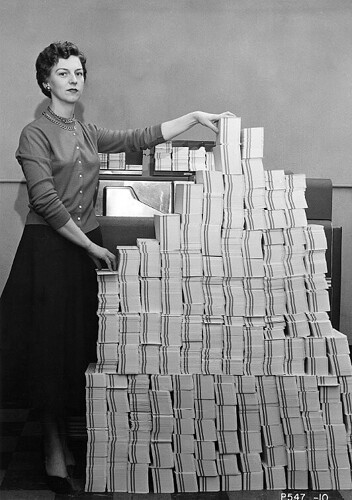 are there any metrics for a stack of 10,700 cards in terms of weight and height?

While messing about with my own card project, I came up with this, based on the IBM stock calculator, some old shipping weight invoices for card boxes, and physically scaling from stock photos of cards on palettes, plus a whole bunch of hand-waving:

So your “novel application” would be a stack of six boxes totalling 370 × 200 × 570 mm and weighing about 29 kg. The top one wouldn’t be completely full. I didn’t count the loss of mass from the chad, but you can — each hole loses a mass of 0.000715 g, working from 161.1 gsm (“99 pound basis weight”, a maddening unit) and my always-to-hand copy of Federal Information Processing Standards Publication 13: rectangular holes in twelve-row punched cards.

A friend has recently confided that he has 2–3 unopened boxes of punched cards, but I suspect he won’t let me near them as I might steal them. But it would be theft for science …

… I didn’t count the loss of mass from the chad, but you can — each hole loses a mass of 0.000715 g, working from 161.1 gsm (“99 pound basis weight”, a maddening unit) and my always-to-hand copy of Federal Information Processing Standards Publication 13: rectangular holes in twelve-row punched cards.

This reminded me of this story told by Butler Lampson, recipient of the Turing Award for his contributions to computer science:

There’s a story about some people who were writing the software for an early avionics computer. One day they get a visit from the weight control officer, who is responsible for the total weight of the plane.

“How much does it weigh?”

“It doesn’t weigh anything.”

“No, it really doesn’t weigh anything.”

After half an hour of back and forth he gives it up. But two days later he comes back and says, “I’ve got you guys pinned to the wall. I came in last night, and the janitor showed me where you keep your software.”

He opens a closet door, and there are boxes and boxes of punch cards.

“You can’t tell me those don’t weigh anything!”

After a short pause, they explain to him, very gently, that the software is in the holes.

they explain to him, very gently, that the software is in the holes.

So it has negative weight? What does the software revolution mean for planetary revolution (and, esp the Moon?) Is there danger?

On the more serious side, if we ignore the border of a card for a moment, a possible punch position occupies a about a fourth of that particular card area. Provided that we use this to encode text, there are zone punches, meaning there are about two punches per code in average. Meaning, the chad is about 2/48 of the punchable area, or a bit more than 4%. Adding the vertical edge area to this, it’s 2/52 or a bit less than 4%. The horizontal edges of a card are about 4 columns worth of material, so let’s subtract 4/84 from this, which gives about 3.75% of the total weight being chad. For 29 kg, this is about 1 kg (even a bit more) – which is not insignificant.

Jane Austen is wanted for 1 kg of worthy card stock!
(What’s now about “no material damage was done”, the ending of about every Austen novel?)

I can remember that around 1980 we drove to a customer with our latest product, about 12,000 lines PL/I, in the form of punched cards in the trunk. The stern was almost hanging on the road.

The Digital Library recently saw some updates to its catalog.

A noteworthy addition is Wittgenstein’s tractatus logico-philosophicus (AKA “TLP”), as the TLP and sequence numbers are a match made in heaven – or maybe in hell –, at least, not at ground level. The diagrams are a bit difficult, though. 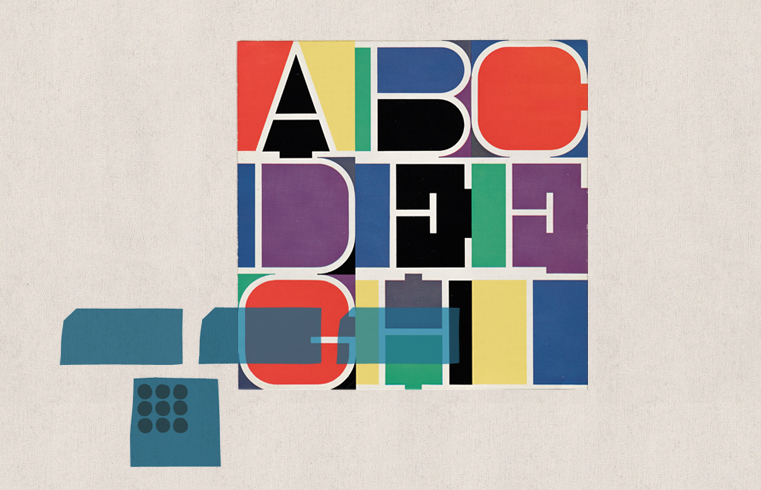 A brave endeavour. Goedel would be a good one to number!

I think War of the Worlds, being short, might be my favourite here. TLP is shorter, but somehow less digestible.

As for my own rationale behind this:

I have to admit, I’ve a bit of a history of mangling the TLP. Back in the late 1980s, I invented – together with a friend – a little game involving the TLP and a set of dominoes, which eventually became distributed by Allan Janik (author of “Wittgenstein’s Vienna”) to a few luminaries in the LW-community. (There’s a scene in Derek Jarman’s “Wittgenstein” with a set of dominoes on a night stand and LW. mumbling, “I would have liked that.”)
Anyways, because of this, as a project, TLP is probably my favorite, together with Pride & Prejudice (everything is in flux by nothing/nobody moving at all, there is actually no arc to any character, but the boring clergyman-cousin – and I love the idea of confronting the alleged girl’s book, which is in actuality a great and analytical social commedy, with this mechanical setting).

Northanger Abbey is a book, which is mostly about media and the social economy thereof (and men’s love for boring moral and fast wheeled vehicles) and about turning the Gothic novel, as by Ann Radcliffe, from its head to its materialist feet, — and for this probably a must, as well.
(In Radcliffe’s book, there are page-long introductions of the various characters, followed by a description how they were allowed by a graceful luck to follow their traits, while in Austen’s book an introduction is a matter of a single sentence, maybe one-and-a-half: we get the social-economic position and standing in life, and, whether there is a noteworthy deviation from the expected or not. Quite a remarkable turn! And where in Radcliffe’s writing characters demonstrate their humanity by breaking into tears about every two pages, which may be a bit exhausting, but still a trope in Stoker’s Dracula, in Austen’s book, everybody is just doing her best to be excited by turning life into a mediamatic event.)

The Dalkey Archive is just a long term personal favorite (and available, because its in the public domain in Canada), sadly, no Third Policeman, though. (Also, never forget the Dalkey atmospheric railway, the first contraption to accelerate a human being to 100 mph or more, even, while just by accident!)

The rest is admittedly a bit of a filler to make it a “library”.
(And this library is, of course, about the impossibility of reading these books in that format and what we might expect to find in a given format. In a sense, the novel is an apparition of technical media and its reproducabilty, and transforming this into a format, where human readability is only second rank, where, by becoming data, it somewhat still exists without the reader, as part of the technical contraption, but then also not existing at all, where there is no human reader, but just a technical one, provides some kind of closure to this, at least for me.)

*) There’s also some inner relation between Austen’s work and early Wittgenstein. A typical Austen ending is, “and no material damage was done.” But there is also Mansfield Park, which is about the most evil book ever. While reading, we may question Austen’s sanity and, if she had become a moralist (in terms of the moral histories, she attacked so fiercily before) in her old days. But then, after +800 pages, there’s this this ending, where no material gain was made. At this moment we must appreciate that our heroine never actually acted at all, she just remained in utter passivity, afraid to ever act, misguided all the way along, which eventually earns her the favorable position with the (alleged) slaveholder father. And there’s nothing which this position of comfort does to her, nothing is changed at all. In a way, it’s a book to be thrown away, at the moment we understand it, just like the TLP. (There should be a law against all those movies of “how our witted little girl takes over this boring aristocrat family”.)