Not the first time miniature models of mainframes have been featured here. But these come with extras.

With how important desktop and laptop computers are to the world today, it’s hard to imagine that, not too long ago, they used to be the size of

Temese, who lives in Montreal, Quebec, has always been fascinated by the designs and aesthetics of the first generation of computers, especially those made by tech pioneer IBM. Although he has prior experience with miniature modeling, Temese said his tiny versions of the IBM 1401 (1:15 scale) and IBM 704 (1:16 scale) took hundreds of hours over several months. The miniatures are approximately 4 inches tall, but he strove to maintain every minute detail of IBM’s groundbreaking machines, 3D printing them in resin or etching them in copper for greater accuracy. The 1401 model also contains some extra non-polystyrene elements to make it feel more alive; a custom ATmega board spins the tape drives with tiny motors and controls small LEDs inside the control panels, animated pseudo-randomly to increase that sense of realism. “It’s not just about making a replica,” he admitted. “It’s about capturing the essence of the computer and the people who built, designed, and engineered these machines.”

Forget the tiny leds, I want to see a real 704 hiding in there. Wi-Fi to connect the boxes.
Ben.

Great!
Especially the HP 264x including real OLED display.
Most difficult maybe fixing the keys.
The mainframes are also great. Who has the place and money for a real system? 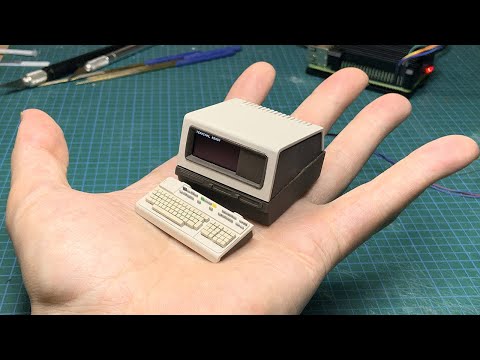