Last year i has to move in an tiny Office, because of building works and had to dispose of a few historic folders. In one of them i found a Btx (“Bildschirmtext”, a proprietary network, based on telephone and TV, of the former german mail and telecommunication authorithy, abandoned in 2001) printout from the 1990s with the contact number of the Microsoft hotline in Munich. There was a direct call number for each product team! Routinely i asked Dr. Google, in order to confirm the periode i remembered, and was astonished that, according to the date of the last change, Microsoft’s support had as late as in 2017 to deal with “difficulties with accessing BTX”. 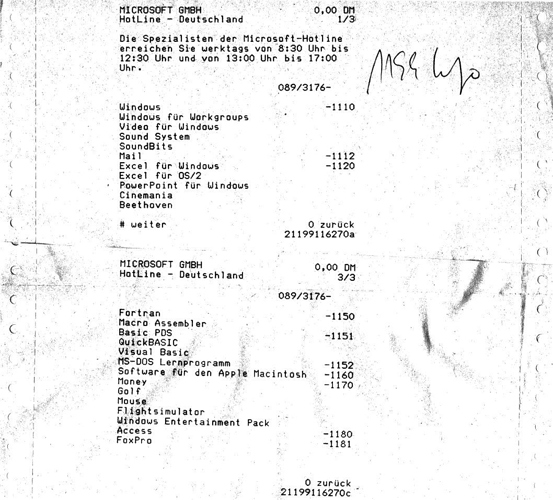 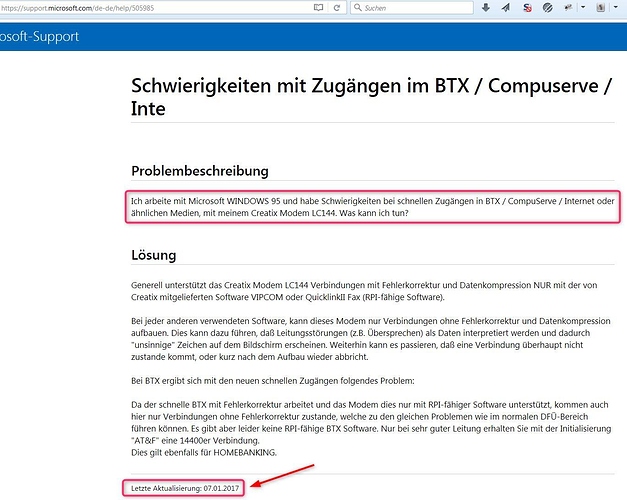 And what the hell is a flot line medium?

Ah, interesting, there seems to be some technical relationship, between Prestel and BTX… but I didn’t find anything indicating that Microsoft ever offered support on Prestel. I wonder if they did. As your document suggests, Compuserve, Internet, and dialup were all supported.

Bildschirmtext (German "screen text", abbrev. Btx or BTX) was an online videotex system launched in West Germany in 1983 by the Deutsche Bundespost, the (West) German postal service. Btx originally required special hardware (it was based on GEC 4000 series computers) which had to be bought or rented from the British General Post Office. The data was transmitted through the telephone network using V.23 modems and the content was displayed on a television set. Originally conceived to follow the UK...

Originally conceived to follow the UK Prestel specifications, and developed on contract by a small UK company called Systems Designers Ltd for IBM Germany. Btx added a number of additional features before launch, including some inspired by the French Minitel service, to create a new display standard of its own. A trial system was installed in Düsseldorf and Berlin in 1980

Videotex (or "interactive videotex") was one of the earliest implementations of an end-user information system. From the late 1970s to early 2010s, it was used to deliver information (usually pages of text) to a user in computer-like format, typically to be displayed on a television or a dumb terminal. In a strict definition, videotex is any system that provides interactive content and displays it on a video monitor such as a television, typically using modems to send data in both directions. A ...

By 1981 Prestel International was available in nine countries, and a number of countries, including Sweden, The Netherlands, Finland and West Germany were developing their own national systems closely based on Prestel.

As I remember it (from reading pre-launch reporting in magazines), BTX was meant to build on Prestel, Videotext and Minitel, both as a consumer service and a market place. Kind of “Minitel done right”, as you would expect from the German government. Lots of research and studies went into this, but it failed to live up to expectations in a rather spectacular manner. (The disappointment was that extensive that German speaking academics were actually a bit late to the WWW ten years later. I vividly remember propositions, like, “We were that wrong with the BTX studies, we won’t expose ourselves on this WWW again.”)

BTW, the videotext service of the Austrian national broadcasting service is still up and running and also available via WWW: https://text.orf.at/ (however, no Microsoft support numbers).