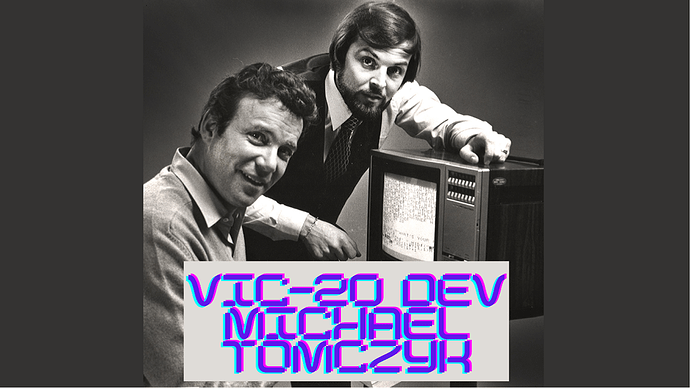 Tales From The Collection is the #1 resource for all things related to fan mail, through the mail (TTM) autograph collecting and celebrity news.

[Tim Santens] Michael Tomczyk is a futurist, technology pioneer and a leading authority on best practices and strategies for developing/launching radical/disruptive innovations. He is a popular author, speaker, and consultant to corporations and government agencies. However, he is perhaps best known for his early work at Commodore for his role in guiding the development and launch of the first microcomputer to sell one million units. He did this as the Product Manager of the VIC-20, the predecessor to the better known Commodore 64. He authored the 1984 book The Home Computer Wars which compiled his own recollections and impressions of his time working at Commodore.

Michael is also an authority on nanotechnology. He is the author of the 2016 book, NanoInnovation: What Every Manager Needs to Know and during that same year served on the NNI Review Committee (National Academy of Sciences) which reviewed the billion-dollar US National Nanotechnology Initiative, to recommend changes and improvements to this initiative. He has also written book chapters and articles on the future of biosciences, gene therapy, and medical innovations.

I had the opportunity to ask Mr. Tomczyk some questions over email regarding his career, to include some about the development of the VIC-20, his friendship with Apple founders Steve Jobs and Steve Wozniak, and what he’s been up to in the decades since the VIC-20’s launch.

A lot of interesting ideas, in particular the concept of “full-spectrum product line”, which should be, in restrospect, a stupid idea. After all, the PC compatible utterly destroyed IBM’s previous model of lots of different incompatible computer systems. IBM had the fullest spectrum of products imaginable, and it was … a bad idea that consumers ultimately rejected.

As it was, the Commodore 64 crowded out all the other potential members of this “full spectrum”. The only other member there was room for was the C128, thanks to backwards compatibility. The C64 wasn’t so much more expensive than a budget computer, but far more useful. The supposedly more powerful computers were less useful due to limited software.

Now, it is still true that Commodore’s leadership made terrible mistakes that crippled the company. But their biggest mistake was actually sticking with the stupid full spectrum concept - the stupid combination of the backwards compatible C128 and the completely incompatible Amiga. There was no sensible upgrade path from C64 to Amiga. You couldn’t reuse your (expensive) floppy drives or printer or software or anything. There was no reason to upgrade to Amiga vs a PC or Atari ST or whatever.

They could have done so much better by going all in on the C128. It could have easily had a CPU twice as fast, making it competitive with the Mac or Atari Amiga in terms of speed and power (it would have been faster than the historical Apple IIGS, which itself was more powerful than the Mac despite being purposefully maliciously crippled by Jobs into a slower CPU). Ditching the middling 80 column chip in favor of a frame buffer would have given it next-generation graphics without much development effort.

But instead, they couldn’t resist the satisfaction factor of stealing Amiga out from under Jack.

I think, the closest to what you are suggesting might have been the C65.
However, I think, you’re bit harsh on the Amiga. This conception is mostly due to unimaginative marketing. (“What may sell, but another C64?”) It could have been a great office computer, it could have been a great professional computer (what became Mac territory), it could have been so many things that the C64 never could have aspired to. I think, it may be best perceived as a fresh start, addressing new audiences – which wasn’t marketed as such. (Now, we may ask, if there was a suitable niche for this at that time – probably it was already a tick late –, but this is yet another question.)

On the other hand, regarding the “crippling” of the Apple IIGS, I’m not so sure, if this was for Mac rivalry or for separation of market segments, and also for components and Apple ][ compatibility. So it may have been much for the same reasons, you addressed for the Amiga.
(Mind that this segment never was about “what can we reasonably do?”, but much about “what can we do at the bottom range of production costs?”. Which also means that you have to focus your design and can’t have it all. A “what we can resonably do with some compromise” computer was probably more like the LISA, but, then, you’re also facing a similar price range. It’s much about finding your niche in the Sinclair-LISA abyss.

Well I kind of think marketing was SELL THE PC for everything but games.
Look at all the Dos want to be computers, like the AMIGA and a 286 bridge card.
No wait, games too for the PC , look at MS flight simulator 1.
That just left Japan for the better quality games sadly, from a Canadian viewpoint.