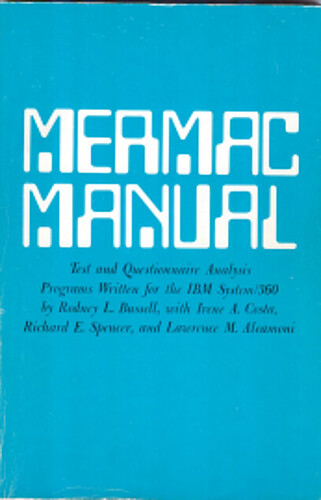 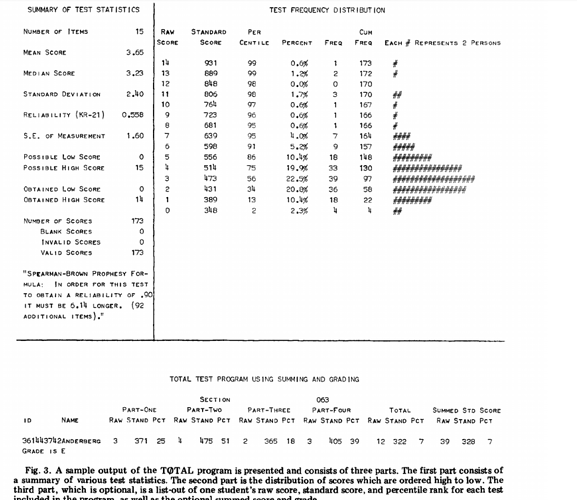 Another one from my collection. This time about real computing.

Test and Questionnaire Analysis for IBM 360. 163 pages, hardcover.
Software written at University of Illinois. Aimed (mainly) at students there, who obviously should buy it. Price printed on back cover: $4.95
And the software is also about school tests.

The package consist of 13 programs: ITEM, QUEST, SCORE, SELECT, TOTAL, ERROR and 7 tools for rearranging data.
The data of the questionnaires first had to be transferred to punched cards, tapes or disks (JCL).
The main program TOTAL used the 1910 Spearman-Brown prediction and Kuder-Richardson KR-21 formulas and printing out some nice graphs. You can get the mean score, median score,standard deviation, standard error of measurement, etc.

There are some samples of job decks and many printouts but no source codes of the program itself. And I don’t think that the software is still available. But someone probably can program this himself. Nowadays they would let students programming this and not just learn how to use or interpret a program. I wonder how many books they sold. Mine was from a library and nobody even borrowed it. The software is only useful for very large schools/amount of same tests. Quite interesting, but I wouldn’t recommend this.

Does anybody know similar (mainframe) books?
Are there any other questionnaire/analysis programs (for mainframes or home computers)?

The only IBM 360 text book I still have in hand is Walter G. Rudd’s “Assembly Language Exercises”, a 202-page soft-cover accessory to his much larger hard-cover " Assembly Language Programming and the I.B.M. 360 and 370 Computers", which I must have lost or sold back to the campus bookstore several decades ago.