In the thread RC2014. A retro Cray? we see a distorted Mandelbrot: 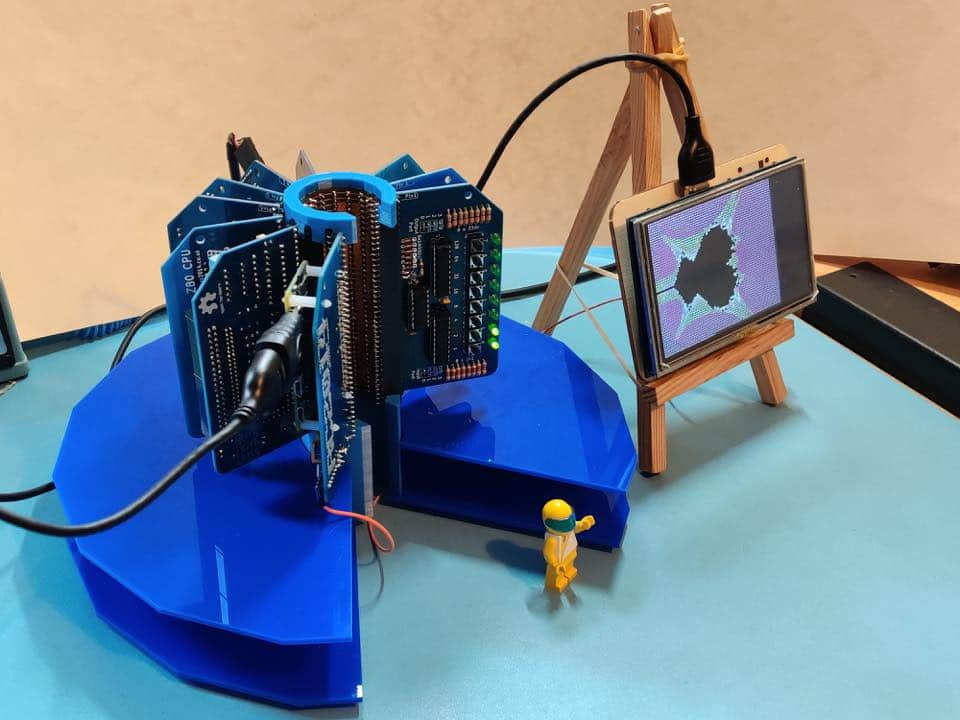 I wish I could replicate an error that I made around age 16 when coding Mandelbrot: I made some error in expanding the formula, and the resulting fractal was wild: no more symmetric at all, but whirling spiky knots. Probably somewhat more like Julia sets. Lost the code years ago, sadly.

We can has mandelbrot mishaps thread plz?

I once had a mishap in my fixedpoint maths and that fed a strange “noise” into the calculation. 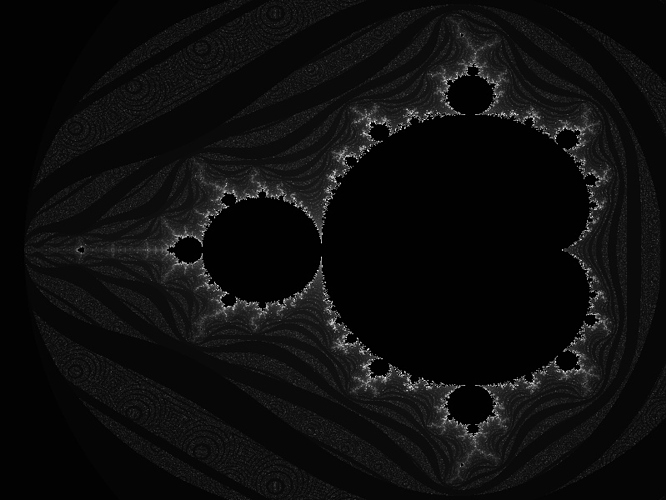 [email protected]: The output of the corrected program. 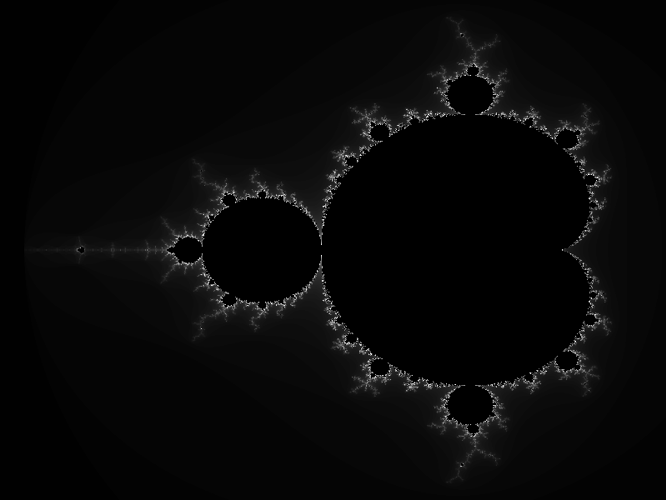 We can has mandelbrot mishaps thread plz?

As if by magic, we’ve transported to just such a thing. When @hoglet and I were working on his fork of DSPFract, which uses a Beeb-attached FPGA board to implement a Mandelmachine, we had some difficulty fine-tuning the hardware-optimised multiplications. We ended up with some empirical settings which I never quite got to grips with on a theoretical level. (It turns out that complex multiplication needs fewer multiplies than you’d think, and that squaring can be cheaper than general multiplication, and that you can make a 35 bit engine using slightly fewer 18x18 hardware multipliers if you synthesise some assistance logic. But there were some artefacts at extreme zoom which didn’t look right.)

But there were some artefacts at extreme zoom which didn’t look right.

I once thought I had introduced some artefacts at extreme zoom level, but it turned out to be just the precision barrier (of the IEEE 754 standard). 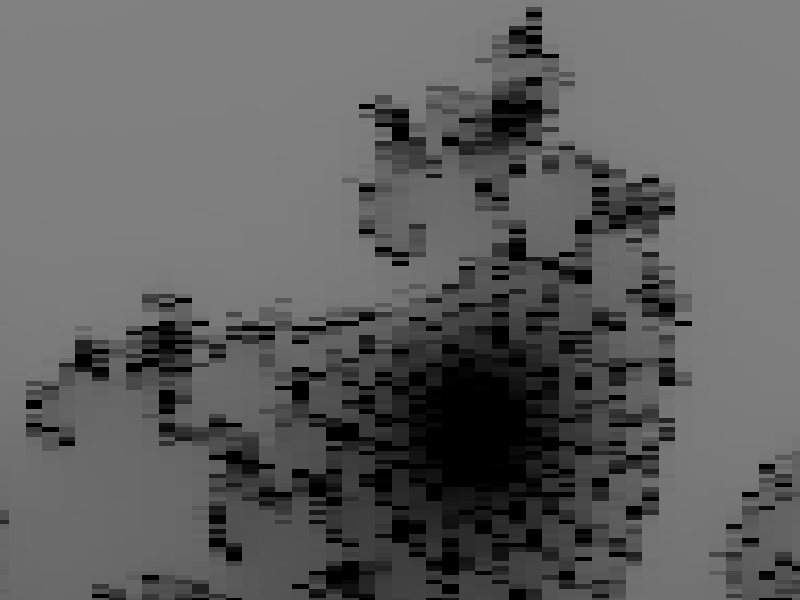 I had a feel-good moment the other day, when I saw this: 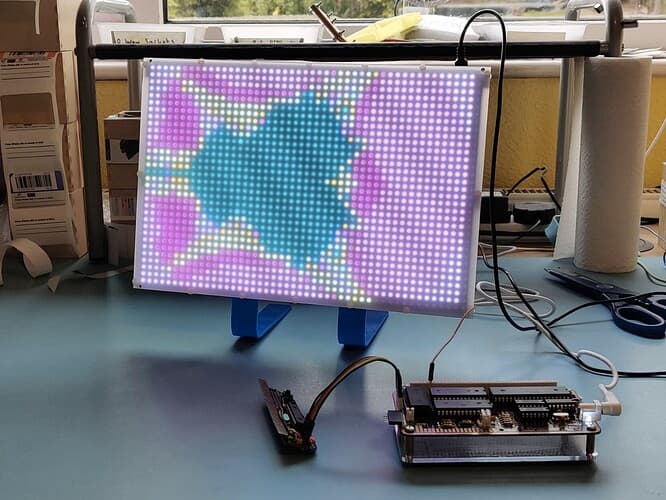 and immediately recognised it as our familiar not-quite-Mandelbrot. So I could recommend the two-line fix (to workaround the aliasing of long variable names treated as two-character names), and the result was posted shortly after, with the caption

Thank you. Yes, changing the ZR2 to ZT so it doesn’t clash with ZREAL worked just right. Looked great before, but so much better now 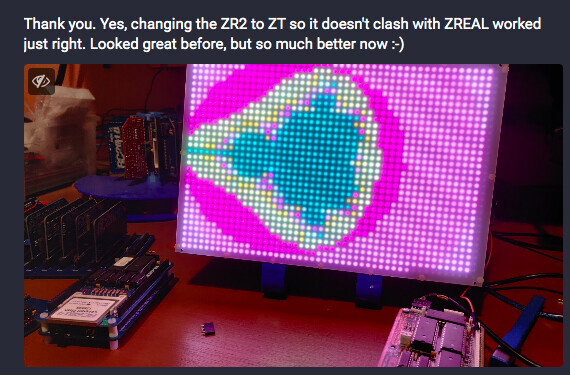 So the ‘bug’ is more about running manky old Microsoft interpreters than anything else?

This would never have happened under PDP-8 BASIC. Not because it’s better, but its compiler immediately keels over with a terse error message (line number plus two character error code) if it sees a variable with a name other than two characters matching /[A-Z][0-9]?/ (so A and A1 are fine, but AA is right out) . In common with many pre-micro BASICs, it also only supports IF «condition» GOTO «line number». It makes for some extremely tangled code. Naturally, I love it.

Yes, the flexibility of allowing long variable names while only have the first part significant is a bit of a misfeature in my view. (Did any other languages do this? I bet they did.)

There’s another not-quite-a-mandelbrot in this Computerphile video.

It was that fault that inspired me to fix and publish my text based Mandelbrot program as a sort of BASIC benchmark. I wrote the program so that it would work in all the BASICs I had access to at the time (hence one statement per line) - Applesoft and other “generic” 6502 Microsoft BASICs as well as 8080 MS BASICs, BBC Basic and a few others.

Is it a good benchmark? Probably not really, but it does highlight floating point arithmetic speeds over the BASICs I tried (tl;dr BBC Basic 4 faster than other BBC Basics on the 6502 and faster than BBC Basic on Z80 - almost 2x faster than MS Basics - for the same clock speeds).

Yes, the flexibility of allowing long variable names while only have the first part significant is a bit of a misfeature in my view. (Did any other languages do this? I bet they did.)

Several Forths from the 1970s would use 32 bits to store the names in their dictionary: one byte with the length of the name followed by the first three characters. Only names longer than three characters with the exact same length and initial characters would cause confusion and this was considered to be rare enough to not matter.

Thanks, Gordon: that’s nicely structured and will run almost anywhere. It is really giving basic floating point arithmetic a workout. It does take rather a long time to run, and really works best on a big terminal or 80-column printer.

The similar benchmark used by the mostly CP/M (80 and 68K) crowd over on Retrobrew Computing is known as asciiart.bas. It’s likely as portable, but not as well structured:

Every BASIC Mandelbrot (or Brooks-Matelski, if you want to be a bit of a hipster) program suffers from the languages lack of complex variables. FORTRAN makes the core of the computation much more readable:

About that - just stumbled on a stackexchange Q&A where Matelsky himself confirms the parameters on the original image: 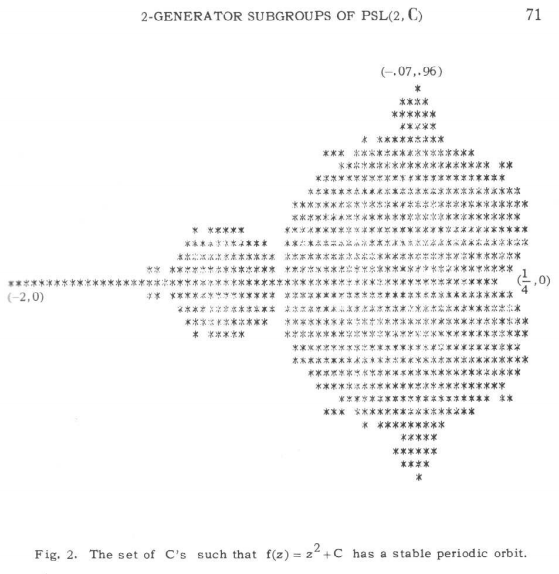 (It seems this paper was written before Mandelbrot’s and was available in preprint, even though it was published after.)

Here are the original parameters, according to JPM:

yes, note the name of the commenter in the MetaFilter via … I have been known to be self-similar on different platforms