I came across some resources on Jim Butterfield, who wrote The First book of KIM (sample). Here’s a TV interview:

Anyone who took their Commodore computer at all seriously will have known the name Jim Butterfield, or at least encountered his prolific writings in magazines or his own books, his appearances on television or his various appearances at computer clubs and shows. Jim was a (if not the) major celebrity in the world of Commodore. 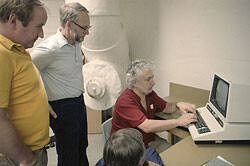 (image from Mike Todd’s page, above)

The story of HyperTape and the First Book also gets a mention in this excerpt from Typewriters and Adding Machines, chapter 1.5, Tim and Kim.

via some discussions about KIM tape format, which led me to:
Hyper about slow load times? KIM Hypertape is an alternative (four page article by Jim, as seen in @HansOtten’s KIM document collection). This article was published in Kilobaud, The Small Computer Magazine ISSUE #11 November 1977.

Also a mention in that discussion of Kimposer “a free web-tool that converts the listing of a KIM-1 program (or the byte codes) into a wave file”.

Watching the video… I had forgotten that the PET could be opened like the bonnet of a car, with a pole to hold it up and everything! That’s a different level of serviceability than most i-Products today

Added: The final question at the end, “Can a computer in your home invade your privacy?”, and the answer, “Not at all! It’s your computer, nobody can look at it except you!”. Oh my, how times have changed…