In search of 48 bit computers

I’ve been hunting for 48 bit computers - and found a few. Let me know of any I’ve missed…

I found a few in “A Third Survey of Domestic Electronic Digital Computing Systems” a huge 1961 document from the Ballistic Research Laboratories. From there, for starters, here’s the transistor-based Philco 2000: 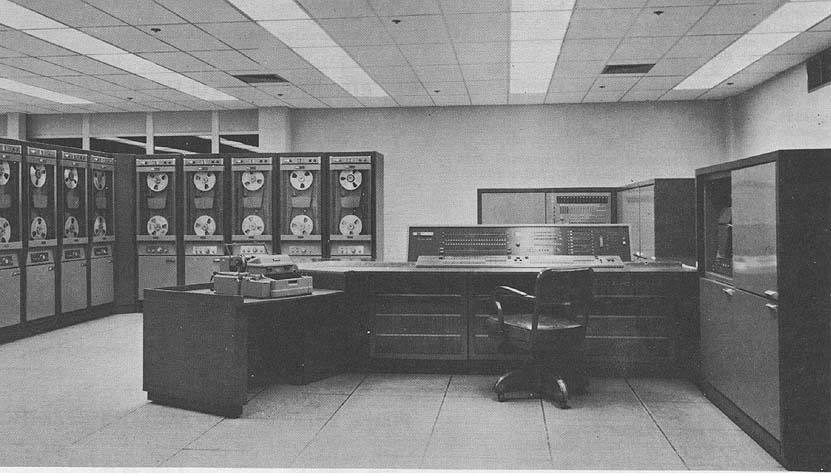 Here’s a video about Philco and their machines:

Now let’s see what’s in the Third Survey that merits a 48 bit description - detailed technical descriptions and some photos and diagrams at the links:

The B5000 was designed to be an Algol machine.
…
So the worlds greatest computer expert returned to Europe and told his friends about the amazing B5000 Algol system. They decided to order three B5000s.

The Burroughs Large Systems Group designed large mainframes using stack machine instruction sets with dense syllables and 48-bit data words. The first such design is the B5000 in 1961. It is optimized for running ALGOL 60 extremely well, using simple compilers. It evolved into the B5500.

I also found some info on the use of 48 bits as a floating point data size:

The historic English Electric KDF9 computer used a floating-point format very similar to that of the IBM 7090 computer, except for being adapted to its 48-bit word length.
…
One solution would be to use 48-bit integers, and 48-bit and 96-bit floating-point numbers, as the ICL 1900 did
…
The Scientific Controls Corporation 660 computer also used, as its normal floating-point format, the full 48-bit format shown in this section of the diagram.

“The basic Orion machine included 4,096 48-bit words of slow, 12μs, core memory, which could be expanded to 16,384 words.[10] Each word could be organized as eight 6-bit characters, a single 48-bit binary number, or a single floating-point number with a 40-bit fraction and an 8-bit exponent. The system included built-in capabilities for working with Pound sterling before decimalization.[13] The core memory was backed by one or two magnetic drums with 16k words each.[14] Various offline input/output included magnetic disks, tape drives, punched cards, punched tape and printers.”

I guess, there may be other early one-of-a-kind machines using this kind of mirco-level instruction layout, especially relay computers.

The Atlas Computer was one of the world’s first supercomputers, in use from 1962 until 1971. It was considered to be the most powerful computer in the world at that time.[1] Atlas’ capacity promoted the saying that when it went offline, half of the United Kingdom’s computer capacity was lost.[2] It is notable for being the first machine with virtual memory (at that time referred to as ‘one-level store’) using pagingtechniques; this approach quickly spread, and is now ubiquitous.

It’s interesting to contrast the old architectures that were, apparently, much more focused on numeric computation than simply “data processing”.

Back on the CDC systems, with their 60 bit word, and 6 bit character set. 10 character per word, lowercase took 12 bits since you prefixed a normal character with a ^.

Simply, if you were doing TEXT processing, you had to jump through hoops (and thus had efficiency costs) to do the processing in contrast to numeric works that could use the native word size.

Of course, today, while we’re back up to 64b architectures and large register spaces, the machines are more adept at working with the smaller word sizes (8 and 16bit today for text processing). Arguably, the vast majority of modern data processing is more text based than numeric, at least in terms of actual data moved. Arithmetic (both floating and fixed point) is still very important, but now it all comes with a boatload of extra data to track with it.

Mind, I’m making all this up.

The system included built-in capabilities for working with Pound sterling before decimalization.

I guess before crypto instructions, you had to get your competitive edge somewhere.

The IBM ACS-1 project (1961-1969) was a 48 bit machine that first implemented a bunch of features now seen in modern processors.

Marvellous! and thanks @B.B and @NoLand for your findings too. Some great machines.

The 1301 was designed by an ICT and GEC joint subsidiary, Computer Developments Limited (CDL) at GEC’s Coventry site.[1]

The computer was announced in May 1960. The first customer delivery was in 1962, a 1301 sold to the University of London.[2] About 150 to 200 of these machines were sold. One of their main attractions was that they performed British currency calculations (pounds, shillings and pence) in hardware. They also had the advantage of programmers not having to learn binary or octal arithmetic as the instruction set was pure decimal and the arithmetic unit had no binary mode, only decimal or pounds, shillings and pence.

ICT 1301 machine serial #6 “Flossie” had an interesting history. The first to be installed at a customer site at the University Of London, there were five previous machines, but they were used for software development and design troubleshooting.

It was scrapped by the University and bought by a group of students who restored it and ran it as an accounting bureau for five years, scrapped again and given away for free via the Amateur Computer Club magazine, stored in a barn for 25 years and then restored again with the help of the Computer Conservation Society, was again at risk of being scrapped and now in storage at The National Museum of Computing at Bletchley Park, England.