Here’s the internal IBM forecast for sales volume of the Personal Computer, whatever that was to be: 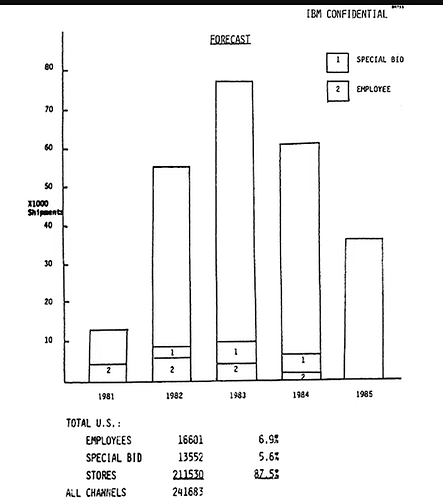 This is the slide that IBM used to make a decision about the future of personal computers. It is the costliest slide in business history. This is a $200 billion slide.

The above diagram, caption, and the following quotes are from this article.

This product [the personal computer] was so funky that the theory was that pursuing it was going to kill Apple. That was the goal: get people back to real computers [large mainframes] because real men use big machines. It was nine men in the room making this call, and they got it totally wrong. The correct answer was 25 million units sold over that five year period.

So, they were a little bit off and they said, “Okay, 241,000 units, a couple thousand dollars a unit. Well, it’s not worth developing a chip. Intel, give us the chip. And there’s this kid from Seattle, Gates or something, who has got an Operating System called QDOS. He’ll give it to us for free, we’ll put it on the machine, we’ll put it in a box, we’ll call it an IBM computer.”

This was the moment they almost lost the future of the company, because they could not imagine that the world could be so different, that people would like a box with 16K of memory in it. That just seemed inconceivable to these nine men, who were the smartest people in their industry, who knew everything about what they were doing and yet still got it completely wrong. And it literally almost killed IBM as a result. And of course, they no longer make PCs because they could no longer compete, et cetera. This slide is why Bill Gates is one of the richest men in the world. If IBM had said, “You know, maybe there really is a future here, and we’ll develop our own operating system and our own chips,” it might’ve been a very different story.

As I understand it, because the forecast was so very wrong, IBM priced the machine according to low volumes, and in the short term made much more profit than they expected. At the same time, they were content to buy in the processor and the operating system, and use commodity parts. Their expectation was that the Personal Computer was not something with a future, and that Apple would fail, and Microsoft were irrelevant.

I suspect the same for DEC and thier DOS computer, short term fad.
Main frames are back only beacuse we have cheap high volume digital
networks. Would you have the cloud at 10 cents a minute?
Ben.

How could there have been 25 million PCs sold by the end of 1985? IBM’s sales for 1983 was 750 thousand units (which is still ten times the estimate in that chart) and clones were just warming up.

Note that if we just count IBM PCs themselves and not XTs, ATs and clones then the shape of the curve was right even if the numbers were not. Though the PC was sold until 1987 it was quickly overshadowed by the XT as soon as that was introduced in 1983.

About an IBM processor for the 5150, it already had the PALM used in the previous 51X0 models. As a board with a bunch of chips I would guess that it was more expensive than the 8088. But the real reason to prefer the Intel chip was that new software was being released every day for it but PALM only ran code developed by IBM itself (Basic and APL and no applications at all).

Where does a IBM PC/APPLE fit with CP/M card?

But the article was about a planning meeting at IBM about how many machines the company was going to sell. They estimated 241 thousand units, and the article makes fun of them saying the actual number was 25 million. I was supposing that the two numbers were meant to be the same thing: how many machines IBM would sell.

That last line reminded about something, IBM never sold computers before then, It was all leased equipment.
Ben.

Almost: AIUI some countries (in Europe?) had sales rather than leases, which is why there’s a small number of the early machines still in existence.

In the mid 1970s the IBM 5100 was, as far as I know, only sold and never rented. So while renting was the more popular option for mainframes, IBM certainly did sell products before the PC.

In the 1970’s I could only dream of computers,
only well after the PC came out could I afford a computer
at ‘home’. Out in the back woods does not imply a great
computer access, a BEAR yes, a IBM computer NO.
Apples are for pies
Ben,

That last line reminded about something, IBM never sold computers before then, It was all leased equipment.
Ben.

My father was actually involved in negotiating a buy from IBM for the Austrian Federal Forests (a conglomeration of nationalized former Habsburg estates, land from monasteries dissolved during the enlightenment, etc, Austria’s biggest land owner) ca. mid 1970s. Due to legislation the Austrian Federal Forests would never lease equipment, but only buy it. It was new territory for everyone involved: the Federal Forests were new to computing and had never bought a computer (at least, at this scale), and IBM had never sold one.
As a fallout of this, we had all these nice contemporary IBM PR material at home, which is probably, why I am here. (At the time, IBM was launching the system/370 and entered a phase of historic self-assurance, so these brochures illustrated in bright colors how IBM had invented and refined the computer all on their own, from Pascal’s calculator up to the the S/370. Compare: https://www.computerhistory.org/brochures/doc-4372956dd1eb0/ – mind the PDF download link there)

Almost: AIUI some countries (in Europe?) had sales rather than leases, which is why there’s a small number of the early machines still in existence.

Apparently, the “German 1401” at the CHM was originally sold to the Volkswohl Versicherung (an insurance company in Dortmund, Germany).
But I’m not too sure about this, as the description provides both monthly rental fees ($10,600/month in 1961) and an estimated purchase cost ($500,000 in 1961 – are these references to the BRL Report?). However, it was definitely sold to its former on-site engineer (IBM customer engineer), around 1972. (The website doesn’t mention, if this was purchased from the Volkswohl Versicherung or from IBM, but at this time it was used equipment.)
Compare: http://ibm-1401.info/1401GuidePosterV9.html (section “This 1401’s History”).