Valentin Albillo, a long-time writer of interesting or amusing notes on HP calculators, has recently rebuilt his own site collecting his papers and findings, and in this one he compares the very comparable near-contemporaries: the HP-41C which is an alphanumeric-capable programmable calculator, and the PC-1211 which is a handheld Basic computer.
Know Thy Foe: A New Contender (pdf) 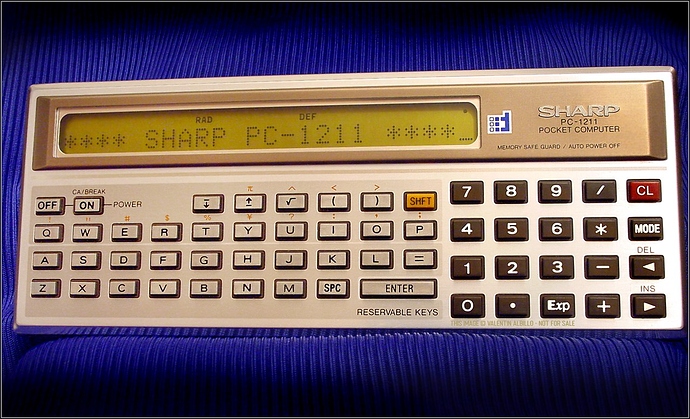 Here’s his site, which is still being repopulated from a previous long-dead incarnation:
Valentin Albillo’s HP Collection

Some of his writings were previously not freely available on the web, so this should be good. I particularly like these:
HP Article VA004 - HP-12C Tried and Tricky Trigonometrics
HP Article VA005 - HP-12C Serendipitous Solver
HP Article VA006 - Long Live the HP-15C
as now available in his HP Articles collection.

We had this comparison in the classroom (without any foes)…

There was also a fairly popular Casio handheld (with rather short display lines, but two of them), but I forgot the model number.

Pages for logged out editors learn more Line Printer via one of: PC via one of: The Casio FX-850P is a scientific calculator introduced in 1987 and sold until 1999.

Edit: Maybe the FX 740P (I think, this is also the model, Electronika copied externally. But this one has just a quite big status line. However, memory may me not serve that well on this particularity.)
http://pocket.free.fr/html/casio/fx-740p_f.html