How to use a Slide Rule

Saw this recently, although I’m sure it’s been up for some time…

You can buy them here.

The Slide Rule Universe, literally everything about buying and using slide...

Sphere's Slide Rule Universe is a library of information about slide rules, pictures, history and links plus a full on-line store for all types of slide rules. Located in West Kelowna, BC, CANADA.

There are 1000’s on ebay… Relatively cheap too.

I checked and can “refresh” my old Aristo for under £20…

When I was in highschool (mid-1970’s) I was one of the very few who knew how to use a slide rule - most kids were using calculators. In my physics class, we had a 6-foot demo slide rule hanging over the black board. One day we had a test, and when I took my calculator out to use it (we were allowed) the batteries were dying. I picked up my test paper, and walked up to that demo. My teacher looked over at the only other kid who knew how to use a slide rule, and saw that he was busy banging away on his calculator, so the teacher let me go. It felt good, being able to use a backup to my calculator right in front of the class and knowing that no one else could get anything from watching my work.

As a school anecdote - in secondary (high) school, in round about 72-79, we weren’t allowed to use electronics calculators (not really invented and then not affordable anyway) in maths, but latterly we could in engineering and physics, however I had a slide rule and was allowed to use it if I could demonstrate it’s use to a teacher - which I could.

Mostly because I think we were all taught how to use log-tables (and sin, cos, etc.) and slide rules are just a more compact version of that in a way… 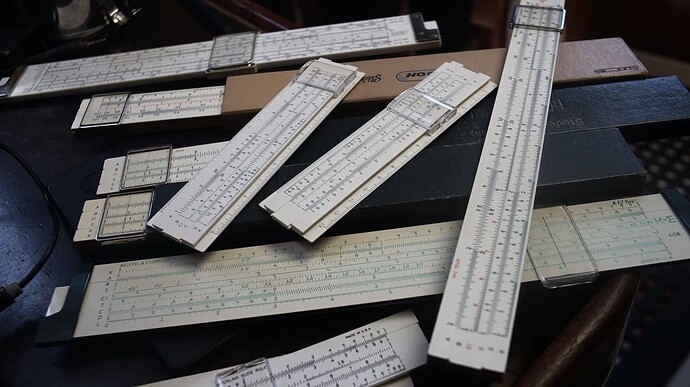 Somewhere in my house collecting dust is a slide rule. I learned how to use it but never really needed to once calculators appeared.

Oddly enough, I was moved to buy a new circular slide rule as a result of this thread - I have a few linear ones which I already don’t use. It’s ¥3200 which isn’t too much for me (not $3200 as detailed on the confirmation, which is too much for me.) But it turns out current conditions make it unavailable for shipping to the UK. So I’ll get a second chance to go wild, or not go wild, when conditions change.