There’s a nice article on Hackaday about Dr. Allen Vincent Hershey, his original vector fonts, and why these are still used today: 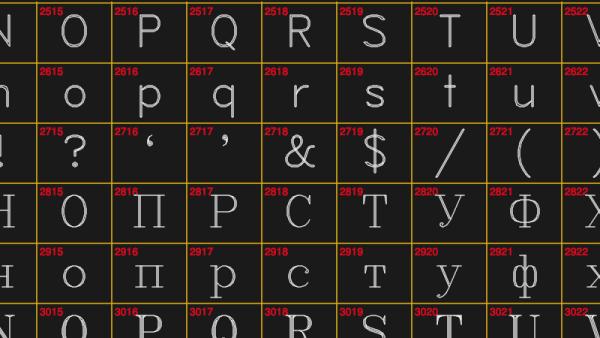 Hershey Fonts: Not Chocolate, The Origin Of Vector Lettering

Over the past few years, I kept bumping into something called Hershey fonts. After digging around, I found a 1967 government report by a fellow named Dr. Allen Vincent Hershey. Back in the 1960s, h…

Edit: Some useful links from the HN discussion: 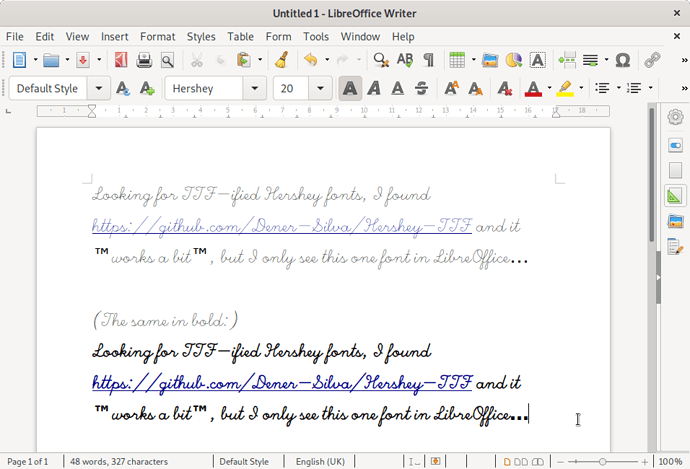 Well, I didn’t know that there is a script font, as well…

I can see many more Hershey fonts in Gnome’s font overview but only that one shown above in LibreOffice. 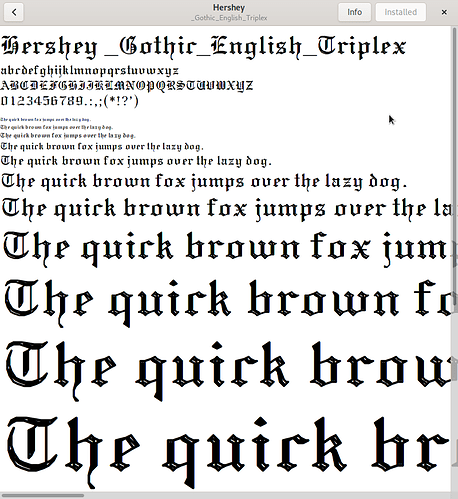 Would be funny to have them all in LibreOffice, but not essential, as I spend most of my day in XTerms and Emacs.

I’ve spent more time than I’d like to admit with Allen V. Hershey’s fonts. The well-meaning mod.sources Usenet Font Consortium conversion from the 1980s broke a few of the glyphs, and there’s no machine-readable version of the original NTIS data that I know of.

Curiously, Hershey’s data format is a lot closer to what we might want to use now than the mod.sources reformat. There’s some very 1980s Unix-culture-knows-best hubris in the original posting:

While I embarked on a project to convert the fonts to a modern format — scruss/AVHershey-OTF: Simple OpenType versions of subsets of the Hershey vector fonts — the fonts are a pain to work with:

There are lots of fonts out there that are prettier and easier to use than the Hershey fonts. It’s remarkable that millions of dollars worth of computer time were allocated to this project in the 1960s.

I think the problem is bit mapped displays have yet to have good anti-aliasing.
They fake it by coming out higher and higher screen resolution instead. Ben.

Modern displays have great font hinting, right down to sub-pixel RGB anti-aliasing. It’s just that single line fonts like the Hershey vectors can’t use hinting, as it is something that can only be applied (pretty much manually, per glyph) to a filled vector font.

I was thinking more on the graphics primtives. draw line A to B with antilaiasing
thickness small. Is there even a device independant video interface standard
out? I never liked the idea of modern GUI’s being pixel organized. There must be something better.

I think the problem is bit mapped displays have yet to have good anti-aliasing.

Actually, we’re going in the other direction. macOS, for example, has reverted from subpixel rendering to rather archaic double-size rendering and shrinking… The prospects are not the best.

I think we’ve been a bit spoiled by LCD displays - especially the earlier versions. The pixels were so distinct, we got used to seeing characters as a matrix of discrete rectangles. So when you move towards anti-aliasing, or any kind of scaling, you get some proportion of people complaining about blurry fonts. Hopefully, with later higher-resolution LCDs, we can have anti aliasing and everything looks like ink on paper.

I’ve been dreaming of this (responsive high resolution passive display, much like 300dpi e-ink) since the early 1990s. While I think that this would solve most display issues, I don’t expect to live and see it yet.

Computers seem to be television right now, with the way web browsers are going.
My complant is you can not get a 3:4 displays anymore, for older machines
like mine. Like you I wait for fast ink on paper like displays.

My complant is you can not get a 3:4 displays anymore, for older machines
like mine

Do not despair, displays are becoming relatively higher again (compare the new MacBook[Air] series with 16:10 display ratio) and 4:3 displays are coming more into focus again. I guess, we will see some on the market in reasonable time.