The University here had a hackathon this weekend, and I took advantage of a building full of computer nerds to put on an impromptu mini retrocomputing expo.

Hackathons are events where people (typically college students) take 24 hours and build something. In this case most of those somethings were software applications, although there were a few hardware-related projects. None of them were retro that I saw. Hackathons are thoroughly enjoyable events with a lot of good, positive excitement about making stuff.

Since I have an office in the building where this took place, and many of the participants are my students, I set up some retro hardware in my office and announced that I’d be doing a retrocomputing mini expo during the event. I wound up doing extended retrocomputing presentations four or so times during the event, with a few shorter spiels, to groups of five to maybe fifteen students. With some churn during the longer presentations, I’m guessing somewhere between fifty and seventy-five students came.

I set up three systems for students to see and play with, although most students were shy to actually use the hardware:

The PDP-11 was really the star of the show, and blew a lot of minds, of course. The Osborne got the last attention (probably due to its physical location), and the TI had the most hands-on users (likely due to both location and the speech synthesizer being accessible from BASIC)

Here’s a photo of the setup in my office: 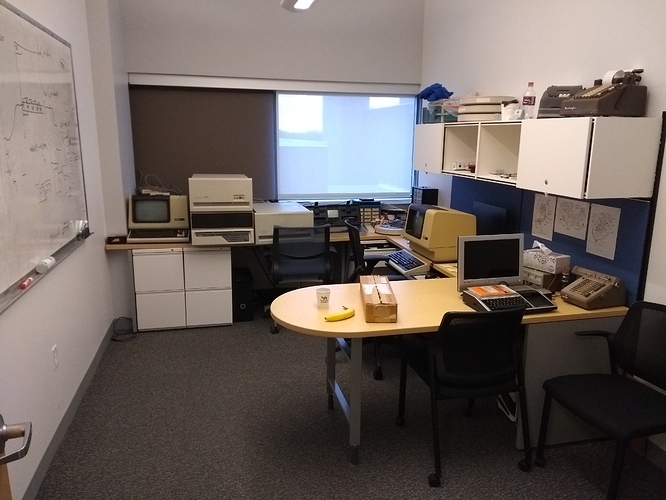 I really enjoyed myself, and I think many of the students did, too. I think it increased their appreciation for both how far we’ve come and how much was done with so little.

I plan to keep the machines in my office for a bit to see if anyone wants to come play after the event. At least one student (one of my teaching assistants) was buddy hacking out one of our course projects in MACRO-11 in SIMH by the end of the weekend, I plan to let him run it on the metal.

An excellent idea - showing that one room, and just three machines, is enough for a mini-expo!