I found a 1975 German book mentioning “unorthodox” machines (so non-von Neumann architecture).
There were some German terms, that I first haven’t found and I first only had the TOC, but later found some previews. They are described in Flynn’s taxonomy like SIMD (Single instruction stream, multiple data streams).

Feldrechner (no entry on German Wikipedia) are array computers (vector computers). And an array computer with a strongly reduced instruction set would be an associative computer. Wikipedia: Associative array, Content-addressable memory (CAM). 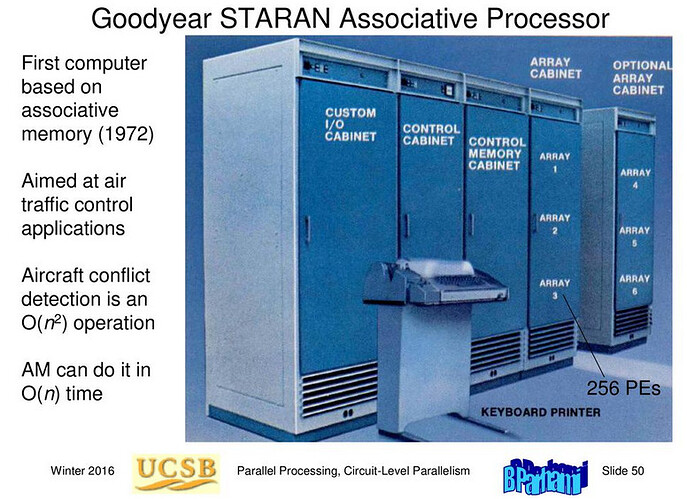 STARAN in the information technology industry might be the first commercially available computer designed around an associative memory. The STARAN computer was designed and built by Goodyear Aerospace Corporation. It is a content-addressable parallel processor (CAPP), a type of parallel processor which uses content-addressable memory. STARAN is a single instruction, multiple data array processor with a 4x256 1-bit processing element (PE) computer[clarify]. The STARAN machines became available in ...

Another, more famous array computer (but not associative) was ILLIAC IV.
Another unorthodox machine is a Zellmaschine/Zellrechner (MIMD design). Not exactly sure what this is (in 1975). Obviously a parallel/super computer, maybe transputer.

When I worked for DEC, I did a number of projects for Goodyear Aerospace and Goodyear Tire. One of the projects was to write a device driver for a VAX that communicated to the debug/programming port of the later version of the STARAN called ASPRO. This was a box approximately 2 ft square and was was meant to be used as a targeting computer for E2C AWACs planes.

Excellent - content addressable memories are a wonderful invention, a component for parallelism.

But I have never seen any large CAM’s , it was allways the odd data book,
that just had something weird. Take the Signetics 101155 for example.
A 16 bit ECL CAM chip from 1977
Ben.

When I was designing a multi-68000 computer in 1983, a new 4K entry CAM chip was announced (I forgot by which company) and I seriously considered using it for the MMU in my machine. It was absurdly expensive, so I ended up using the newly announced 22V10 PAL chips instead with a hashed memory.

Later on much larger CAM and TCAM chips were launched and many high end networking cards used them.

An example of a CAM in a popular product was Acorn’s MEMC chip for the ARM2 (VL86C110). It’s MMU used a 128 entry associative memory, each one corresponding to a physical page. This meant that as you added more DRAM the pages had to be larger and larger since the table couldn’t be extended.