From A short history of GB3VHF: Richard Russell built this amateur radio beacon which operated through the 80s and most of the 90s.

A further round of changes were instigated as the 1970’s drew to a close, with the beacon keeper Brian Bower G3COJ introducing a microprocessor controlled keyer built by Richard Russell, G4BAU, with Morse code for the callsign and RTTY for a detailed location identification. This keyer was based on a Z80 microprocessor and to eliminate the possibility of ‘crashing’, the keyer used no RAM at all, and the processor was actually reset at twice the RTTY bit rate which was 45.45 baud - it was effectively rebooted about 90 times a second!. This was possible because the Z80’s registers (at least in the CMOS version) preserve their contents through a CPU reset so it was possible for the code to ‘continue where it left off’. 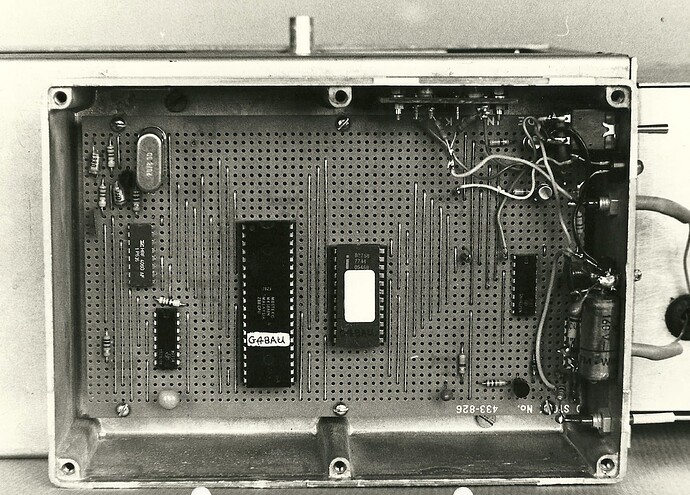 This is also a RAMless design, with all state in the Z80’s registers.

(Richard later wrote the first, and many subsequent, versions of BBC Basic for the Z80, initially for CP/M and then ported for Acorn’s Z80 second processor for the BBC Micro. BBC Basic is now open source and still being ported to new platforms.)

to eliminate the possibility of ‘crashing’, the keyer used no RAM at all

If it’s sending out a fixed pattern, wouldn’t an (EPROM-based) state machine have been sufficient?

and the RTTY bit:

Still have the prototype, still works