Footage of Bouncing Ball on Whirlwind

I found some footage of what seems to be “Bouncing Ball” on Whirlwind I on a stock footage site:

At least, it’s Bouncing Ball and it seems to be from a collection of snippets from a film showing Whirlwind I (in color!), as seen here: https://www.pond5.com/stock-footage/item/156129252-computer-development-development-and-modernization-first-com, one of those videos also explicitly mentions Whirlwind I in the description (“daily routine,” probably footage of a Williams tube memory test): https://www.pond5.com/stock-footage/item/155847153-early-1950s-whirlwind-i-computer-facilities-mit-illustrating

And here’s another part of this film showing photographic hardcopies of Bauncing Ball, a diagram of the underlying equations, and what seems to be a screenshot of the memory contents: https://www.pond5.com/stock-footage/item/155847256-computer-development-development-and-modernization-first-com

I’m not aware of any similar footage.

The entire collection can be found at https://www.pond5.com/artist/vintagestocker#1 and the search term “computer development”.

That is an interesting find. I’ll paste some screenshots - fair use, of course.

For comparison, I did find this video which at 6:29 pans around the Whirlwind’s control room: 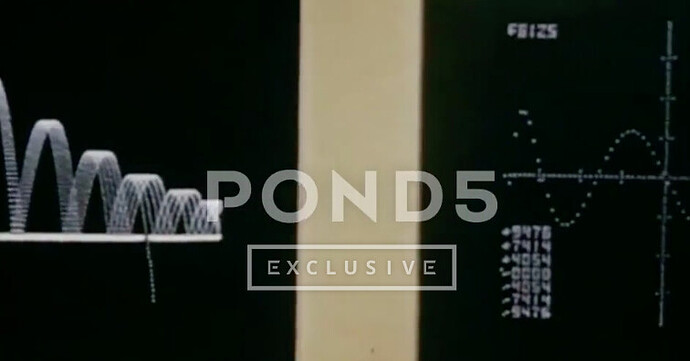 Oh but wait, here’s a short probably-1954 film from MIT (“Making Electrons Count”) containing some of those paywalled sequences and the bouncing ball just before the 11 min mark: 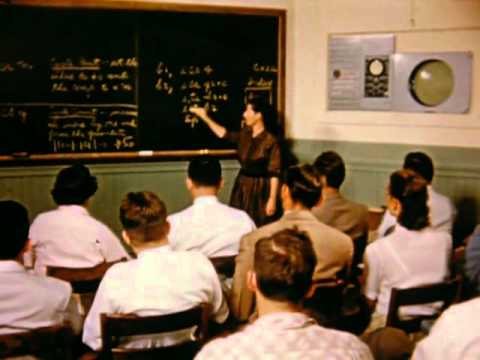 A Response to Ahoy’s “The First Video Game”

Youtube content creator Ahoy (Stuart Brown) recently created a video on a subject near and dear to my heart, tackling the subject of the extremely early games and what could be considered a first i…

(which seems to include input from @NoLand!)

However, just about two weeks prior to the publishing of the video, Alex Smith discovered an even earlier source pointing at the Bouncing Ball demo as having been altered into a game with specifics. Norman Taylor, one of the long-time Whirlwind Project members, gave an account in 1989 to the SIGGRAPH conference about his work on the computer as well as his claim that Jack Gilmore was responsible for altering Bouncing Ball from a simulation into a game which he claims as the first computer game ever created.

Note the hole in the floor on the right image.

As it turns out, MIT has a public collection of declassified Project Whirlwind documents – over 1,700 in all – on their Dome Archive website. A quick search turned up something entirely new. We not only know now when the Bouncing Ball program was made, but also can ascribe new authorship. The February 2, 1951 project report describes the new program on Page 2 by a part time student: Oliver Aberth.

Great find, “Making Electrons Count” is definitely the source of those bits of footage!

And there is something to be learned from this: The spot whizzing horizontally from left to right is actually the “floor” with the hole in it. As this is drawn quite fast, probably too fast for a human observer, and also quite infrequently (before the ball appears for a new bouncing series, much like as to expose the “problem”), this really suggests that Bouncing Ball isn’t to be observed in real-time, but rather through the means of time series photography. (Which isn’t to be inferred from the stills.)

Here are a few screenshots, the first showing the floor being drawn – mind the gap: 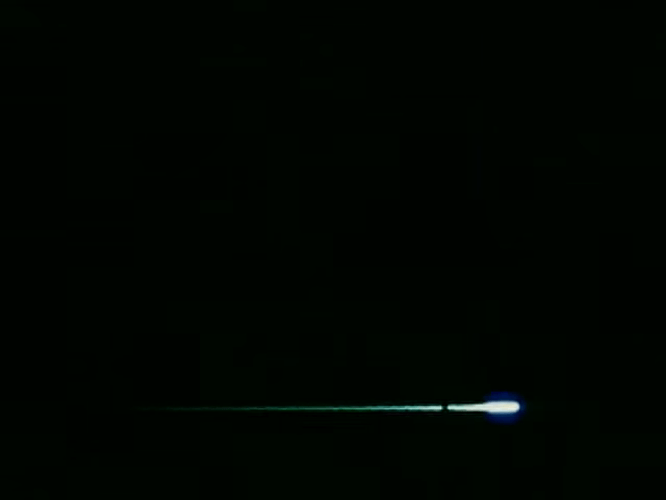 The spot vanishing on the right side of the display and the ball appearing: 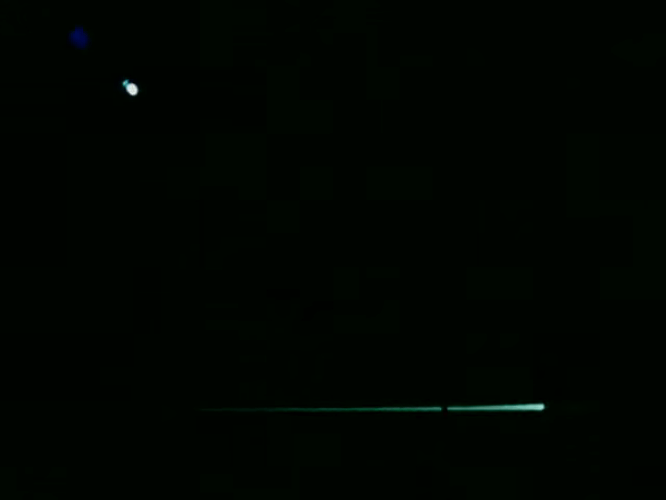 And here the ball falling through this very gap: 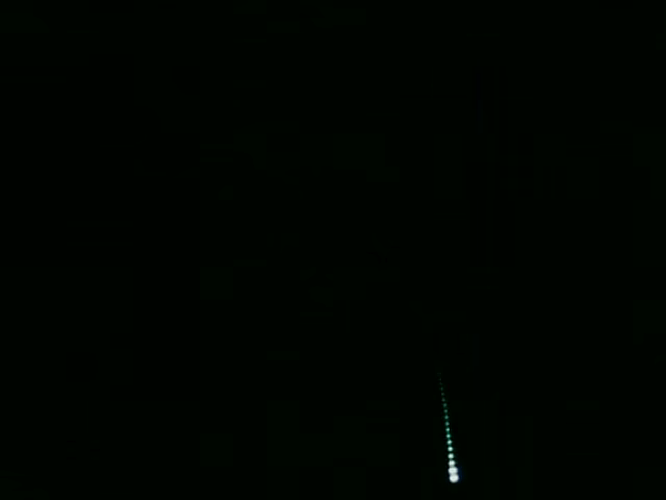 Also, thanks for linking Ethan’s post (The History of How We Play), I hadn’t seen it yet. – He had contacted me on the subject, but I didn’t find a post resulting from this in the time immediately following to this. And I seem to have missed it, when it was eventually published. (I even considered to write my own response, but didn’t want to sniper Ethan’s post on the matter. But I do have a few objections to the video, not on the research, which is thorough, rather on the inherent categorizations.)

And here are the three (static) camera shots of Bouncing Ball as seen in the film: 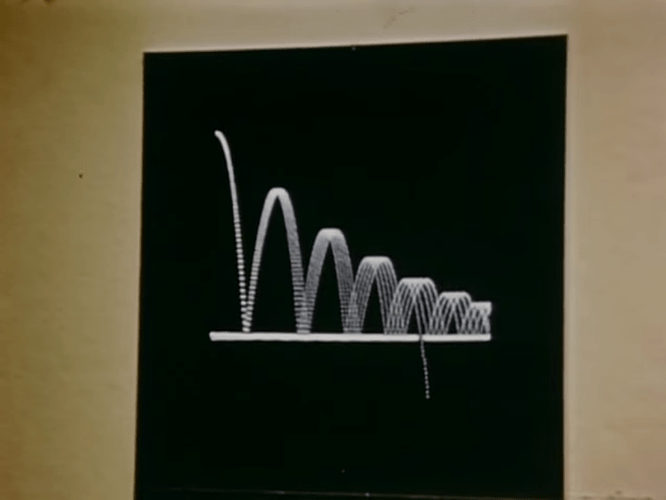 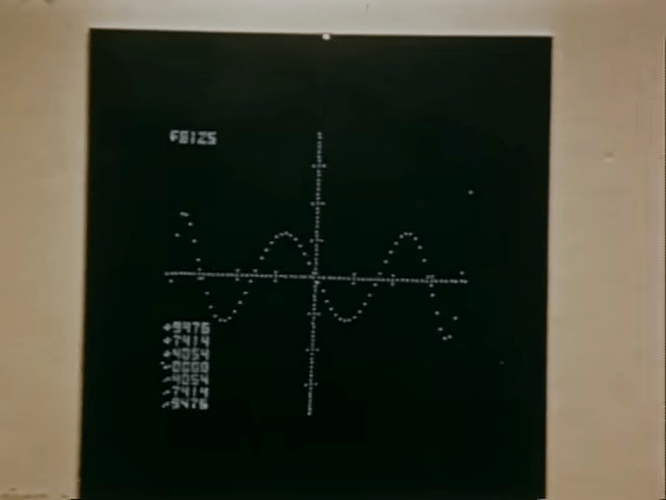 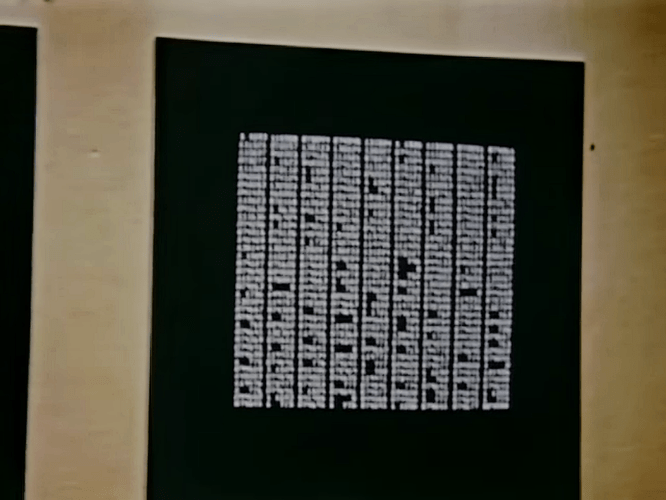 (The last one slightly enhanced, but still unreadable.)

P.S.: On a more humorous note, considering the first of these stills, we now know what Bouncing Ball is for: it’s clearly an early iteration of the on-board computer guiding Luke Skywalker on his attempt at hitting that opening to the Death Star reactor, Dam Busters-style (which was probably still the preferred method in the early 1950s.).

Regarding the game aspects, here are my two cents on the subject:

I think, William Higinbotham’s “Tennis” (AKA, Tennis For Two) is a prime example: The analog computer which Higinbotham used came with a few demos, all simulations to demo attractively what could be done with the computer’s opamp. Rocket launches, trajectories, Bouncing Ball, wind simulations, etc. What Higinbothom did, was “merely” a combination of these tiny, preexisting simulations, much what we would have called a mash-up in the 2000s, and combine these with an easily accessible real-time input for human players. Crucially, this came at the cost of the simulation aspect: while the building blocks were accurate, but self-contained simulations (that is, you could fiddle with the input values and see how this would work out, and, provided it was an analog computer, you could probably do it in real-time, as well), the combined result wasn’t an accurate simulation of the mechanics of Tennis, but added instead an openness to the flow of the program, which allowed human intellect to nest in this apparition of a consistent world sui generis and to project tactical and strategic possibilities onto it.
It’s pretty much the same with Spacewar!: By stepping back from the simulation aspect of the original “spaceship trainer” and adding gravity and a more unrealistic mode of navigation, it also introduced that crucial openness, which opened the simulation to tactical and strategic deliberation, by this making it the game as we know it – and, maybe, a game at all.

But this is, of course, just my perspective on this. But I’m not so sure, if this applies to Bouncing Ball, as well.

I’ll confess, I’m just a little interested in what those 2000 digits are (actually 1944 digit locations, maybe 1942 digits after the decimal) and why the array looks incomplete - if the gaps are 1s then it’s neither pi nor e. Or any other normal number: rather fewer than 190 dark digits.

Do you mean the dump seen on the third of those stills?

Yes indeed - I suppose they are in part showing off the display capacity, but whatever digits they are, they must have come across them somehow. And of course a pi calculation is a nice test of a computer.

I suppose, this is still related to Bouncing Ball. The gaps may mark major events, like a bounce. Mind that Bouncing Ball appears here much like an illustration for brute-force problem solving of a complex equation* (as seen in the second still): the simulation runs continuously with an input parameter varied incrementally between runs, until the ball hits the target (the hole), where the series stops (as seen in the first time series photograph). It would be somewhat natural to dump key values and/or coordinates for further use/inspection and document them, as well.

*) AKA “curve fitting” (which has some application in modern AI)
Regarding the previous Dam Busters references, mind that this was considered pretty much an unsolvable problem at that time.

Edit: That these photos are pinned at a wall side by side and that the camera pans over them in a swipe also suggests a relation to me.