Recently posted on Usenet, scans from Chuck Moore himself of the 12 pages of source for his very first Forth - and 4 bonus pages too.

… thought you might be interested to see the very first FORTH developed by Chuck Moore in 1968. Redirecting to Google Groups. This was the very first version of FORTH ever created. 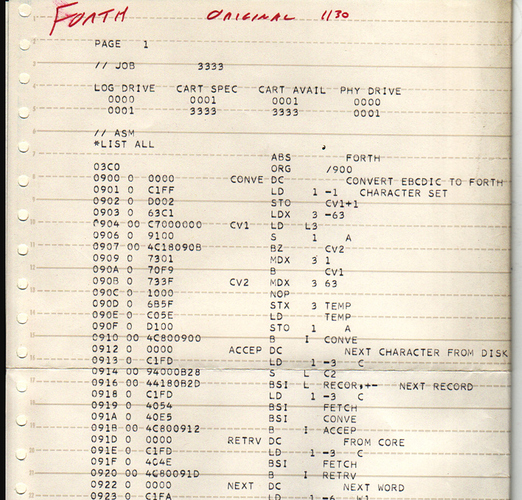 According to this page, there’s a prehistory of development before the 1130 implementation, but this is the first time it’s named as Forth: 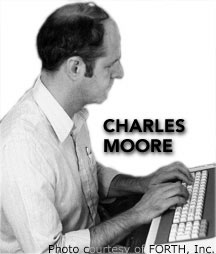 The Evolution of Forth

For fun, he also wrote a version of Spacewar, an early video game, and converted his Algol Chess program into the new language, now (for the first time) called FORTH. He was impressed by how much simpler it became.

Pages for logged out editors learn more The IBM 1130 Computing System, introduced in 1965, was IBM's least expensive computer at that time. A binary 16-bit machine, it was marketed to price-sensitive, computing-intensive technical markets, like education and engineering, succeeding the decimal IBM 1620 in that market segment. Typical installations included a 1 megabyte disk drive that stored the operating system, compilers and object programs, with program source generated and maintain...

In March of 2018, I was in correspondence with Carl Claunch, who had spent a few years restoring an IBM 1130.

He created a machine readable file of Charles Moore’s 1968 IBM 1130 assembly code - and then was able to compile the original Forth source code.

Restoring the original source code for FORTH on the IBM 1130

RESURRECTING ORIGINAL FORTH IMPLEMENTATION Working my way through the source code highlighted a few challenges to be overcome before we ...

The IBM was Chuck Moore’s first machine that had a disk - so his focus was to get the disk interface working.

Carl and I coined the phrase “Proto-Forth” for these listings - as it was clearly a major step on the journey to a fully blown Forth.

Carl went on to get this all to work on the 1130 simulator - and come up with the OK prompt.