I like the 60s and 70s Sci-Fi TV series Star Trek, Lost in Space, Space: 1999 etc.
Most have recycled 60s computers or panels like the Burroughs B205, others have fictional computers. But I wonder why they used 60s or 60s-like computers in series supposed to be in the far future.
Obviously they couldn’t imagine then, that a computer would look or be much different. Star Trek (TOS) had some innovative (mainly portable) devices, though. Pics are from Space: 1999. 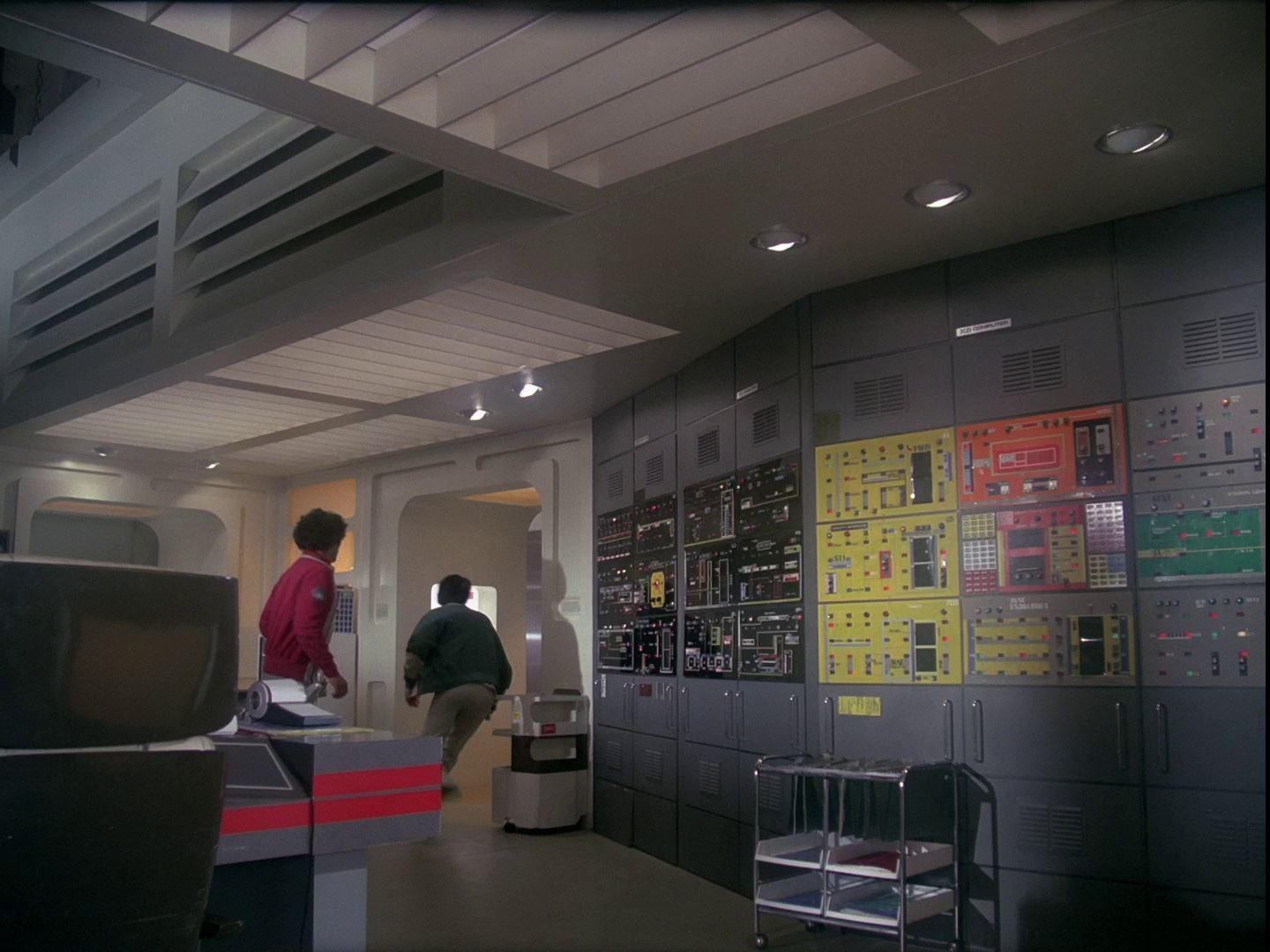 There was a thread here about some of the series

Does anyone have an educated guess what kind of computer Batman had in the 1960’s Batman tv show? That was when I decided I had to have a computer of my own. Unfortunately, I had to wait some 15+ years to get one.

I like the computers, devices and panel in Space: 1999 although they were quite weak, also not that modern, there were mainly wall panels, no or few screens on desks, no real keyboards etc. 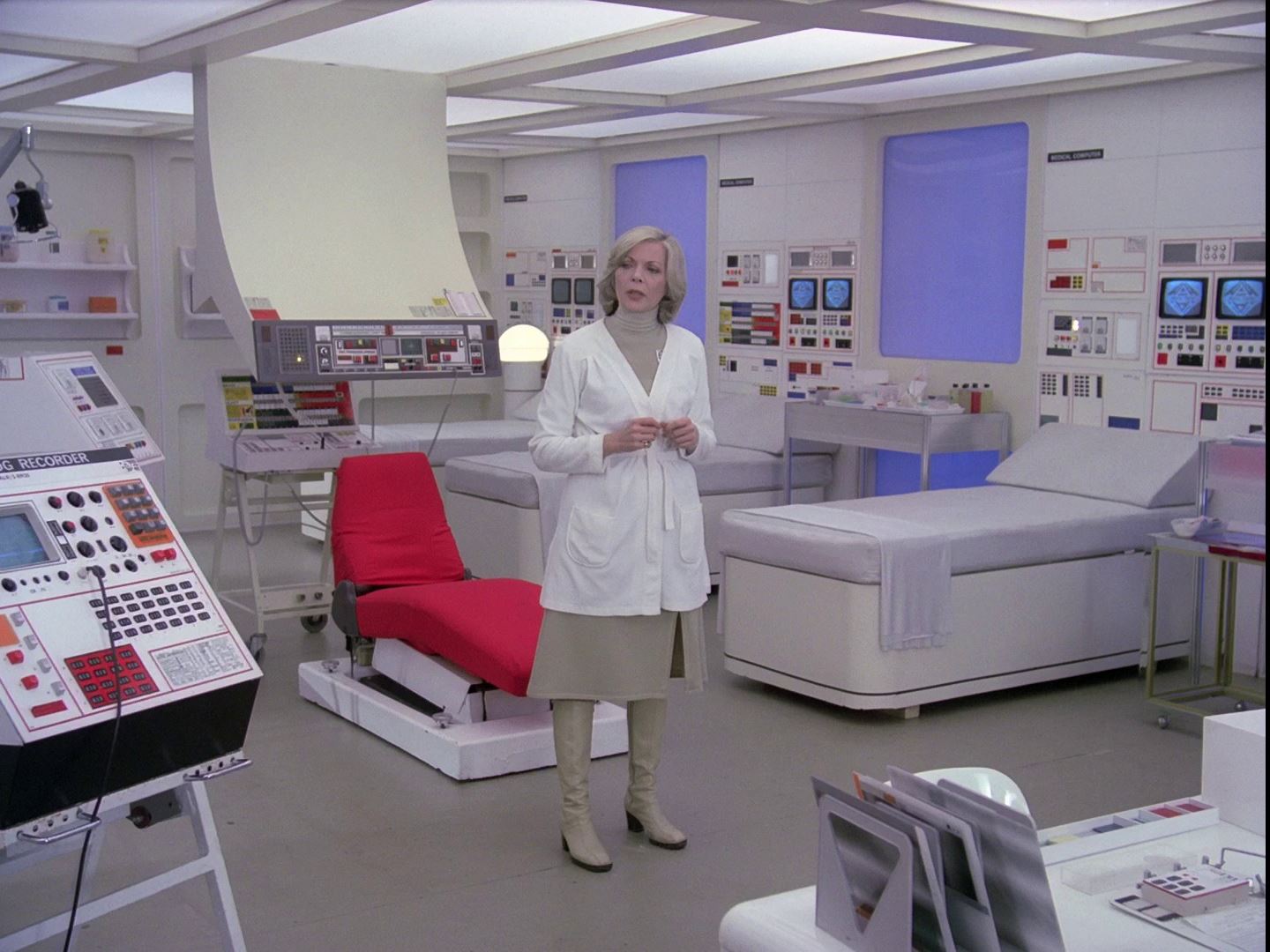 Computers and other thngs (space ships) have to look ‘like’ the future we beleve in
not what the future is tomorow, and what they look like today. In 1972-1975 computers
filled rooms, in 1999 they just filled walls.
Star Trek the next Generation was
intersting as all the computer stuff, had to be done with 1980 Apple computers
for special effects; Other than AI software, STG is 2000’s computer tec.
Ben.

An interesting thing about that is that the TNG era of Star Trek was so popular that it spanned nearly two decades of real time (7 seasons of TNG, 5 seasons of DS9, and 5, seasons of Voyager, + the movie “Generations”); so long that real world technology caught up with, and even surpassed, in some cases, what the fictional technology was capable of. This presented a kind of unsolvable problem for the makers of the show “Enterprise;” our actual hand-held touchscreen devices were much better than Crusher’s medical tricorder or Picard’s desktop PADD; there was no easy way to make “Enterprise” look like it was set in our future, but in Picard’s past.

The “Discovery” writers didn’t have to worry about it so much; since their show was a “reboot” no one has to wonder how the federation went from fancy holographic displays to Spock’s analogue flight computer in just a decade or so…

The definitive source for this kind of information is Starring the Computer:

Computers in movies and television shows

The only problem is, there is no PDP-10 in there. Rumor has it there is one in THX 1138, but I watched it and didn’t see one. Probably the Big Blue was mistaken for a KI10.

It’s hard to foresee what will be… even Isaac Asimov had problems sometimes. As a teenager I read his “I, Robot” series, and in one of the shorter novels a school class visited a factory where they programmed the Positronic Brains for the robots. And the programming was kept on punched paper tape… (the plot, if I recall correctly, was that one of the boys visiting managed to move around some of the punched paper, resulting in a mis-programming)

Starring the Computer is a good site (I already knew before and it’s also linked in the Batmo thread).
But I think they don’t have fictional computers. And somehow I think, there are many movies missing.

I wouldn’t mind doing some programming with paper tape!

The only problem is, there is no PDP-10 in there. Rumor has it there is one in THX 1138, but I watched it and didn’t see one

Now we need a new site: “Computers mentioned in movies”

Not only that, ITS is also mentioned! Unfortunately that does not get it a starring role on the site.

I have tried to get in touch with the writer, John “Skip” Woods. Apparently there’s some controversy around the script, and a lawsuit was filed.

My favorite fictional computer sequence in a movie is actually a sound sequence: in the opening scene of Alien, where we see a monitor springing to life and the reflections in a space helmet. The sound is an interesting mix of noises that are actually somewhat appropriate (ASR 33 TeleType, etc, – you can identify them all), but in glaring technological contrast to the CRT screen in the visuals. Anyway, it’s a great piece of sound design. (I think, this has been slightly altered in the latest cut version that can be seen on TV today.)

I wouldn’t mind doing some programming with paper tape!

In 1980 (or '81) I had a summer job working in a local hospital while at uni. The first task was to update some code running on an Eliot 903 computer (c1966). This was the backup computer to the hospital ICL2900 to perform the calculations needed to print out tables of results from their blood analysis machine.

You were actually using the editor as intended!
Fun trivia: The “t” in “edt” is for “tape” as in “paper tape”. The idea behind it was that you would punch a correction tape on a Flexowriter, then feed it into the computer, merge it with the original source (using sed and the like) and repunch the result. If you’re using it for line-editing, you’re not using it right!

P.S.: Are you sure you didn’t miss a step involving a binary loader? (I have no idea, if this was required on an Eliot 903. Maybe, it was even included by the assembler, if there was a RIM mode available.)

I really can’t remember. I’m sure there was ROM that let it read a binary tape, but I don’t recall a 2-stage tape loading sequence. I only worked on it for a very short period of time - a few weeks as my ‘real’ job there was something completely different (a CAL package written in UCSD Pascal, but that’s a story for another day!) There are (working as far as I know) Eliot 903’s at TNMoC and the Cambridge Computing Museum, but they’re a bit far away from me right now.

After Space: 1999, I found UFO (1970), the prequel series. It has many different panels, most parts are from 60s IBM and later reused in several other series including Space: 1999 and Dr. Who. Not on the starringthecomputer site.
I like the green rotating thing. What is this?
Some selected caps, I took myself. 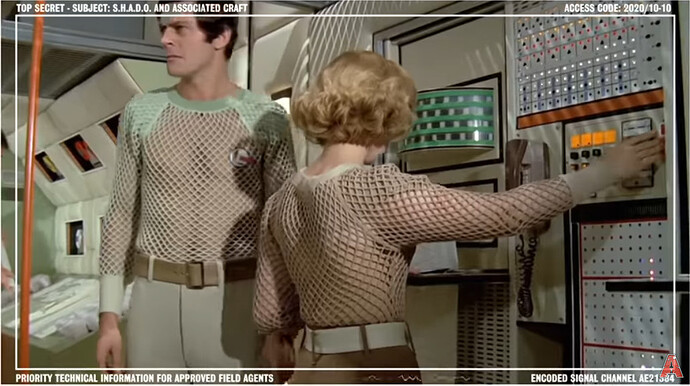 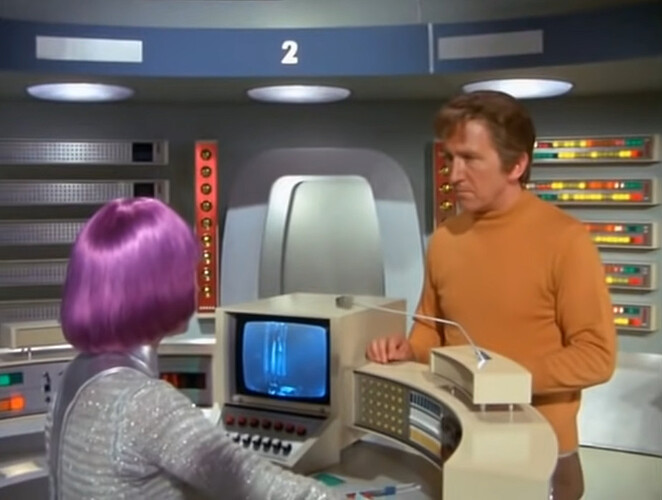 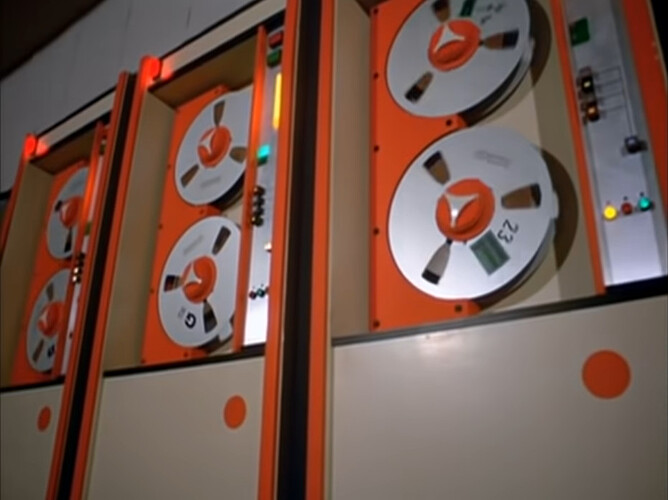 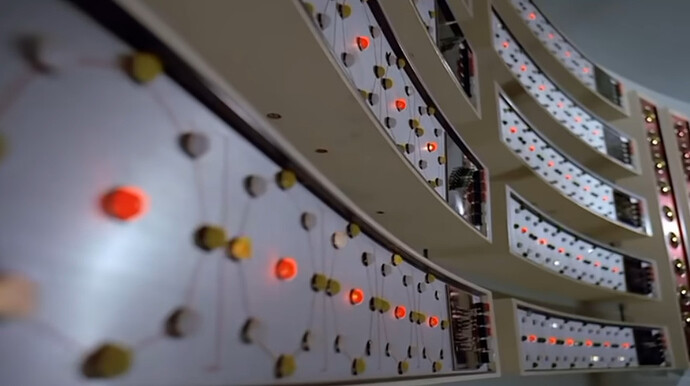 UFO was a great and stylish series! Notably, a computer featured sometimes as a character, an entire satellite called SID (not a sound chip, but the Space Intruder Detector). Its interior was all shiny circuit board aesthetics. (I guess, this must have been some real PCB layouts that were reused for the purpose.) 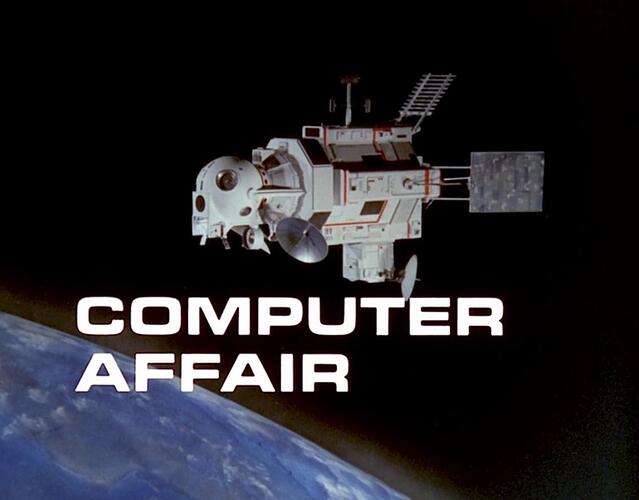 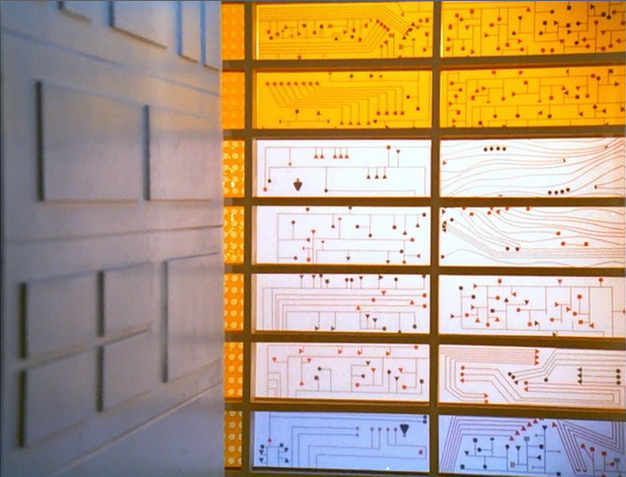