Ferret can now be run on modern systems, it seems - perhaps Windows or WINE. It’s a 1982 adventure in a post-apocalyptic world, and has perhaps only ever been completed by someone who was in at the beginning. Originally written in PL/I by some UK Data General people - who have remained anonymous.

For today’s selection we have a colossally large game which has been worked on at a steady clip for 40 years, yet it appears almost nobody has heard of it or played it. While Ferret is a 1982…

Resuscitation Chamber
This room contains a number of box-like machines. There is a door to the west. To the left of a display are three illuminated buttons, one red, one orange, one green. In the centre of the room, atop a metal plinth is a large chest. The lid of the chest is closed. Fixed to the side of the chest is a brass plaque. 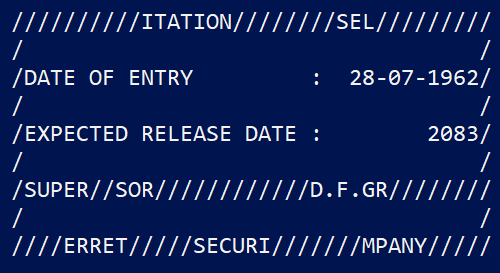 Edit: from a comment there, sounds like the author has unearthed and resurrected a number of obscure interactive fictions:

Quite often I find a reference while looking for something else. I think Explore (1979) was one of the most obvious recent examples: I was actually looking up a TRS-80 creation system called Explore, but one of the links that popped up seemed to imply there was actually a 1979 game called Explore, so I noted it down and dug deeper when time permitted.

For GROW, I think I first caught the reference in that Adven-10 article in Dr Dobbs, and so started poking around from there until I chanced upon an Apple II version on the Internet Archive.

For Spelunker, I was researching some other computer thing and chanced across what sounded like an adventure game on a cover of Byte.

For Bilingual Adventure, I was simply browsing 1979 magazines on the off chance of running across something interesting, and I saw the ad mention something I hadn’t heard of before.

For Adventure 448, I actually gave the full story explicitly there; I was curious and read a paragraph regarding the Zork telnet server and saw reference to a version of Adventure which didn’t sound familiar at all.

For Journey (1979) there was a research paper that mentioned an adventure I didn’t recognize so I looked up further information.

Some games are listed on specialty sites for particular platformers but nowhere else. City Adventure was only on Ira Goldklang’s; Gold was only at zx81stuff. I’ve gone through those and taken notes for cross reference later.