The EMUF pages are a tribute to the work of the editing staff of the german magazine MC Die Mikrocomputer-Zeitschrift on SBC’s.

EMUFs SBC’s are programmable systems, without a monitor program: write a program and store it in an EPROM and run the application type of system. A bit like the modern microcontrollers like the PIC and AVR IC’s and also a bit like the Arduino’s. But with the technology of the 80ties: 8 bit CPU’s like the 65XX and Z80, I/O IC and EPROM and some RAM.

The first EMUF was published in 1981 in the second edition of the magazine. Often used with just the name EMUF. It could better be called the 6504-EMUF, since the CPU is the MOS 6504, a stripped version of the 6502.

Interesting computer.
Weird is the Whiskey computer or game (depictured on EMUF Sonderheft 1).
The magazines are also on archive.org

I was intrigued… seems to be a drink dispenser, as an example I suppose of microprocessor controlled vending machine? 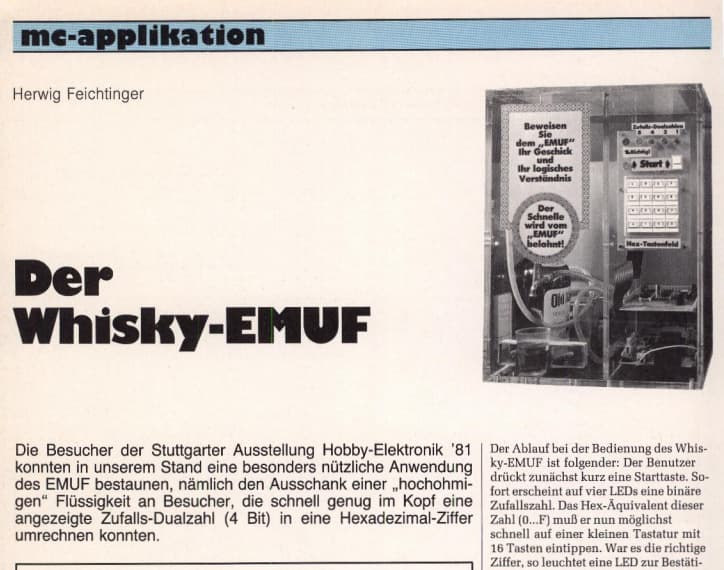 It also features as a sobriety test! The lead text reads,

The visitors of the Stuttgart exhibition Hobby-Electronics '81 found a particularly useful EMUF application in our booth, namely the serving of a “high-impedance” liquid to visitors who could convert a displayed random binary number (4 bit) into a hexadecimal digit quickly enough in their head.