A couple of interesting projects from Donn Stewart:

The original CPUville homebuilt processor of 2004 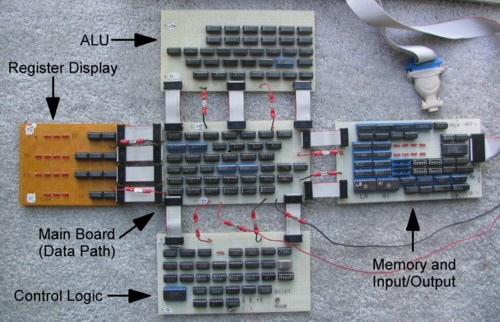 and ten years later, another one:
My Home-Built 8-bit TTL Computer Processor (CPU)

The original processor had a single instruction format (4-bit opcode, 12-bit operand), and a 16-bit memory width so I could fetch instructions in one step from a 16-bit wide memory. It had only a 12-bit memory space (4K words). The ALU was 12-bits wide, but because of that I was unable to load instructions over a serial interface as two 8-bit words – the processor could not assemble a 16-bit instruction from two 8-bit input bytes! I cobbled together a port that that would shift the first of two input bytes into the high-order byte of a 16-bit word, but it was a kludge. The processor worked, but it was far from elegant. It had a very small memory space, and an ALU that did not do subtract-with-borrow correctly.

(As posted just now over on anycpu)

Thanks for the mention. I’ve been making and loving the replicas since they came out (PiDP8, PiDP11, AltariDuino) but I must admit I really, really love playing with the ‘real deal’ instead of simulations. Somehow the Z80 just ‘feels right’ to me, having cut my teeth on the TRS80 line back in the early 80’s. I still have my TRS80 Model 4P and it still works.