I bought a Dell System 210 but it didn’t come with the PSU cables, and I have a few spare ( modern ) PSU cables with me( Voltage is in the same amount, but amps isn’t ) would they be able to be used?

Is it this system?

InfoWorld is targeted to Senior IT professionals. Content is segmented into Channels and Topic Centers. InfoWorld also celebrates people, companies, and projects.

If so, it’s probably an AT power supply, which is a sort-of standard that you can probably buy a replacement for. It is not the same as ATX (“modern” power supplies are ATX), although you can get adapters; the ATX power supply almost certainly will not mount cleanly in the case, but would power it for testing.

We would need more information to be more helpful.

You’re likely to find more help with a request such as this on a board like vogons that is dedicated to old PCs; there are a staggering number of specific PC configurations there in the various sections.

Yes, it is the model in the attached paper, I was referring to PSU cords ( it looked like you were talking about replacing the power supply instead of the cord ) Cause the cord is labeled as 15 amps instead of the 1.5 on the PSU

Sounds like you’re searching for the power lead which connects the back of the PC to the mains socket.

A picture would help a lot, whether on this forum or the vogons forum.

Here in the UK we often speak of these power leads as kettle leads. More technically we might say IEC. There are a number of standard forms for the connector: see perhaps

IEC 320 is an international standard for appliance couplers. Use this IEC 60320 (IEC 320) reference chart to identify a configuration by pin array or designation. IEC designations use the nomenclature "C" followed by and odd or even number.

But if you have a lead which fits, use it - one reason for the various connectors, AIUI, is to arrange that the lead won’t be overloaded by the load. If you supply a 1.5A load with a lead that is rated for 15A, you’re safe. (Unless the PC catches fire, but that’s another thing.) 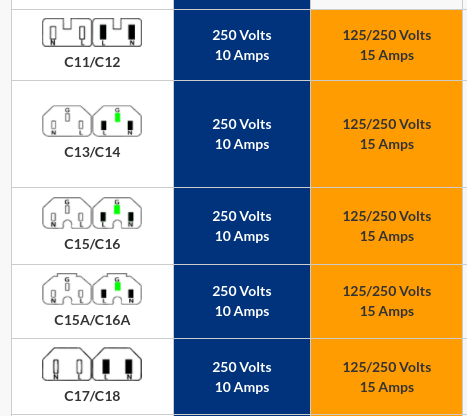 I’ll get some photos of what it says it needs on the back, and of the lead

Cause the cord is labeled as 15 amps instead of the 1.5 on the PSU

It is almost always OK for the cord to have a higher amperage value than the device; the reverse is not true.

If it’s a standard IEC computer power cord (probably C13 in the post that @EdS made), and it fits, you’re fine. Those have been standard on PC-compatible machines since the release of the IBM PC in 1981.

the cord is labeled as 15 amps instead of the 1.5 on the PSU

That’s fine: as long as the cord is rated for the same or higher current. I don’t think you’ll be able to find a 1½ A rated cable: it would be extremely thin and run rather warm.

The only non-rackmount computer I know of that uses a different IEC connector is the late model Apple G5 Dual/Quad. It used a C19 cable, more often seen on enterprise servers and UPS units. The two G5 towers I own draw fearsome amounts of power and I only run them if I need a space heater. 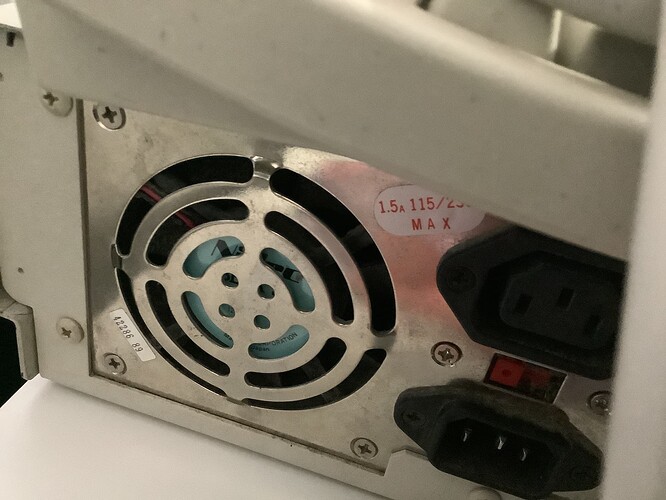 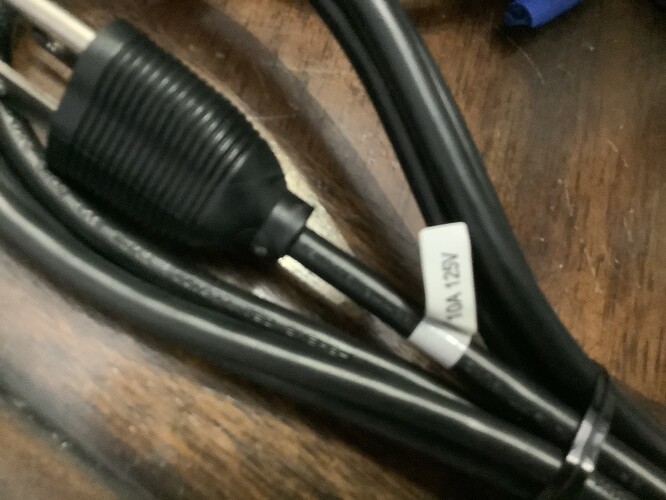 You’re good to go, plug it in.

Audiophile’s can sell you a $200 power cord if you wish.

Still keep a eye on what odd ball power cables are around.
Monitors seem to use thier own brand of cables today.

Ooh, the PSU has one of those monitor pass-through connections too. I remember thinking how neat it was to be able to power everything on with one switch …

I was interested in what’s common knowledge about electricity so I had a short, informal, but informative conversation with my significant other. Suffice it to say, I might assume too much. In normal domestic situations, I suspect it’s not commonly known that voltage is a given whereas current is a consequence. And so, whereas one should not usually connect something labelled 120V to something labelled 240V, the same isn’t true when the labels are 1.5A and 10A.

(In the UK one doesn’t normally come across different mains voltages, but low-voltage adapters with barrel jacks or similar do come in many voltages. Also many sizes, both polarities, and with the extra possibility of AC or DC.)

And when it comes to fuses and breakers, they are labelled in Amps, but it’s Watts that we usually have in mind, so that’s another trap for the unwary.

While it’s common to use hydraulic analogies for electric and electronic circuits, mechanical analogies may be helpful, as well, since we tend to be more familiar with these.
E.g., a transformer works much like a simple arrangement of gears: a smaller gear driving a bigger one with less velocity, but with greater force, and a bigger wheel driving a smaller one will result in more rotations, but at a weaker force. And we can work out the ratio by counting the cogs of the gears. A transformer works much the same with voltage (V) and current (A), but here it’s about the windings.

Similarly, using an analogy of pulling force and current (A): Can we hang something by a given rope from a certain hook, given the weight of our object and the rating of hook and rope? Well, our object weighs, say, 1 kg and the hook is guaranteed to support 1.5 kg, so this should be safe. The rope is rated for 15 kg, so this shouldn’t be an issue. (Here, the computer may draw about 1 A max, the power supply is guaranteed to deliver 1.5 A, and the cable is rated for 15 A.)

Before we go too deep… I notice two things.

First, the PSU in this case has a red slider switch - that will most likely be to select whether the mains voltage is 220V or 110V, or nearby numbers. In North America I think you’ll be using 110V, so set it accordingly.

Second, the 1.5A label is somewhat close to the power outlet, not the power inlet. Just possibly, it might be intended to tell us that this is the upper limit for the monitor’s needs, and is not describing the PC’s needs.

The label certainly looks like it is rating the monitor outlet. But wouldn’t this rather be a simple pass through? (As this is mains power, the monitor will have a PSU of its own.)

On the IBM PC it is indeed an almost direct pass through. Those daisy chain outlets are always significantly derated, though, and I’m not sure so of the reasons why. Part of it is that it obviously has to share its current load with the PC (but the PC’s current draw is only a couple of amps, itself). Part of it is that it probably only has 18 gauge wiring, but short 18 ga wires in free space are probably rated for about 10 times that (an 18 gauge IEC cord is 13 A). Part of it is that it’s often (and it is on the PC) switched directly by the computer power switch, which may not be rated for a high contact current, although a 10 A switch is not that expensive (and the IBM PC switch is quite a thing).

Those outlets are a great convenience on pizza box and desktop systems, particularly when there are no mains-powered peripherals involved.

Here in the UK we often speak of these power leads as kettle leads. More technically we might say IEC.

At my earliest place of full time employment (AU) we used to call them elephants, because they were typically long and grey. That will forever be wedged in my brain.

I know this ended up being about the IEC C15 power cord, but it made me wonder if something could be made similar to the Pico-ATX "PSU"s that are out there, but with the old XT/AT power connectors. That way of you have a vintage machine with a dead PSU you could use that to power it with a laptop power brick.