Some few interesting computers here. I already knew a computer in a book. But this Seiko computer with watch is weird.

Throughout the history of computing, computer manufacturers released quite a few oddities to the public. Take a look at some of the strangest computer design ideas.

Some real oddities there. There’s the kitchen computer too (which might have been a one-off marketing gimmick rather than a product) (As mentioned previously, as it turns out:
Before the iPad, There Was the Honeywell Kitchen Computer
)

Maybe not a bizarre oddity but I always wanted a computer in a folio like case.

The IBM ThinkPad TransNote is a notebook computer by IBM. The TransNote consists of a leather-like folio case which contains a computer on one side and a paper notebook on the other side. It has a 600MHz Pentium III, 10GiB HDD, CompactFlash dock and a PC Card slot. The battery pack uses flat Samsung 103450 cells.

Very wild… I can’t make it out from the images on the wikipedia page… but a linked page shows enough configurations for me to get a better idea: 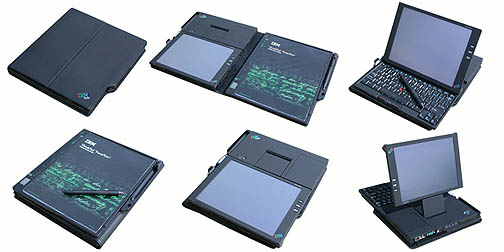 The notebook part of the 5.5 pound TransNote consists of a standard 8-1/2x11 paper notepad sitting on top of an electronic digitizer. A special pen lets you write on it just as if you wrote with a ballpoint pen on a regular notepad, which, in fact, is exactly what you’re doing. But the pen’s electronic signal is also captured by the digitizer and saved in the notepad electronics. The pad side also has its own menu controls that let you do things with the ink. This entire electronic pad part is called the “ThinkScribe.”

This is one of my ebay tragedies: there was once one listed in great shape, even with the original paper supply. Somehow, I wasn’t available and the auction went by without a bid from my side. There wasn’t much interest and it went for cheap, never saw one listed again. – Would have been fascinating to explore this a bit more thoroughly.