Youtube’s algorithm managed to hide some really nice videos from me for a few years, but it the end, the efforts were futile. So I evenually stumbled over what turned out to be channel of a collection located in Žatec in the Czech Republic. All these machines are beautifully restored and in working condition. A PET 2001 in exceptionally nice condition: And for some Eastern Block nostalgia (I really like those monitors/TVs – are these the same as the ones used for the AGAT?), TNS SC 1986 and TNS HC-08 from 1988, manufactured by the JZD AGROKOMBINÁT Slušovice (nice keyboard!): 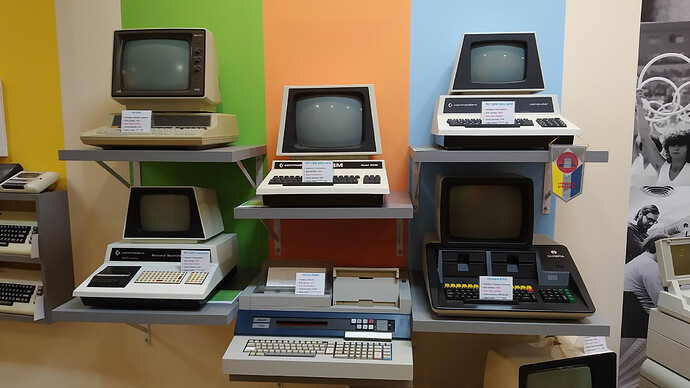 According to Google Translate:

Permanent exhibition of computers from the 70s and 80s of the last century. Computers under socialism in Czechoslovakia and in the world. We exhibit functional computers from HP, Datapoint, Olivetti, Tesla, Osborne, Commodore, Atari, ZX Spectrum, Robotron, Tesla, Epson, Sirius Victor, Sony, etc. In the restaurant U Zlatého beránka in Žatec you will see over 135 pieces of functional equipment in luxury condition. You will not see some of them in technical museums in the Czech Republic or in Europe, because they are unique rarities and cataloged computers.

Pavel Jambor’s private collection from the company OnlySoft.cz, which he lent to a social company for the needs of a permanent exhibition, is also suitable for educational purposes for school groups (acquaintance with the development of IT since the 1970s). It is possible to play computer games of the 80’s in three positions.

Apparently, the collection is open to visitors (check “O naší expozici” for location and opening hours). But you may also feast your eyes on various exhibits in this foto gallery.