As of a few weeks ago, I have held a Curta pepper-mill mechanical calculator in my hands. And heard it, and felt it, calculate. Marvellous! I don’t suppose I’ll ever own one.

And here’s how the mechanism works:

… I’m thinking there must be some converging series or iterative calculation which doesn’t need much state. Maybe

In mathematics, Viète's formula is the following infinite product of nested radicals representing the mathematical constant π: It is named after François Viète (1540–1603), who published it in 1593 in his work Variorum de rebus mathematicis responsorum, liber VIII. At the time Viète published his formula, methods for approximating π to (in principle) arbitrary accuracy had long been known. Viète's own method can be interpreted as a variation of an idea of Archimedes of approximating the length ...

Here’s a poster showing all the parts: 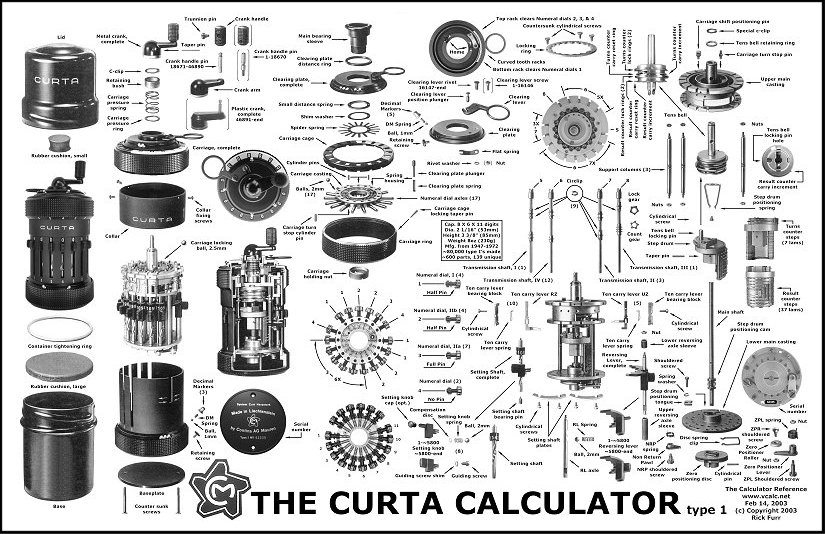 Oh, and it was popular with rally drivers too - or, perhaps, their co-drivers:

The popularity of the Curta among rally drivers was due to two salient facts: Herzstark’s invention was irrefutably accurate and, at the same time, tough enough to take the knocks of high-speed racing. So much so, that rally teams continued using their Curtas to measure times, speeds and distances into the 1980s, despite the emergence of modern pocket calculators. Racing drivers who swore by their cylindrical devices earned the memorable nickname of “Curta-crankers”.

Half a year ago, I had the chance to visit the (small) computer museum of the HTW Berlin (Hochschule für Technik und Wirtschaft, University of Applied Sciences). During the visit, one of the team members told a story about some uncle or something in USA, who owned a Curta. And while he was telling the story, he grabbed for something in his pants pockets. And suddenly, he had this uncles Curta in his hands