Feast your eyes on this 1953 creation, a 12-way Curta for matrix multiplication, built by the Department of Chemistry at the University of Birmingham: 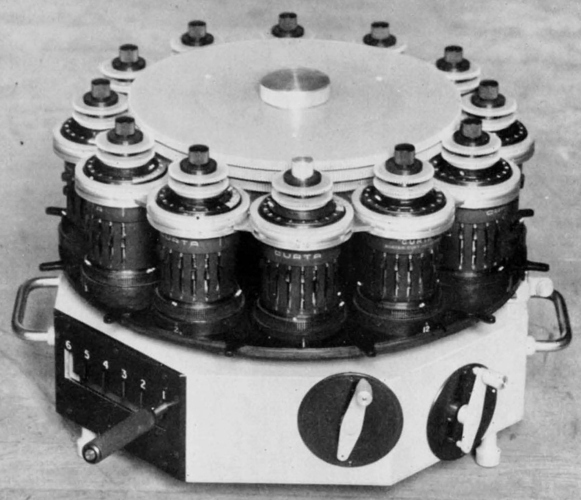 It turns out there were quite a few efforts to parallelise computation by ganging together Curta calculators. See for example this earlier article, again by Dr Bruderer, in Issue 75:
Multiple Curtas
which has the subsection “Double, four-fold and five-fold Curta” and a nice engineering drawing for a side-by-side double, by the Austrian inventor Curt Herzstark.

There’s a short paper worth reading here, again by Bruderer:
The world’s smallest mechanical parallel calculator. Discovery
of a 12-fold Curta made in Britain

The multiple Curta is not the world’s first mechanical parallel calculating machine. For example Brunsviga had manufactured duplex machines before. But, to my knowledge, it is the smallest such device.

There’s a drawing of an end-to-end or stacked double Curta in this paper:
The World’s Smallest Mechanical Parallel Calculator: Discovery of Original Drawings and Patent Documents from the 1950s in Switzerland
(“According to the patent application more than two devices may be piled up”)
In the same paper you’ll see the 4x and 5x drawings.

See, Google’s TPU isn’t as original as they say it is…