Crabs was written by Mark Manasse and me [Luca Cardelli] in November 1982 , and evolved in about two days to its present form. 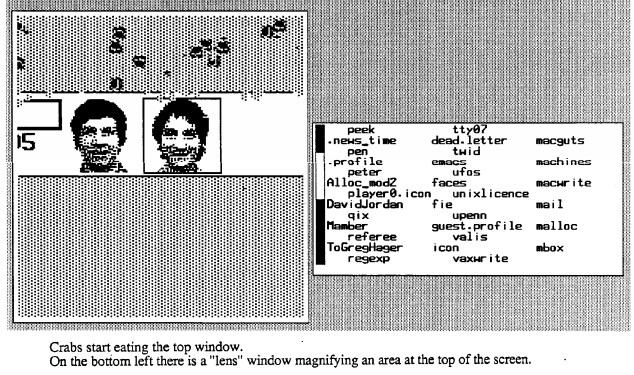 Crabs is a graphic demo which violates most of the assumptions underlying well-structured window systems. It illustrates both the raw power of bitmap graphics and the restrictions which are usually imposed on its usage.

In the next few days, unaware people were exposed to crabs in the comfort of their own terminal (“Let me show you something…”). The question would always come up: “How do you stop them?” “You can’t” “Yes, but how do you stop them?” Crabs could be downloaded remotely, on somebody else’s terminal, while he was working. They could be left dormant (Rob’s idea) during die lunch hour, to suddenly come up in the middle of the afternoon. They could be timed to start in the middle of an important demonstration. Once, Rob got them to eat (irrecoverably) part of a picture an artist was drawing on a Blit. The artist was offended, not by the damage picture, but by such inexplicable violation of what she considered to be laws of nature. Very soon, nobody could pass by Bell Labs without being exposed to crabs.