This post originates from a mere coincidence, namely a) @EdS’s recent post on the SCAMP and the IBM 5100 and b) a Rolling Stone Story featured on HN today.

Ad a) Closely connected to the 5100 is the most hilarious piece of computer folklore, namely the story of John Titor, a self proclaimed time travel agent, who appeared on some bulletin boards in 2000/2001. The IBM 5100 here plays the role of an elaborate MacGuffin, as the Titor posts exposed some of the then lesser known features of the machine, namely its PALM processor simulating other IBM CPUs in microcode in order to repurpose existing implementations of APL and BASIC. In the Titor story, the IBM 5100 features as some kind of universal computer to computer translator, mankind’s only hope of bringing up civilisation from the aftermath of the overflow of the 32-bit Unix timestamp.

I barely managed to withstand the urge to add this as a footnote to EdS’s post , when I stumbled upon

b) The Rolling Stone story “How UFO culture took over America” by Stephen Rodrick featured on HN (https://news.ycombinator.com/item?id=24451502).

Here it struck me: Is it true that there are no stories linking a computer to UFOs, as has been done with probably any technological artefact on the planet? Did I miss any? (Well, there are stories of UFOs allegedly playing with computerized Radar systems and launch codes on ICBM sites, but these are rather about the entire electronic system of a site and not so much about a particular computer.)

Also, are there any haunted computers?

What are known computer related X-Files stories?
(Are computer actually that uninspiring that there should be none at all? – I mean, the industrial revolution had ghost trains, so where are the haunting DOS prompts appearing from the midst of nowhere on a foggy Park Avenue?)

P.S.: There’s the story of a haunted Ms Pac-Man cabinet, which was once auctioned with this attribute on eBay, but I’m not sure, if this does count as a computer. Moreover, this seems to have been linked more to the cabinet than to the electronics inside.

I remember the John Titor saga from my early internet days. A very good prank, and a surprisingly suspenseful storytelling.

Turns out, there’s at least one haunted computer, a Apple MacBook auctioned as such on eBay in 2007. As reported by such trustworthy sources as Business Insider and the Daily Mirror: 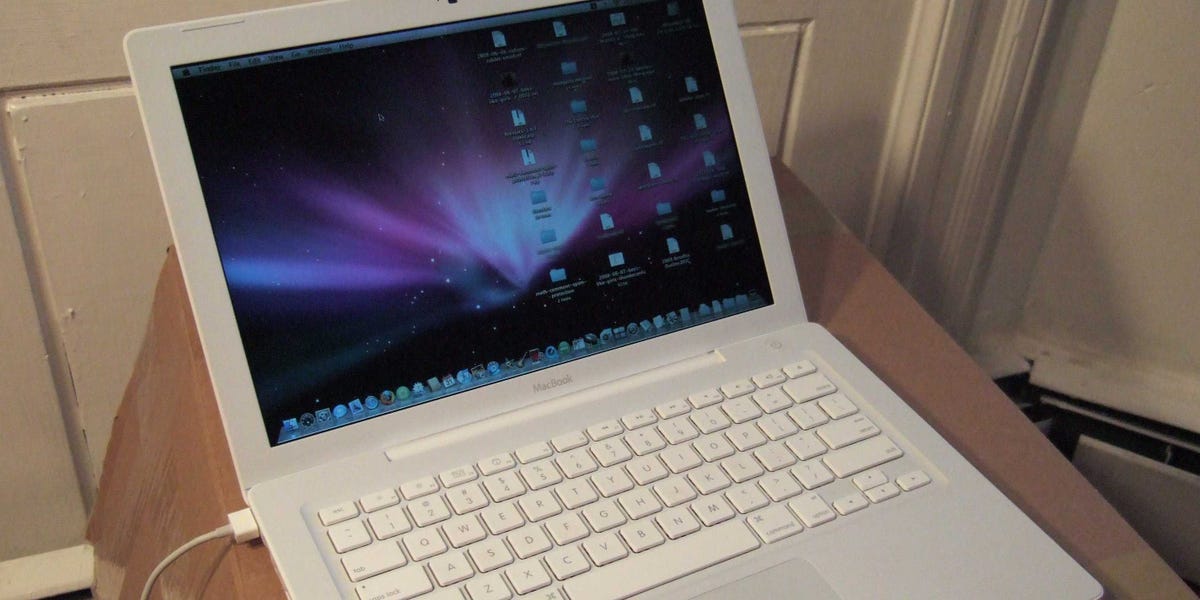 A 'haunted' laptop that has been 'levitating and displaying creepy wallpaper...

The computer has apparently been levitating, opening and shutting on its own, and displaying creepy wallpaper images. 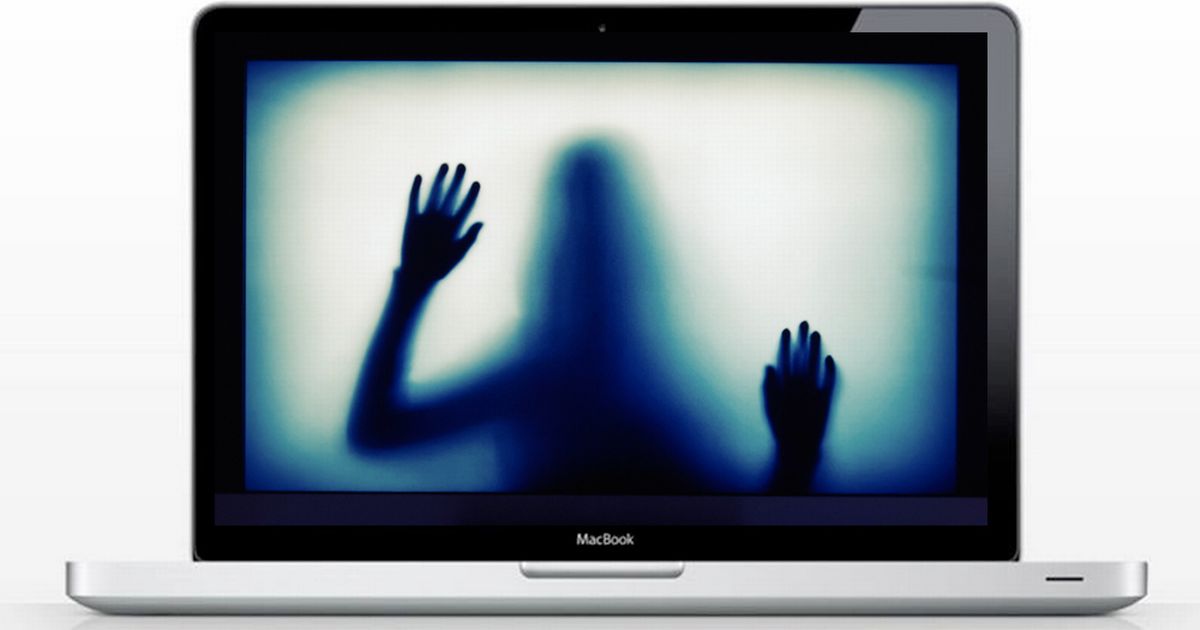 Man puts HAUNTED Apple MacBook up for sale on Ebay

The Daily Mirror story reveals a rather peculiar trait of the haunted machine: while changing wallpapers and other visual imagery, it otherwise refused to communicate via its display and rather resorted to handwritten (er, clam-shell written) messages.

He also described how the ghoulish computer managed to make direct contact - communicating chilling handwritten messages from beyond the grave.

“The way he communicates with us,” he says, "is by grasping a pen between the keyboard and monitor and writing on pieces of printer paper from our home office.

I guess, there must be reasons, why ghoulish computers avoid electronic communication… who should know better than them?

Apparently, Apple machines are especially good at channeling the supernatural. (Must be the intuitive UI, I guess, especially, since there is no reporting on similar cases after Jony Ive took over. Notably, the 2008 MacPro starring in this story runs versions of Mac OS from the Scott Forstall / pre-Ive era only.) Anyway, there was a 2008 MacPro auctioned in New Zealand, which exposed its uncanny state by dying over and over again, but coming back to life eventually every time (“at slightly worse condition than before”). If you’re now thinking of a faulty power supply or a bad solder joint, there’s more to it:

The owner insists that: “The devil doll or the skeletons in the picture just appeared after the computer summoned them from the world of the undead”. The computer has died over 50 times - but it always comes back to life.

There is this 1997 post in alt.folklore.computers that explains the x86 as being reversed engineered from an UFO.

There is this 1997 post in alt.folklore.computers that explains the x86 as being reversed engineered from an UFO.

I was hoping much for such a thing! However,

“By the mid 1980’s, the funding for continuing the reconstruction of the
Roswell OS dried up, and the programmers from that project had to look
elsewhere for work. Some of these programmers were snapped up by
Microsoft for work on the system that eventually was named Windows 95.”

More seriously, this is quite an interesting post, since it actually criticizes the allegedly alien design decisions, by this significantly diverging from the usual story telling of the genre.
(I also love the idea that Unix just escaped a similar fate by a narrow margin, because high-resolution microscopy suitable for reverse engineering the alien chips wasn’t available, yet.)

This thread is a bit old, so hopefully reviving a zombie thread isn’t a no-no, BUT I was searching, out of curiosity, to see if anyone had posted on here about the legendary IBM 5100, and found this post, referencing the whole John Titor saga, no less!

Not sure if anyone is into anime here or not, but if so, I highly recommend watching Steins;Gate. It’s about time travel, parallel dimensions, and the role that the nefarious “SERN” plays in all of it (obviously a play on CERN). The characters must obtain an “IBN 5100” to hack into SERN’s database to figure out their secrets of time travel. John Titor is, of course, heavily integrated into the plot (and is actually a character on the show). It’s very cerebral and the storytelling is top notch! And because I’m such a huge nerd and fan of the show, I’ve looked into getting a 5100 for myself as a collector’s item, until I realized one in good condition costs more than my car! 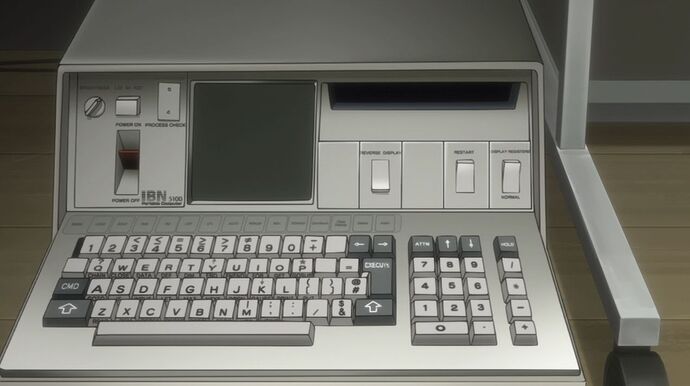 But yeah, check it out if you are so inclined, it’s excellent!

And speaking of The X-Files, I just finished watching the original 9 seasons (again…for like the 5th time) and have just started the new ones. It’s funny going back and watching it now that I work in tech, and seeing all the old laptops/desktops/etc. that are used on the show. The absolute brick of a mobile phone in the episode “Unusual Suspects” that Mulder uses is especially hilarious, compared to modern smart phones.

The absolute brick of a mobile phone in the episode “Unusual Suspects” that Mulder uses is especially hilarious, compared to modern smart phones.

On the other hand, I’ve a replica of the British 1960s/1970s trimphone (Telephone No 712) on my desk, which is smaller than most modern smartphones, footprint-wise (rotary dial included, which is in my case just a circle of buttons).