I just read that Turbo Tape could load/save at a rate of 475 bytes/sec. Is that accurate? Assuming this is accurate, I sure wish I had known about it back in the day.

Like everyone else I knew, I had a 1541 floppy drive. But I was the only one I knew who had a cassette drive. Once I got the floppy drive, I never used the Datasette again. But if only I knew about stuff like Turbo Tape? A sixty minute tape could store as much as 5 double sided floppies? I would have backed up so much data!

And I mean actual backups of data I care about. Not … you know … “backups”.

Floppy disks were not that cheap, but cassette tapes were pretty cheap. I would have been able to triplicate my files that I cared about - floppy plus two independent copies on tapes - rather than just risk it (and lose a lot of them).

I’m just kicking myself for having had this option to have saved all my data and various programs I wrote, if only I knew.

For background, there’s an article from Feb 1985 issue of Compute! magazine here:
How Turbotape Works

The intro article from the previous month, by Harrie De Ceukelaire is here:
High-Speed Tape Utility For Commodore 64 And VIC-20

It looks like it was a free type-in for VIC20 and C64. All you needed was a copy of Compute! Here’s your type-in listing: 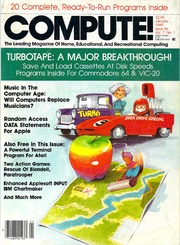 Thanks for the reference! Compute magazine was popular here in the USA, and one of the computer magazines that I browsed often. A lot of significant software was type-ins from Compute, including the popular word processor SpeedScript.

So, it’s definitely something I could have run across and taken notice of, if only …

As someone who didn’t have access to a disk drive until much later, I’d say you didn’t miss much. I had an Amstrad CPC464, and while it had much faster tape saving than the C64, attempts to speed up the tape loading beyond the standard 1000 / 2000 baud were often unreliable.You certainly couldn’t expect a tape you’d written at very high speed to load on someone else’s tape deck. You also needed to spend far too much time fiddling with tape head azimuth, head cleaning and using high quality tapes.

I do remember making a custom tape of Chuckie Egg that would load in 15 seconds: a short loader program, then a blast of headerless data as fast as would reliably load. The commercial tape in stock (slow) Amstrad format took 2 minutes 15. When I finally got a disk drive, I was pleased to find out that it would load the game in 9 seconds, so my fast tape was pretty good.

From what I’ve read, Turbo Tape seemed pretty reliable. Perhaps it could manage to reliably go faster than 2000 baud thanks to its use of digital recording instead of analog recording. Other cassette tape systems worked like a modem which converts between digital and analog tone signals. But the Commodore Datasettes were gutted of the normal analog signal processing circuitry in order to directly record/read binary on/off.

I think I can see a clear difference in priorities: the original Commodore format saves a program twice, the Turbo format saves it once with only a single byte checksum as an integrity check.

The original Commodore format was also for a 4K PET2001, so it’s not like these choices would increase load times much. And we’re talking 1977 cassette tapes; the quality of average tapes in 1985 could have been a lot better.

But seriously, the VERIFY function on the Commodore machines is the big win: check that the tape content matches the memory content, non-destructively.

It’s noteworthy that tapes were thought of as practical storage even for business purposes - it really matters that what you’ve saved is going to read back OK.