Not really Retro as these are implementations of BBC Basic

The BBC BASIC Console Mode editions are advanced cross-platform implementations of BBC BASIC for Windows (64-bit), Linux (x86, 64-bit), Mac OS-X (64-bit) and Raspberry Pi (Raspbian, 32-bit). They do not support sound or graphics but otherwise are highly compatible with BBC BASIC for Windows and BBC BASIC for SDL 2.0 . They share with those dialects many new and advanced features including data structures, PRIVATE variables, an EXIT statment, long strings, timer interrupts, an address-of operator, byte variables, a line continuation character, indirect procedure and function calls and improved numeric accuracy. Up to 256 Megabytes of memory is provided for the user’s program, data and stack.

The Console Mode editions take their input from stdin and send their output to stdout so may be run at a regular command prompt or in a client-server context (e.g. through a network or serial connection, or even via the internet). The console/terminal is assumed to be VT-100 compatible, which the great majority are, in which case most of the standard BBC BASIC VDU commands behave as expected (with the exception of graphics commands), although text viewports are not supported. Alternatively these editions may be used in CGI (Common Gateway Interface) applications, or as a shell replacement. Common shell commands may be accessed by prefixing them with a star (*), in the usual BBC BASIC way.

Possibly more retro than the above but in response to a challenge from a friend, I recently got BBC Basic (That’s the original BBC Basic that ran on the 6502 based BBC Micro) going on a real serial terminal on my retro style SBC… Little video here for your interest:

It was only the first few minutes where I demo’d BBC Basic - the rest was really about the BCPL system it runs, but still some good fun!

BBC Basic certainly fits my retro criteria: a 1981 dialect of a 1964 language, which just so happens still to be actively developed. The console edition is surprisingly capable, given a suitable console. There’s chess, and a snake game: 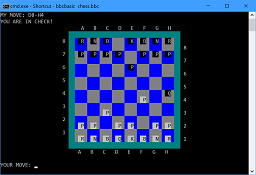 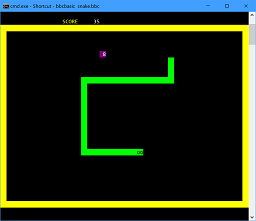 and for those more computationally inclined, an 8 queens solver and a Tower of Hanoi demo.

These console editions are a subsetting of the relatively recent, and also free and open source, SDL editions, which offer an IDE and rather impressive graphics capabilities: and still backward compatible with the 1981 Basic’s graphics, albeit drawn at much higher resolutions.

There’s also a BBC Basic inside RISC OS, which you can run on your Raspberry Pi, your ARM-based retro computer, or in emulation. There’s a kind of console-mode edition which boots to Basic here which I run in Wine on macOS - it’s console mode but has graphics. (RISC OS is also open source these days.)

There’s also Matrix Brandy, another implementation of BBC Basic IV, as shipped by Acorn back in the day.