With a bit of spare time on my hands, I have started to clear out my shed and tidy up the garden.

This afternoon, hidden in a dilapidated cardboard box, in the passageway behind the shed, underneath a load of brambles and rotten leaves, I found my trusty MPF-1 - something that I thought had gotten tossed more than 10 years ago, along with my Jupiter Ace.

I bought the MPF-1 in the Autumn term of my second year at college in 1984, on a weekend trip to Edinburgh. It was the extended version with an extra Z80 PIO, CTC and Tiny BASIC ROM. It was in an end of line sale at an electronics shop that I had attended as a kid in the mid-1970s when I was at primary school in Edinburgh. I think I paid about £75 for it - which was more than 10 day’s of student grant.

The Micro-Professor MPF-I, introduced in 1981 by Multitech (which, in 1987, changed its name to Acer), was the first branded computer product from Multitech and probably one of the world's longest selling computers. The MPF-I, specifically designed to teach the fundamentals of machine code and assembly language, is a simple and easy to use training system for the Zilog Z80 microprocessor. The MPF-I does not look like a typical Microcomputer. It is enclosed in a vacuum formed plastic book case ...

The following photos are exactly as I unearthed it - I now have a restoration project on my hands.

I will leave it overnight to allow the spiders and slug to vacate the premises and then give it a good wash in fresh water.

In the breadboard area I have vero-wired an extra HM62256 32K RAM and what appears to be a socket for another 8255.

The MPF-1 manuals are available on line http://electrickery.xs4all.nl/comp/mpf1/doc/index.html 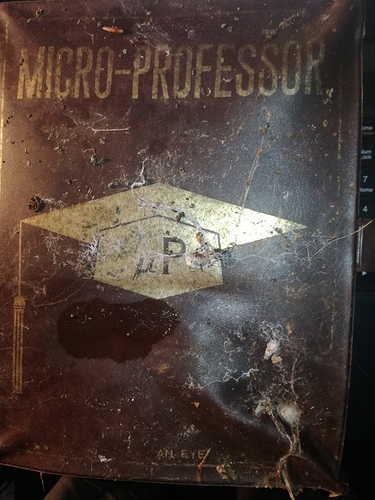 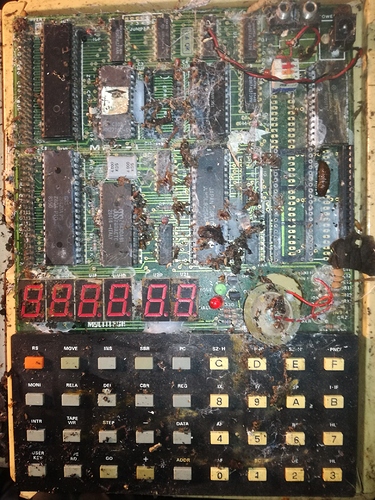 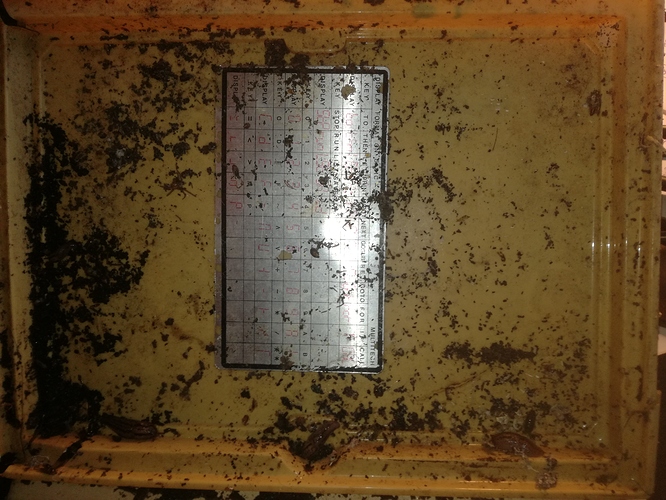 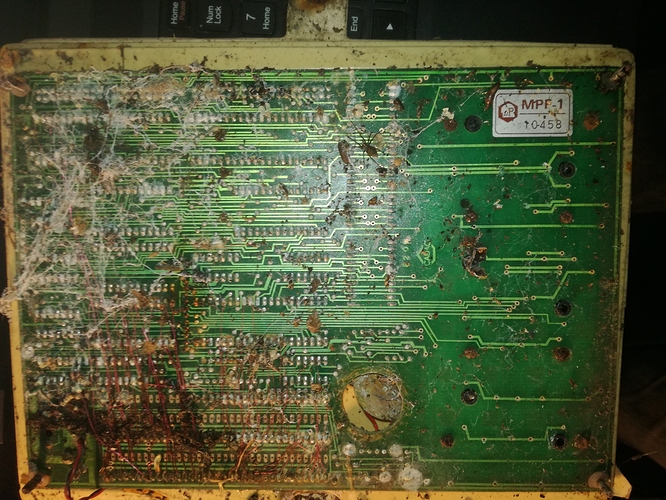 Nice re-discovery. It wouldn’t surprise me if you can get it going again…

It was in an end of line sale at an electronics shop that I had attended as a kid in the mid-1970s when I was at primary school in Edinburgh. I

Browns electronics of George IV bridge by any chance? I used to frequent that myself round about then…

Yes Gordon - it was Brown’s.

It was on my way from George Heriots School to the bus station at St Andrews Square.

Although I left Edinburgh & Scotland in '76 - I often went back there.

IIRC - I built an 8-bit ADC-DAC board for the MPF-1 and experimented with basic echo effects on 8kHz sampled audio data stored in the additional 32K RAM.

I found one of those recently - I’ll find a photo of it.

Here’s my custom Z80 board from about 32 years ago.

Z80A, EPROM and RAM Still present. CTC and SIO were down the right hand side of the board and the PIOs occupied the green sockets at the bottom.

The PIOs SIO and CTC connected via 0.1" female SIL headers on the underside of the board - predating the arduino format by approximately 17 years… 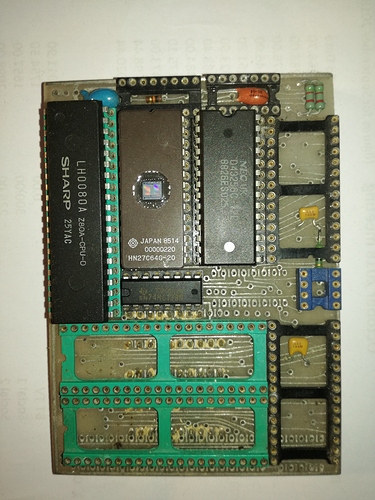 Rinsed the detritus off the MPF-1 pcb in warm water and rinsed several times.

Dried off the excess with a hair dryer and reseated all the socketed chips.

Discovered that the crystal had been replaced with a 4MHz part at some point and that one of the wires to the crystal had a bad soldered joint, which was quickly fixed with a hot iron and decent solder.

Confirmed that there was a good clean 2MHz clock reaching pin 6 of the Z80 cpu.

Not much other activity on the cpu bus - so swapped out the cpu for an unused one from my parts bin.

Some activity on the HALT light, and pressing any key corresponded with a slowing down of the multiplexing of the LEDs.

Removed the extra PIO, CTC and expansion RAM I had fitted.

Vaguely could make out on the display SYS-SP - but the display was very dim - possibly the drivers. Turned the lights out to get better contrast and sure enough the unit was running the uPF-1 monitor code.

Reseated the RAM and EPROM in case I had a bad contact between the sockets and the pins - and the unit sprang into life, allowing me to view the contents of RAM and ROM.

For something that has been outside under a hedge for 12 years - this is little short of a miracle.

Now to try to remember all those Z80 opcodes that I learned in Hex back in 1983 - 84, thinking that they might be useful one day. 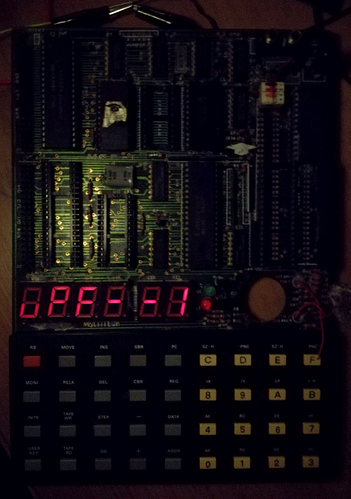 That’s fantastic! Well done for finding it and having a go.

It was like meeting an old friend for the first time in years.

I had a huge clear out some years ago and I had always assumed that my MPF-1 was a victim of that clearance.

Coming across it under a hedge behind my shed was nothing short of amazing. It was in a box full of random cruft, which probably didn’t quite make it to the dump.

The MPF-1 was a very popular trainer back in the day - and a well documented manual with full schematics and hardware description, was unusual at that time.

Flite Electronics in Southampton bought the rights from Multitech (now Acer) - and I believe that it might still be in production after almost 40 years.

Reading the manual and following the schematics put you in a position to actually create your own Z80 hardware - which I did on a number of occasions.

The other neat thing about the MPF-1 is that it exposed the full Z80 bus on a 2x20 pin header located next to the CPU. It had the same pin-out as the Z80 - so with a 40 way ribbon jumper and a suitable 40 pin DIL plug - you could jumpstart and exercise new hardware by driving it from the MPF-1 - as a “life support system”

The MPF-1 had a 165 baud cassette interface, but I think I used to use a battery backed RAM module for convenience.

I have pulled all the socketed chips, and it’s now going to spend a few days in the airing cupboard, to allow the socket contacts to thoroughly dry out. I think I still have some issues with poor pin contacts.

As my eyesight gets worse with advancing age - it’s good to get back to these simple systems - all based on components that you can see - and the good old 0.1" DIL devices.

Well done for the resurrection!