Art Sobel on the history of ARM (and further notes)

I rediscovered this classic from 1994, in two parts:

in which we are reminded that the 80’s were not quite finished at the time Acorn brought out the 32 bit Archimedes A310, running at 8MHz and with BBC Basic V. Art - who worked at NeXT - notes:

Only a few years later and you could fit a 25MHz upgrade… image from Retro Kit’s A310 page: 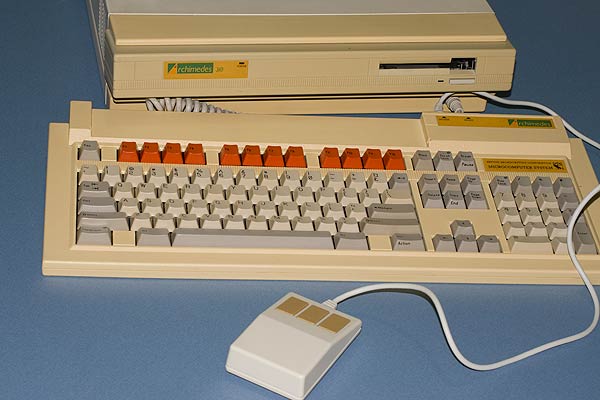 Apple had been persuaded to try an ARM project to replace the obsolete Apple II, code named the Mobius. The result was very impressive. Not only was the ARM based computer prototype able to emulate the 6502 and 65C816 processors, it even ran Macintosh software faster than the 68000 could.

I did try to draw up a history of ARM’s licensees - I’m sure I read somewhere that Robin Saxby aimed to double the fee with each new licensee signed. In SemiWiki’s Brief History we read:

Unfortunately, the Newton was not a great success and so Robin Saxby, ARM’s CEO, decided to grow the business by pursuing what we now call and IP business model, which was rather unusual at the time. This was still at the stage that a microprocessor was a whole chip, before it was small enough to just form part of an system-on-chip.

The ARM processor was licensed to many semiconductor companies for an upfront license fee and then royalties on production silicon. This effectively incentivised ARM to help its partner get to high volume shipments as quickly as possible.

So, VLSI Technology was the zeroth, and Apple was the first licensee (and both also shareholders) and GEC-Plessey were the second, in Jan 1992:

Within six months of signing the deal, GEC Plessey was turning out ARM chips for the award-winning Acorn Series 310/320 computer range.

ARM had narrowly escaped running out of money when it sold a license to Plessey Semiconductors which had been taken over by GEC. “We concluded the deal in July then it took until January for GEC head office to approve it”, remembers Saxby, “it could have happened so late that we’d have run out of money”.

Sharp and TI came shortly after, then Cirrus Logic:

in 1991, ARM signed VLSI as its initial licensee. One year later, Sharp and GEC Plessey entered into licensing agreements, with Texas Instruments and Cirrus Logic following suit in 1993

Hmm, no mention of Apple there! Perhaps because they were customers not manufacturers? A different kind of licensee.

In '94, ARM picked up Asahi Kasei Microsystems and Samsung.

In '95, to fix code density and win Nokia business, ARM introduced Thumb. And in the same year, DEC made the first StrongARM, as the first architectural licensee - licensed to make their own ARM-compliant CPUs.

In '96 you could buy an Acorn RISC PC with a StrongARM and run BBC Basic from cache:

Acorn’s 1996 launch of a 200MHz StrongARM CPU card came as a much needed boost to the reputation of Acorn. The 200MHz clock rate was ahead of comparable Pentium 1 systems available at the time.

The performance was roughly five times that of the 40MHz ARM710, Acorn’s previous fastest machine. For some BASIC tasks the gain was even greater, due to the BASIC interpreter fitting inside the StrongARM’s larger on-processor cache.

Strong ARM: The Acorn Archimedes is 25

Here’s the Science Museum with a brief overview:

in 1991, ARM signed VLSI as its initial licensee. One year later, Sharp and GEC Plessey entered into licensing agreements, with Texas Instruments and Cirrus Logic following suit in 1993

Hmm, no mention of Apple there! Perhaps because they were customers not manufacturers? A different kind of licensee.

Clients don’t need any kind of license. I would just buy chips from VLSI or Cirrus Logic, for example, without any relationship with ARM.

But some clients were more special than others. In particular, Acorn and Apple were both clients of and owner of ARM. So for the first years their needs drove the development direction of ARM.