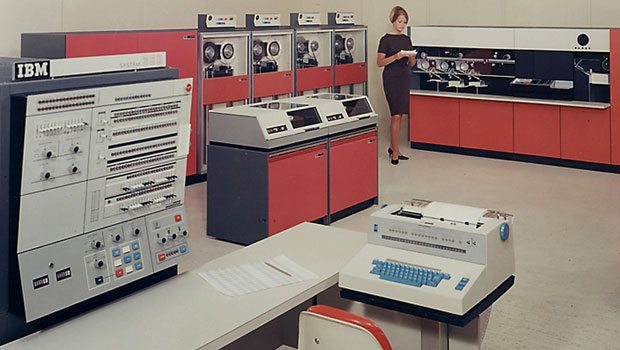 (Image: IBM, https://www.ibm.com/ibm/history/ibm100/us/en/icons/system360/impacts/ – I love this product design by Eliot Noyes and how it managed to shape the form of precision!)

IBM Board Chairman Thomas J. Watson Jr. called the event the most important product announcement in the company’s history.

The new equipment is known as the IBM System/360.

It combines microelectronic technology, which makes possible operating speeds measured in billionths of a second, with significant advances in the concepts of computer organization.

At a press conference at the company’s Poughkeepsie facilities, Mr. Watson said:

“System/360 represents a sharp departure from concepts of the past in designing and building computers. It is the product of an international effort in IBM’s laboratories and plants and is the first time IBM has redesigned the basic internal architecture of its computers in a decade. The result will be more computer productivity at lower cost than ever before. This is the beginning of a new generation - - not only of computers - - but of their application in business, science and government.”

More than 100,000 businessmen in 165 American cities today attended meetings at which System/360 was announced.

The full annoncement can be read at the IBM site, here:

There’s also a HN-discussion on this – and some interesting posts may show up there:

Nice post! Not wanting to devalue it, but here’s a previously:

IBM’s $5 billion gamble - the System/360. A whole family of machines. Here’s a particularly impressive console, of a 360/91 in NASA’s Goddard Space Flight Center: [image] (From wikimedia) Some nice anecdotes here about working with a model 67: This is the front panel and operator console of one of the CPUs. As you can see, IBM went nuts on incandescent lights for the various machine registers, but the only one that really mattered was the WAIT light, which lit when the machine wasn’t doing…

(I found that post by searching Google - fourth result for [ibm billion dollar gamble] - which is gratifying for us all here!)

It’s not a devaluation, but a natural completion!

Regarding “a whole family of machines,” what I do admire in Eliot Noyes’ work is that it spun over what became an enormous range of equipment, designed and built at various subsidies, and still managed to maintain an impressive level of consistency and a distinct design language. And Eliot Noyes, as the consulting director of design operating his own firm, Eliot Noyes and Associates, didn’t even have in-house authority. It may have been the product design job of the century. (Just my musing, though.)

Something turned up in the HN discussion, I didn’t know: a System/360 web emulation by Ken Shirriff:

The display for the micro-instructions is great!

There’s also a dedicated blog entry describing the machine (a 360/50) and the emulator:

Simulating the IBM 360/50 mainframe from its microcode

PS: We had this previously, but, apparently, I somehow skipped this.