An odd machine all round - battery backed RAM, but only 64k in the base model expandable to 512k. 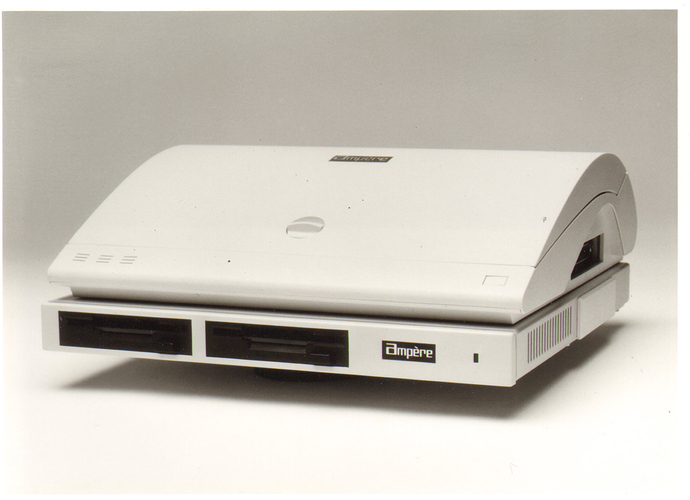 Ampere’s WS-1 laptop was an oddball, but a cute oddball. When closed, its clamshell design resembled the wing of an airplane. Its case was designed by Kumeo Tamura, who also designed the Datsun 280… 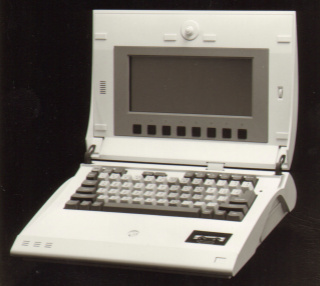 Its case was designed by Kumeo Tamura, who also designed the Datsun 280Z sportscar. The 68000 CPU and VMEbus were unusual for a laptop at the time, and the WS-1 featured an obscure multitasking operating system called BIG.DOS. Instead of bundling BASIC as the standard programming language, the WS-1 has APL.68000, a variant of APL. The machine was called the BIG.APL in early references.

The machine features about 13 mins into a 1985 Computer Chronicles episode which focuses on Japan.

At old-computers we learn that it failed FCC compliance in the US so was restricted to Japan.

Another page on the machine tells us it weighs 9 pounds and has a 300bps modem.

I’m not entirely sure whether the machine isn’t running a Forth underneath the APL. Probably not, but it was suggested.

I then fell down an APL rabbit hole…

From THE IMPACT OF MICROCOMPUTERS ON APL by Philip A. Van Cleave who might well be responsible for APL on the WS-1 as well as on Amiga Atari and Mac. (I say that because I saw this “APL.68000 for Amiga, Atari ST, Mac, original version by Phil Van Cleave”)

And for completeness, I found this video on (simple, exhaustive) solvers for Sudoku using APL and Forth, two great tastes that taste great together:

The best thing about this is that it’s yet another example of when folks made machines to fits some niche. Even though we were moving beyond custom CPUs for custom applications (ala Lisp Machines et al), we weren’t close to the generic “white box” running Windows or Unix and then layering everything on to that.

A halcyon time of diversity when computers were actually interesting for something besides raw performance numbers.

Indeed, the point of this forum is to celebrate the diverse history of computers - I’m glad so many have found this place to share their joy.

I’d be delighted to see threads celebrating Lisp machines or custom CPUs made for some special purpose. Or any other machines which people find interesting for some reason - which might be technical, historical, or personal.