At the ABUG meetup last weekend, I was able to investigate the hardware and software of a Communicator kindly loaned by @RObC. It’s interesting, and quirky, and packed with RAM, but was a failure in the market. Here are some photos of the ‘briefcase’ model and also of the one I opened up:

I’m not sure of the evolution of thinking within Acorn, but the Communicator came out after the success of the BBC Micro but before the 32-bit Archimedes. It would have been a time when IBM’s PC architecture was showing the scope of the business market.

There’s a ‘preview’ of the machine from Practical Computing, Jan 1986: 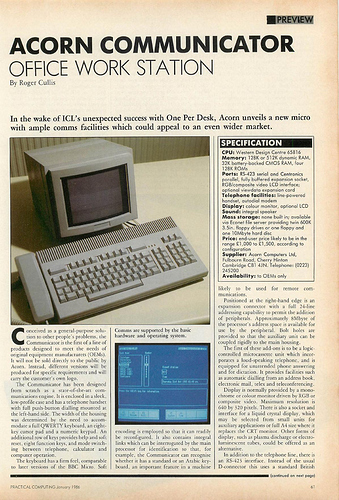 Here’s a summary of my observations of the machine I had:

A couple of relevant forum threads:
Acorn’s multi-tasking 65816-based Communicator
Anyone got Communicator system software? (Basic has 65816 assembler)

This seems oddly aligned to some of the thinking at Apple at the time: As for telecom integration, both appealing to office as to advanced home users, compare Apple’s prototypes for the AT&T Macintosh, also, the interface looks much like what must have been envisioned for the Lisa, when it was conceived for a soft function key interface. It seems to have been right at an epicenter, which vanished rather with a whimper than a loud bang.
Also, the BBC Micro still had a place in this universe, thanks to Econet!