Acorn in the USA

As I understand it, Acorn rather overspent their limited resources trying to crack the US market - a big market, but a different market to the UK. They were also wrong-footed by the extra cost of RF shielding. Quite a number of US-model BBC Micros came back over the Atlantic to be sold closer to home. 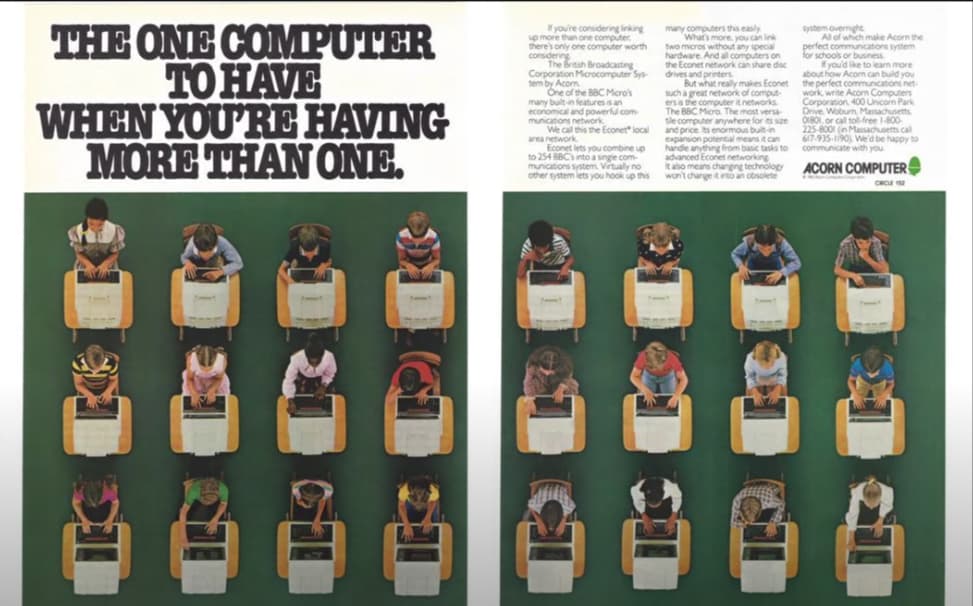 I thought the advertising was an interesting angle. In the UK, Acorn were obliged not to associate their name with the BBC Micro project - but not so elsewhere. (The advert above is a capture from this video: (“The Birth of Sim Racing - REVS”).) 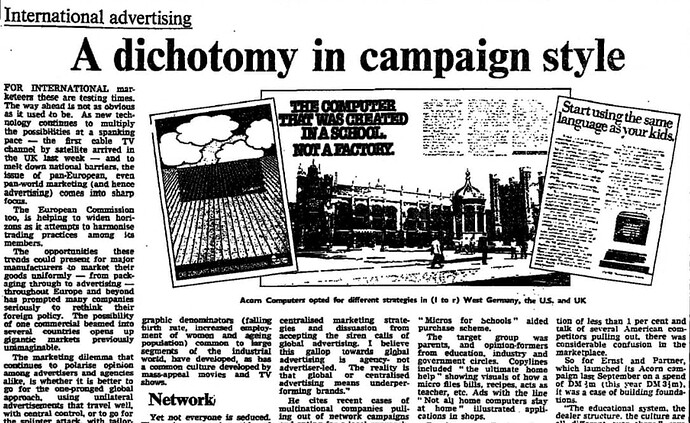 According to this 1984 piece in the FT, not all companies appreciated differences in culture. Apple, for example, ran their US ad copy in the UK, and failed to get a strong position.

“The one computer to have when you’re having more than one” is apparently a callback to a US beer slogan.

“The computer that was created in a school. Not a factory.” comes with a nice picture of a Cambridge college. Very aspirational, but does it resonate?

The article also mentions Acorn’s US lines: “The ultimate home help” and “Not all home computers stay at home.”

At the time of the article, £3m had been spent on the campaign, and “Acorn reached its one year sales target after only nine months” so the glorious failure hadn’t yet come to pass.

(There’s a great collection of adverts here, but only for the UK.)

There is some detail on the entire process of the US attempt in one of the longer Hermann Hauser interviews on YT.

“The computer that was created in a school. Not a factory.” – I’m not too sure, as well. Esp. given that the PC was meant to replace the various PDPs in control applications. Was this an attempt to turn a weakness into a strength? Pointing at the variety of ports and the connectivity of the Beeb may have been a stronger move.

A bit about the US adventure in this article (paywalled):

Market Expansion Overseas
The decision was made to set up subsidiaries in the US and West Germany in order to ensure direct control over these important markets. Perceptions of an appropriate strategy for exports were influenced by Sinclair having recently set up a US subsidiary. This attempt to maximise control over export markets created considerable pressure on the home base; it involved a major commitment of resources, whereas alternative strategies would have been less costly. For example, collaboration with a local distributor, as occurred in Australia and Holland, or the establishment of franchise arrangements would have reduced the level of expenditure abroad. Further, local information about US consumer preferences would have obviated Acorn’s complex technical efforts to make the BBC machine compatible with US television monitors; US home computer users expect to use a dedicated personal computer monitor.

(nicked from the Beeb816 thread)

A bit of progress on our Beeb816 project

If Acorn hadn’t tackled the US at all, they wouldn’t have run out of money and been acquired by Olivetti, perhaps

That was part of it, but the warehouse full of late and unwanted Electrons not generating projected cashflow might’ve been their bigger problem.

Acorn tried to access North America through Canada, which has its own special set of cultural hurdles that they’d have to get over. They had a tiny but locally intense presence in the waning days of the Acorn Atom: seems a bunch were shipped here on clearance, and small computer stores sold them off very cheaply. For several people I know in Toronto, the Atom was their first computer, and they still have a soft spot for that machine. There was even a user group: Atom Users’ Group Canada.

One local school board (East York, now part of the city of Toronto) used BBC Micros in their schools. The machines were fully modded to comply with Ontario’s very specific yet weirdly antiquated electrical system. These were almost all destroyed some time in the 1990s, but I’ve seen a couple in local collections that may be from the schools.

Oh, thanks, I didn’t know that connection. Thanks also for the Oak Leaf newsletters. 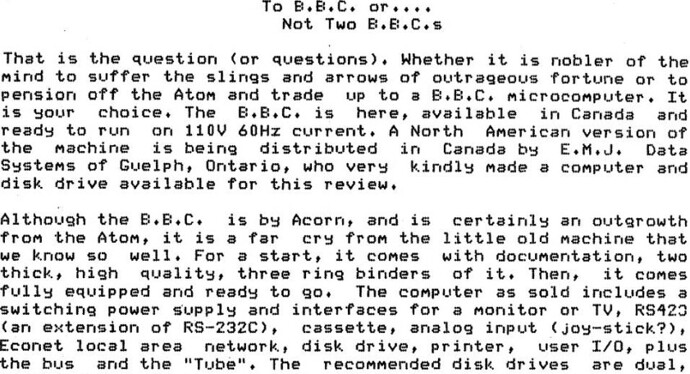 Ouch. That price point of $1500 would be a non-starter given the already established competition at the time in North America. Even that import price would have been a hard sell, especially considering the expense of acquiring a PAL display and power adapters.

(Now, with RGB monitors the Commodore models could actually handle both NTSC and PAL timings, but the composite input mode could only handle NTSC color encoding.)

(Bear in mind though that there were at the time about 1.3 CAD to the USD. Still expensive though, and interesting that a personal import was worthwhile.)

Supplying the monitor with the computer is a bit of a winning move, I think, even if it does mean shipping larger heavier product and warehousing much bigger stock. Acorn missing the point that a domestic TV was not the answer was a big mistake, it seems. Really, they bit off more than they could chew: they were too small and too inexperienced to make a success of a US venture. They’d scored a windfall with their share flotation, and they spent it (in retrospect) unwisely.

Of course hindsight makes it all look simple, especially when we already know who were to be the winners and losers.

The Atom is a surprisingly versatile and expandable machine: there’s still an active community in the Netherlands, meeting monthly. And a number of modern upgrade projects.

Yeah it is a LOT clearer in hindsight. It’s easy to forget just how many computer (and video game) companies were around pushing new products at this time. Anyone who stopped to think about what they were doing would be left in the dust by a crowd of others rushing to market with whatever the heck.

In hindsight, the myriad failures are a dim blur or just forgotten. The few remaining big shots make it seem more obvious what the correct choices should have been.