1970 and other early or simple flight simulators

The recent joystick adapter thread for DOS reminded me to flight simulators. I used to play hours flying on Windows. But retro games are also of interest.
I only found here 2 notable posts, one 1979 for TRS-80 and 1983 for Acorn

The 8-bit prehistory of Microsoft's Flight Simulator
Greatest simulators - our own Hall of Fame! - #2 by Mike_Shawaluk

The first (combat) flight simulator was Sega’s Jet Rocket (1970). There are videos on YouTube. But that was an electro-mechanical arcade game.
One of the earliest video flight simulators was Airfight for PLATO 1974 (or 1975 or 1976) 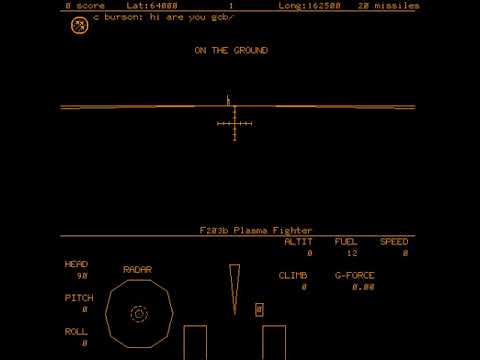 But who has that hardware? And I prefer raster graphics and early home computers.
On the ZX-81 there was Psion’s Flight Simulator 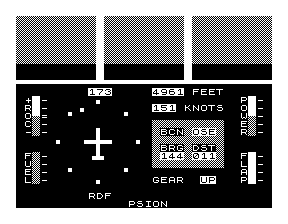 Quite early and simple was the 747 Flight simulator for several computers. Simple and monochrome graphics on Atari 400/800 and Dragon32.
The Vic-20 had Flight Path 737 Europe Hyperspin.
Also of interest this vector color simulator for transputer IMS T800

Who knows other good, very simple flight simulators (first person, not shooters) for early home computers, mainframes or homebrew systems or with ASCII art? Most simulators aren’t easy to play.

It came along a little later, but Chuck Yeager’s Advanced Flight Trainer was released for several 8-bit systems, and was very approachable on the Apple II that we had at the time. I’m sure the excellent Apple analog joystick helped.

Chuck Yeager's Advanced Flight Trainer is an aircraft simulation computer game published by Electronic Arts in 1987. It was originally released as Chuck Yeager's Advanced Flight Simulator. Due to a legal dispute with Microsoft over the term "Flight Simulator", the game was pulled from shelves and renamed. Many copies of the original version were sold prior to this. Chuck Yeager served as technical consultant for the game, where his likeness and voice were prominently used. The game allows a play...

I remember seeing a screenshot of that ZX-81 flight simulator in a magazine review or something.

I don’t know if it was any good, but I remember a type-in flight simulator for the Commodore 64 in a book. Pure BASIC, with night time graphics showing only “.” in a ^ formation to indicate the runway. The rest of the screen was indicators. So, I think it was strictly a simple simulation of landing with instruments. I never tried to type it in.

Quite the same here.

For me, it wasn’t a C64 type-in, but a similar flight simulator for CP/M, which I intended to port to the C64 (which I actually did) and to enhance by high-res graphics. However, I got caught in the graphics for a rather fancy menu system that seemed rather thrilling to me at the time and never advanced to the high-res scene part. (I guess, this was a quite typical fate for many projects then.)

There were many games for the C64. And many magazines. That simple game sounds interesting.
On Gamebase 64 I only found 85 flight simulators.

GB64.COM is the home of The Gamebase Collection of C64 games. Over 15000 games in the online database, Sid Music, Articles and reviews, Forum and extensive links section. GameBase is THE C64 emulator frontend!

Few programs that fits. Some are type-ins.
Maybe Landing Simulator (1984), some are similar like Segelflug: 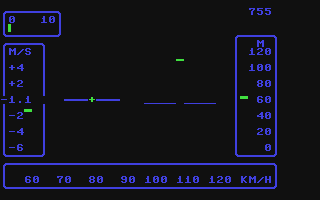 Flight Simulation from 1986 book Creating Simulation Games on Your Computer is also possible.

Another interesting sim is Flight Simulator (1983) by Anger Productions. It has a small window. So probably is quite fast. Don’t know if there are more graphics. 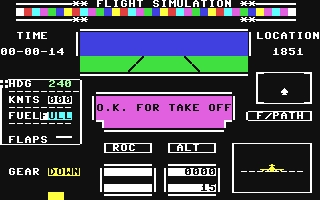 On virtual PICO-8 I found the Picowings Flight Simulator by coincidence. Nice retro-style. Looks like GameBoy, there were also some. 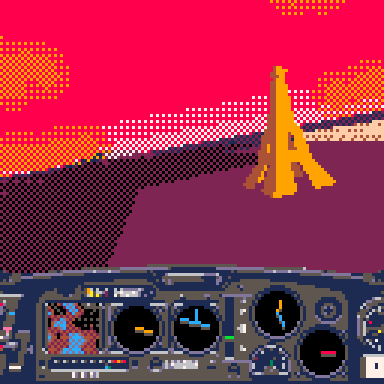 On Amiga I found flightsim written in Amiga BASIC (unknown publisher and year). Obviously very simple, but don’t know if there are more graphics. 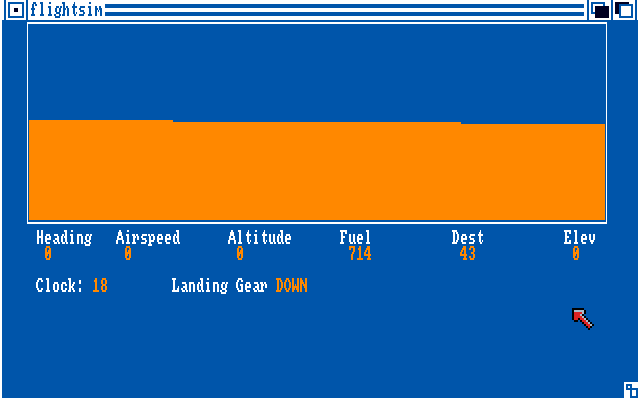 Notably, Steve Furber’s interest into computers came from a want for a flight simulator. So, in a sense, flight simulators gave us the BBC Micro and the Acorn Archimedes…
On a more serious note, I think, flight simulators did play quite an important role in driving the development of smaller systems, especially, when it comes to high-res graphics. Running a flight simulator was something that system designers had on their mental list and the capability to run them smoothly may have even been a design goal.

Small systems, except for those who build a full cockpit.
High-res graphics were always demanding for many genres, especially first person shooters.
But powerful computers were always nice to have even without graphics. Like for chess. And that was much earlier.

Oh, for an example of what can be done with low resolution pixel graphics, there’s the TRS-80 flight sim TS80-FS1 Flight Simulator by subLogic. A noteworthy port from an Apple ][ game, which would later be more famously ported to the IBM PC as Microsoft Flight Simulator. It would be updated with newer versions up until 2020, so far. 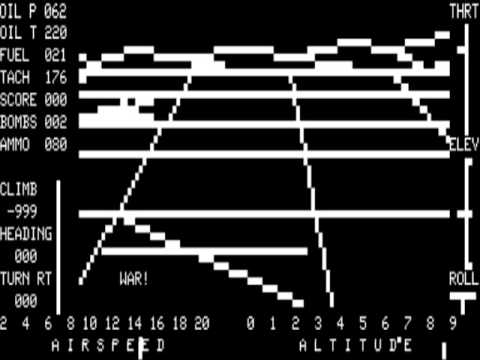 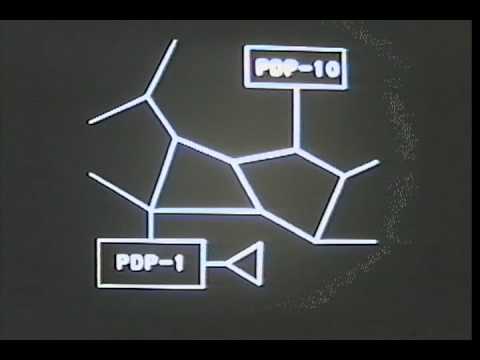 It’s interesting that this used a PDP-1 for graphics. The CRT that came (optionally) with the PDP-1, the Type 30 CRT display, was rather slow, taking 50 microseconds to display a dot on its 1024 × 1024 screen. This is just good for about 2 lines across the screen for a flicker free display at a decent frame rate (like 20 Hz). This is also the display that can be seen in the first film.
I guess, they must have used something like the Type 340, which was quite a beast, but fast and had vector modes. (http://www.bitsavers.org/pdf/dec/graphics/H-340_Type_340_Precision_Incremental_CRT_System_Nov64.pdf)

BTW, speaking of the DEC Type 30 CRT: if anyone has documentation specific to the Type 30G, or knows where to find it, the Computer History Museum (CHM) would be pleased to learn more about this. (This is the exact type running the demos at the CHM, now newly restored after it had developed some issues over the lockdown-related shutdown.)

This is reminding me that there seemed to be a type-in in Atari Basic for a simple landing simulator. I don’t remember the publication, either Compute!, or Antic, because that’s all I used to get. All there was was an airstrip, and the point of the game was you were supposed to land on it. You had a few instruments, like a horizon, and meters for altitude and airspeed. You were set up for an approach, and you had to manipulate your flaps and thrust to come in for a nice landing, or crash.

Yep. I remember subLogic Flight Simulator on the Apple II. subLogic released FS II, and then sold the product to Microsoft, which has developed it ever since.

FS I felt like the only one I could really master. Though, it had a “combat” mode, which I didn’t see the point of. There was supposed to be an enemy airbase on the map (the airfield you would see on the far end). You could hit a key (I think “W”) to “declare war,” and then enemy planes would come up to attack you. The thing was, these “planes” were just dots. You got a crosshair, but I tried shooting at these “dots,” and it was just so unrealistic. I never seemed to hit any of them. I think if an enemy bullet hit you, you starting losing oil and/or fuel, and had to land at your own base.

What I did was I just “flew around the world,” and then landed at my base. I liked that better.

You could fly off the map, and if you kept going, the simulator would eventually “wrap around,” and you’d fly back to your own base, approaching the map from the outside.

The BBC Micro has simple graphics, too. There are different Flight/Landing sims like Flight Simulation and The Aviator 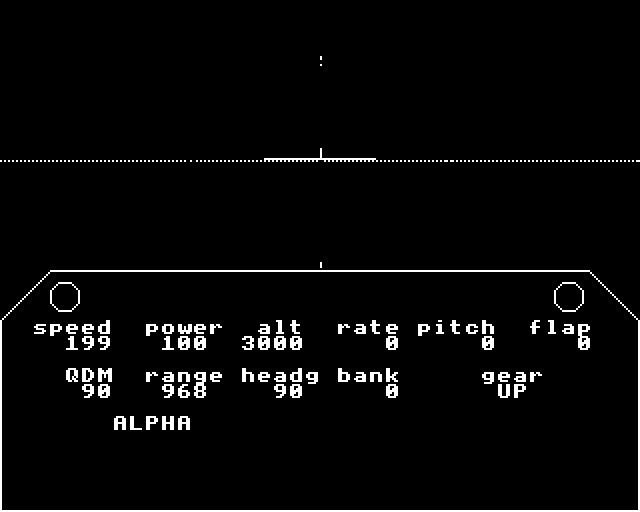 Aviator is one of the games disassembled, annotated, and explained by Mark Moxon:
Deep dives on 1980s game code: Elite, Revs, Aviator

I found again the 2013 minimalist brainfuck project, still great, I think I have to build it (there are also similar, newer projects by Johan von Konow)

I found a Brainfuck CPU on Opencores. On Google, I found another Brainfuck computer which is very minimalistic. Unfortunately, it’s just an Arduino shield, and originally I thought of a computer with regular keyboard and display. But a good inspiration. It has 4-bit, 4 buttons, 10 LEDs and a buzzer. I also found the very expensive book “Computer Architecture: A Minimalist Perspective” mentioned above, online. Maybe, there are better books, or it’s better to read several books or read webs…

I found a miniature GameBoy called 3DPCBoy, which lead to a Flight Sim (and several other games) for Arduboy. 256x128 px. Great, extremely low res. but I think it’s just a demo (but with source)

I’ve been playing around with some rendering techniques and made this simple demo: FlightSim.hex (35.9 KB) Code is here: edit: It’s completely broken in the embedded emulator for some reason 😢 It seems to work in the standalone version of...