Kevin Murrell has been busy, reconstructing this transistor-based serial computer, as seen published in the UK magazine ‘Wireless World’ as a four part series in 1967. The original design used germanium transistors, but this uses silicon. It’s a minimal machine, presently with no storage other than what you see on the front panel. Here’s Kevin’s website, which includes scans of the original articles.

This new video seen mentioned in a comment on this much older video (“Brian Crank’s home movie of the transistor-based computer he designed and built in 1967”): The 1967 design also got a writeup in Hackaday: 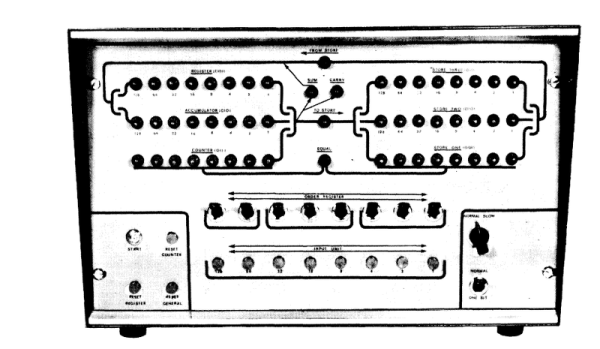 What kind of computer could you build in 1967? Well, if you were reading Wireless World (a UK magazine) and had a good bit of spare cash, you could build [Brian Crank’s] Wireless World Comput…

I believe this design is directly descended from Alan Wilkinson’s book, which I read as a youth.

Alan Wilkinson then at Spennymoor Grammar originated the design ideas, I think, which were picked up by Brian Crank, and slightly later Hector Parr at Darlington Grammar and then Barnard Castle School built first DENICE and then the BRENDA computer. Both Alan and Hector have published books about their work. See the discussion at 6502.org • View topic - OT: Wireless World's 1967 transistor-based computer project which includes a simulator for BRENDA

Good find @EdS - Kevin has made a very good looking recreation of the 1967 machine.

As I recall it used serial arithmetic to keep the transistor count down, and minimised the number of registers - again to keep transistor costs down. The original article includes the diagrams of each discrete logic gate used and sets out the costs in shillings and old pence. For the amateur constructor, this would still have been quite an expensive undertaking.

The gates are created using resistor-transistor logic RTL, using diodes wherever possible to create AND and OR functions. Flip-flops used an unusual “pulse” logic, where a short pulse could be introduced via a small value capacitor to set or reset the flip-flop. Whilst these techniques may seem a bit unusual these days, they were extensively used in the mid-1960s machines (eg PDP-8) to reduce transistor count.

I see that in 1967, even a factory reject germanium transistor was being sold for 9 old pence. 400 of these would cost £15, at a time when £20 was the average weekly wage.

A further complication was the design used neon indicators on the front panel (LEDs had yet to be developed). These needed high voltage (60V) switching transistors, which not only were twice the cost, but their high voltage supply could be a disaster waiting to happen for those constructing on stripboard.

It will be interesting to see how Kevin has implemented the logic design, whether a faithful replication of the RTL and pulse logic, or opted for a more reliable DTL nand gate design - and effectively reduced all the logic to nands.

Unfortunately any form of storage memory was prohibitively expensive, but the original author mentioned that he was considering some form of diode array in a jackplug matrix - and with hindsight this may well have been practical for a stored program ROM. RAM could have been created in the form of additional chains of shift registers but this would probably have been beyond the budget.

For a more recent discrete transistor computer there is the LCPU - a recent project in Hackaday.io by Tim Boscke.

This uses diode transistor logic, but with the novel innovation of using an LED in the base drive circuit rather than a pair of diodes in series. Not only does this provide a neat solution to improving the noise immunity of the gate, but the LED illuminates when the gate is activated. 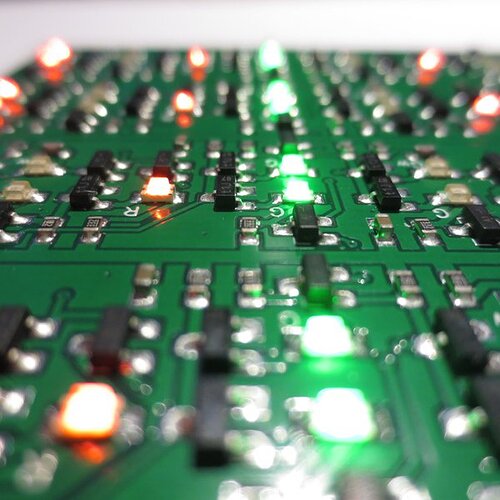 This projects tracks my efforts to develop discrete LED-Transistor logic building blocks and designing a CPU from them.